Don’t feel bad if not.

It was 30 years ago and the majority of the two teams about to butt heads in a three-Test series starting in Brisbane on Thursday weren’t alive.

Sir Richard Hadlee set the tone for the landmark 1985 lashing of a lolloping Australian outfit, snaring 15 wickets at the Gabba.

“He just bowled unbelievably well. We didn’t really have any answers, he knocked us over pretty easily.”

As was the case in Perth, where Hadlee sealed the unprecedented 2-1 series victory with 11 wickets.

The next eight New Zealand touring parties have managed just a single Test win – at Bellerive in 2011.

All of them have preached pre-match confidence at the Gabba, a venue Australia haven’t lost at for 27 years.

All of them have failed – to varying degrees.

But rarely have the Black Caps looked so well placed to walk the walk.

Australia are a team in transition, boasting an impressive bowling attack but a batting order likely to lean heavily on Steve Smith and David Warner.

Peter Nevill and Adam Voges are playing their first Tests on home soil, while Usman Khawaja has been handed the most important spot in the batting order after 27 months between games for Australia.

Smith and Warner are preparing for their first Test series as the nation’s new-look leadership team.

It’s in sharp contrast to Brendon McCullum, captain of a settled side and a motivator who has led New Zealand out of the abyss and up the ICC’s rankings.

Tim Southee and Trent Boult are arguably the best new-ball combo in the world and masters of swing, an art that has often brought Australia unstuck recently.

Hadlee ranks them the nation’s best new-ball pairing ever – but neither is prone to making big statements to the press.

“It’s going to be a tough challenge,” Southee said, epitomising the sense of quiet confidence that has enveloped their squad.

For most of the tourists there is no aura of invincibility or sense of the unknown to conquer.

They witnessed Australia crumble under pressure in the most recent trans-Tasman Test, a thrilling seven-run win.

An aborted warm up fixture in western Sydney was far from ideal preparation for New Zealand but Australia’s build up hasn’t exactly been perfect due to the postponed tour of Bangladesh.

Deprived of regular Test cricket against their arch-rival and stinging from a one-sided World Cup final at the MCG, New Zealand won’t lack in motivation.

Neither will Australia of course, having been given a fine platform to carve out their own era after the Michael Clarke years.

Plenty of comparisons have been drawn with 1985, something bowling coach McDermott objects to.

“We’d also just come home from England but there was a lot more going on. A lot of players obviously missing,” said McDermott, referencing the rebel tour of South Africa.

“It was a pretty average 18 months or so for Australian cricket. I don’t think there’s much comparison to what we’ve got going on now.

“We’ve got some stability in our bowling attack and some good young batters.”

The elephant in the room is the pink ball.

There’s a chance the inaugural day-night Test in Adelaide could be a dead rubber, in which case both sides will feel better about being guinea pigs.

If it’s a series decider, expect little reticence from Australian players who have already proven happy to speak their mind on the topic.

Regardless of where the series is placed, don’t expect too many draws given both sides’ commitment to attacking cricket.

“There won’t be any draws unless there is any rain,” Australia coach Darren Lehmann predicted. 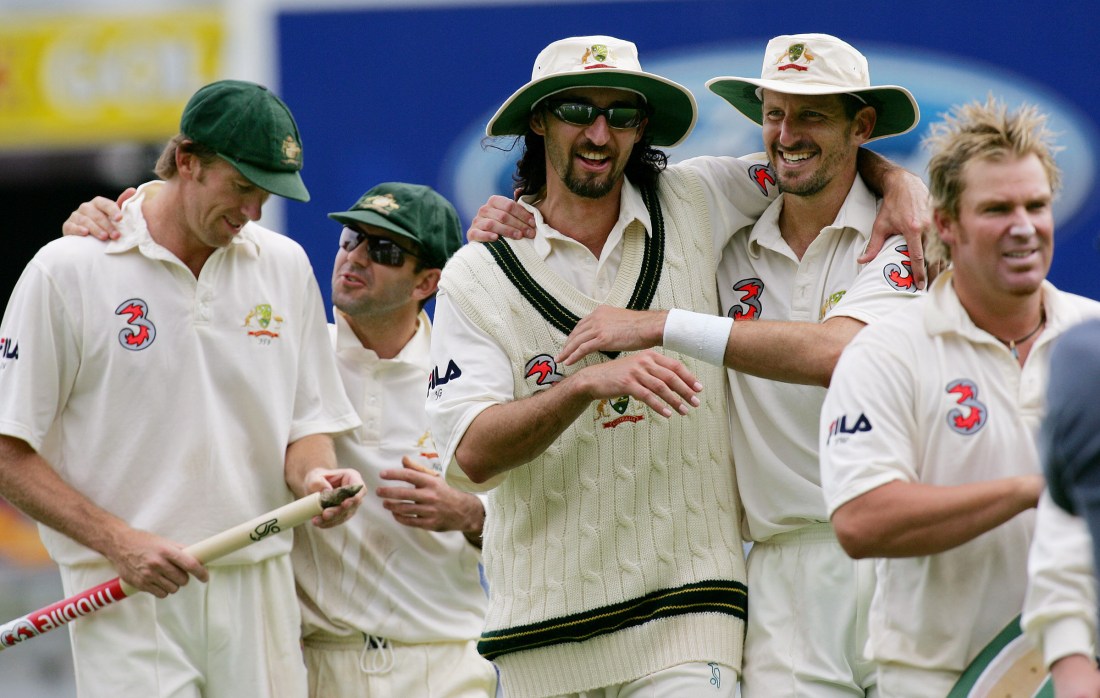 MEMORABLE TRANS-TASMAN CRICKET MOMENTS IN THE PAST 35 YEARS

Brian McKechnie was at long odds to hit a six off the final ball and tie the one-dayer, but Greg Chappell took no chances – ordering brother Trevor to bowl an underarm delivery. New Zealand prime minister Robert Muldoon called it the “most disgusting incident I can recall in the history of cricket”.

A crowd of 43,000, which remains a record for a cricket match in New Zealand, turned out to jeer Australia the first time they crossed the ditch after the underarm match. The hosts got up by 46 runs.

Defending champions Australia were expected to easily account for co-hosts New Zealand in the tournament opener, but Martin Crowe scored a century to guide his side to a 37-run win.

Warne fell one run short of a maiden Test century when he picked out Mark Richardson in the deep. Replays showed Daniel Vettori overstepped and it should have been a no-ball.

JASON GILLESPIE AND GLENN McGRATH FIRE WITH THE BAT IN 2004, GABBA

The two tailenders thoroughly embarrassed the Kiwis’ attack, both passing 50 for the first time in their Test careers. Michael Clarke posted his first Test ton on home soil in the innings-and-156-run shellacking.

Brett Lee apologised for his dangerous delivery to Brendon McCullum, but NZ coach John Bracewell was fuming. “It is the fourth time this season that he’s beamed one of our guys and he’s been apologetic every time he’s done it. That’s a lot of apologies,” Bracewell said.

The Black Caps got home by one wicket in a final-over thriller, chasing down a target of 346 thanks to Craig McMillian’s ton and McCullum’s unbeaten 86.

Brad Haddin’s gloves were in front of the stumps and knocked off the bails, but the batsman was incorrectly given out. Vettori felt Haddin should have made an effort to keep Broom at the crease, while the keeper called Vettori’s response “poor” and “low”.

Both men were fined by the match referee, with umpires noting Johnson approached Styris and made deliberate and inappropriate physical contact. Styris steered his side to a final-over win.

New Zealand celebrated their first Test win on Australian soil since 1985, getting up by seven runs despite centurion David Warner carrying his bat in the final innings.

A thrilling pool encounter between the co-hosts, which ended with Kane Williamson lofting a six to seal a one-wicket win, meant expectations were high for this match. It didn’t live up to it, Australia won comfortably but in an abrasive fashion that upset some pundits.