The 47-year-old was killed after he was hit by a car travelling in the same direction on the Sturt Highway near the Barossa Valley on November 13 last year.

This month, Modra will be inducted into the Sport SA Hall of Fame.

His wife Kerry Modra, who piloted Kieran to his first Paralympic Gold Medal in cycling at the 1996 Atlanta games, said her husband would have felt honoured with the accolade.

“We’re just so proud and I know how much he would have loved to be recognised for the time and effort he put into his sport and other young athletes with disabilities,” she said.

“I just wish he was here to receive it. We miss him dearly.”

Modra grew up on a farm near Port Lincoln and became visually impaired due to congenital juvenile optic atrophy.

A strongly built athlete, Modra began his sporting career in earnest when he took up pole vault while boarding at Immanuel College in Adelaide.

As a 16-year-old schoolboy, Modra represented Australia at the 1988 Seoul Paralympics in the javelin and the 1500m. He also won the pole vault competition at the 1989 Australian All-School Championships.

“He didn’t go on any further with the pole vault after the All Schools Championship, I think visually he found it quite challenging and I don’t think there was a Paralympics category for it so he moved across to javelin,” Kerry said.

A knee injury soon sidelined Modra from athletics and forced him into the pool as part of his recovery. He made the competition switch ahead of the 1992 Barcelona Paralympics where he won two backstroke bronze medals.

As his life became increasingly busy, Modra found he was cycling a lot to get around and decided to have a go at the sport competitively in the months leading up to meeting Kerry at a friend’s 21st birthday party in 1995. 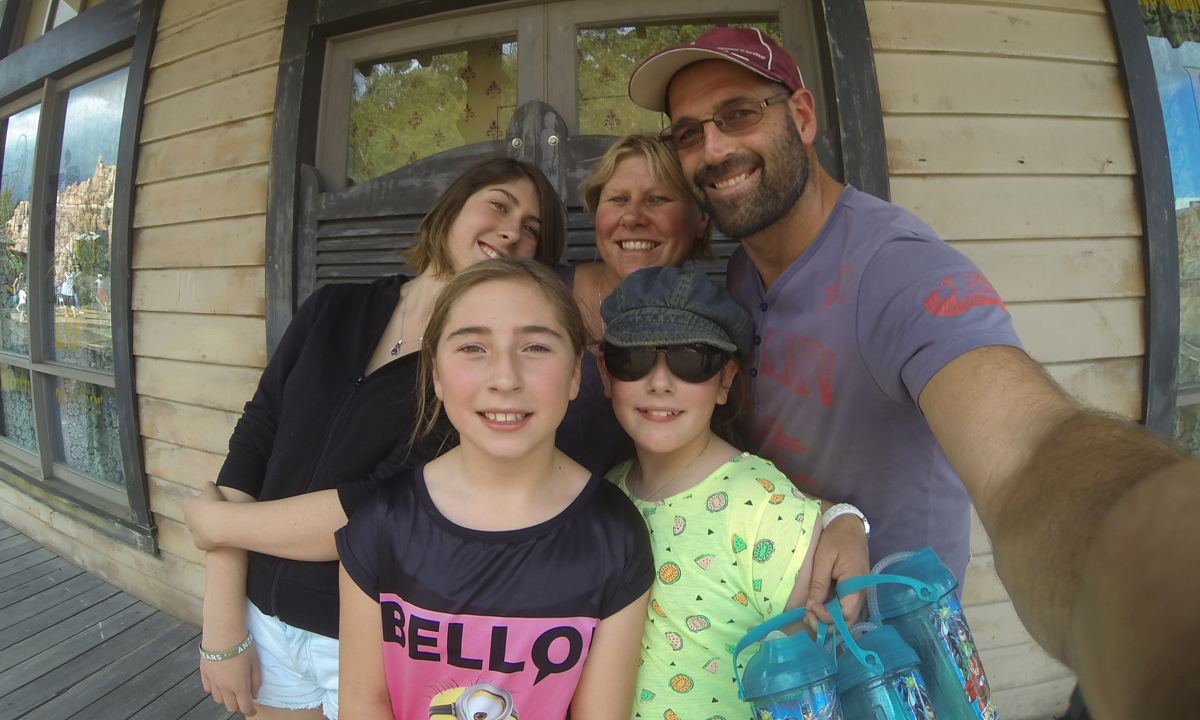 Modra with wife Kerry and daughters Holly, Makala and Janae.

“He was cycling just to get around because obviously he couldn’t drive a car so he used cycling as a mode of transport and he had enough vision to be able to do that,” Kerry said.

“He realised he could do that as a Paralympic event so he decided to give it a go.

“He went away to the 1995 European Championships and did really well so he came back and said ‘let’s jump on a tandem as a combination and see what happens’.”

The couple won gold at the 1996 Atlanta Paralympics in the sprint and went on to win three world titles together.

Kerry retired as a pilot in 2000 before the birth of the couple’s first child.

Kieran proposed in Canada on a holiday after the Atlanta Games and the couple married in May 1997.

He was named Australian Male Paralympian of the Year in 2004 and was appointed a Member of the Order of Australia in the 2014 Australia Day Honours.

Modra retired from competition in 2016 after winning his last World Championships gold medal in the Men’s Tandem 4km pursuit B and competing at the Rio Paralympics. 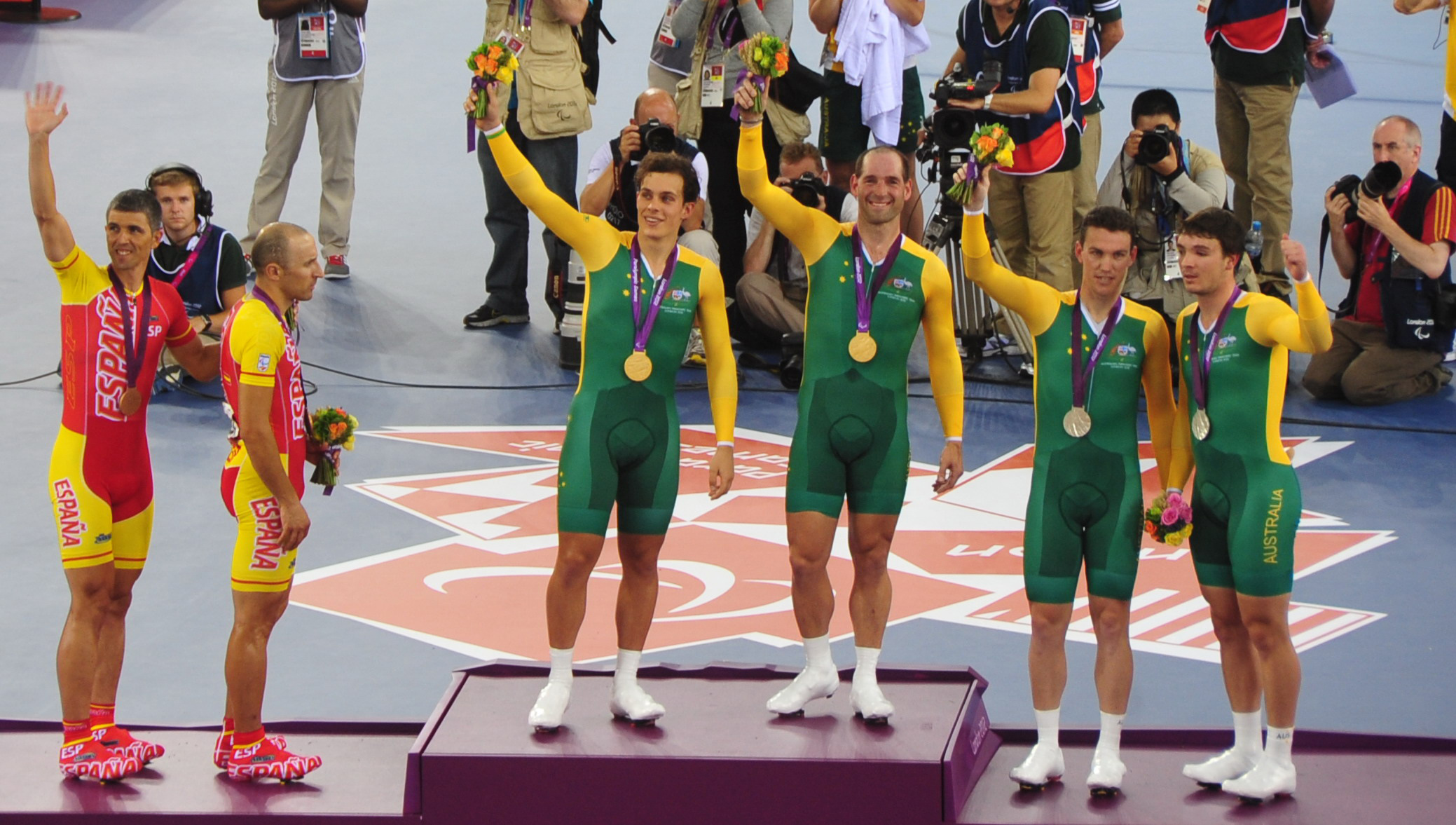 “2016 was the year he retired – supposedly – but we were never really sure because he did retire a number of times but couldn’t stay away,” Kerry said.

“He loved the environment, he really loved hearing other people’s stories, seeing their journeys and being inspired by others who’d had a difficult journey in life.

“He always wanted to enjoy everybody else’s wins.

“I think he just felt like this was what life had given him and he had to do the best with what he had and inspire other people to have a go and achieve things in life.

“He didn’t want it to stop him, he wanted to show people that anything can happen and we can all still aspire to be the best.”

When he wasn’t competing or training, Modra did some mentoring, public speaking and also odd jobs such as a piano removalist.

Since retiring in 2016, he returned to the family farm on Eyre Peninsula several times to help out his brother Mark during busy times such as harvest or seeding.

“He was a great dad and we loved spending time together as a family and he spent as much time when he was home with us as he could,” Kerry said.

“He was always training or on the ergo at home or at the gym or running with other people he knew or getting other kids out on the tandem so he spent a lot of time and he was very committed to being the best he could be – there was no point in working at 90 per cent, he was at 110 per cent all the time and the only way to get better was to put more effort in.”

The Sport SA Hall of Fame was introduced in 2010 to recognise the outstanding achievements of athletes from South Australia.

Since then, 76 SA sportsmen and women have been inducted, with five of them – Sir Donald Bradman, Bart Cummings, Barrie Robran, Victor Richardson and Gillian Rolton – awarded “legend” status.

This year will see five new athletes join the elite club, and one current hall-of-famer elevated to legend status.

InDaily has been profiling new hall of fame members in the lead up to the Sport SA Hall of Fame induction cocktail night, planned for November 27 at Adelaide Oval.

NOTE: Due to new COVID-19 restrictions, the induction event has been postponed.

Click here to find our other profiles of the this year’s hall of fame inductees.