AhMatt is considered by South Australia’s basketball community as a pioneering legend of the game – a man who overcame adversity as a kid growing up in the Northern Territory to forge a record-breaking 20-season South Adelaide Panthers career marked by an Olympics appearance and five state titles.

His reverence on and off the court is likened to that of former American basketball superstar Michael “Magic” Jordan, with the pair sharing not only a name but also an uncanny ability to read play and find space.

But despite his long-list of accolades, which include being a member of the Aboriginal and Islander Sports Hall of Fame and Australian Basketball Hall of Fame, it is only now – 37 years after his death – that “Magic” AhMatt is being recognised alongside South Australia’s greatest sportsmen and women in the Sport SA Hall of Fame.

“I didn’t think it was ever going to happen to be honest because he’s been gone for 39 years and every year it goes past you think there’s another year that goes by,” his wife and fellow former South Panthers player Helen AhMatt says.

“He was a little bit like Magic Johnson, but he was before that time so he was not copying anyone.

“He was just a freak of the game.”

From Townsville to Tokyo

AhMatt had a challenging start at life.

Born in Townsville in 1942, his mother died from birth complications and he was left in the care of his father, who fostered AhMatt out to a family in Darwin.

Growing up, he was natural all-round sportsman, excelling at everything from tap dancing to tennis, but it was basketball to which he took a real shining.

In 1959, a then tall, skinny 16-year-old AhMatt had reached the top basketball league and travelled to Adelaide to represent the Northern Territory at the Australian Basketball Championships.

“He was approached by the president of South Adelaide Basketball in 1959 towards the end of that year,” Helen says.

“He made his mark at South and they just loved him and they really nurtured him into the star that he became.”

“You never knew where the ball was going to go – he would always find an open player and he could thread the eye of the needle,” he says.

“For us old people – those of us around when he played – we often when we talk about the legends of the past, he is always referenced.”

In 1964, AhMatt became one of the first two Indigenous Australians’ to represent Australia at the Olympics. The Boomers eventually finished ninth at the Tokyo Games.

He went on to play in the 1968 Olympic qualifiers in Mexico City. 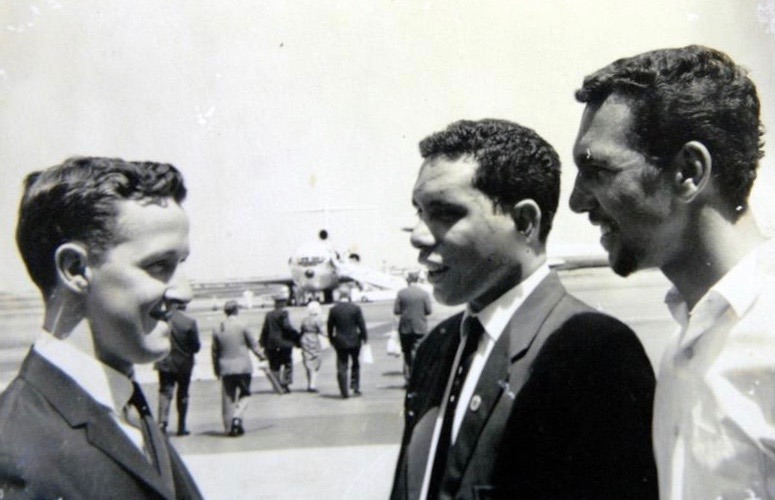 “Not many South Australians got into the Australian team and he made two Olympic Teams, so he’s certainly out there as a champion basketballer,” Baker says.

Off court, AhMatt was a role model, particularly for Indigenous youth.

“You just couldn’t copy him because his vision on the court was like he had eyes on the back of his head because the ball would come from anywhere and he always knew where it was,” she says.

“I see it when I go up to Darwin, these kids come from out bush with no shoes on and they play just like Michael did – so fluent and with tricks.

“His story was really that it doesn’t matter what your background is you can do whatever you want.”

AhMatt died in 1983 from a heart attack when he was just 40-years-old.

He left behind two daughters and one son, all of whom went on to become successful and passionate basketballers.

“My girls will come with me to the Hall of Fame induction,” Helen says.

“We are really looking forward to seeing him recognised up there all these years later.”

The Sport SA Hall of Fame was introduced in 2010 to recognise the outstanding achievements of athletes from South Australia.

Since then, 76 SA sportsmen and women have been inducted, with five of them – Sir Donald Bradman, Bart Cummings, Barrie Robran, Victor Richardson and Gillian Rolton – awarded “legend” status.

This year will see five new athletes join the elite club, and one current hall-of-famer elevated to legend status.

Note: Due to new COVID-19 restrictions, the induction event planned for November 27 has been postponed.