Glaetzer gained the “fastest man” moniker when he won the sprint title at the world cycling championships in the Netherlands a year ago. Tonight, the 26-year-old from Paradise will fly out with the Australian team as he attempts to become the first rider since 2010 to successfully defend the title, at the world championships in Poland from February 27 to March 3.

We caught up with Glaetzer last week to see how his title defence is shaping up.

After a string of solid performances at World Championships including a Silver Medal in 2016, you finally won gold last year. How does the title of fastest man in the world on a bike sit with you?

So many people aspire to have that title and there’s athletes out there who would give anything to be in my position so I’m grateful that I’ve had the success. It’s going well so far but at the same time you realise as an athlete that it can change in an instant – one bad injury or one bad accident and it could be all over. I’m loving my success at the moment, I’m thankful that it’s going well and hopefully it can keep going and I can remain the fastest for a few more years to come.

How is your form going into this year’s world titles?

It’s so tight at the top with the men that it’s really hard to feature again the year after you win but I’ve had an awesome season as world champion winning three out of four World Cups and there’s just one more sprint competition left to get it done. With all the data that’s come out, I’m just as good as I was at the same point leading up to the Commonwealth Games and I was in the form of my life then so it’s all looking good. It’s not going to be easy, as history has shown, but it’s definitely a challenge that I’m going to go full steam ahead to achieve. If I can clinch the gold again it’ll be a sign and a showing of strength to the world that I’m here to stay and that I’m gunning for the Tokyo (Olympic) gold for sure. 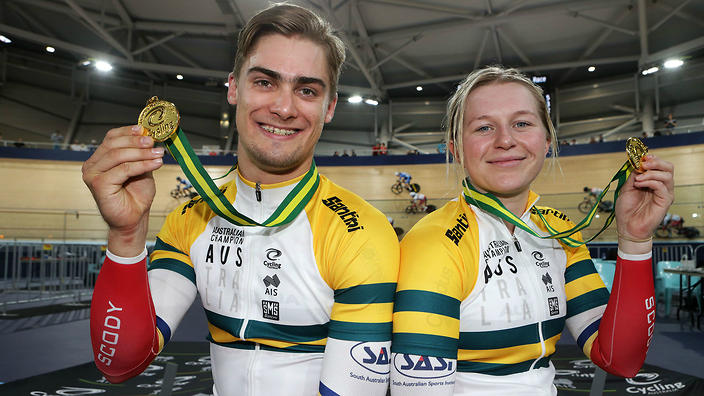 How do you handle the pressure?

In the past, I haven’t been too good with it, to be honest, but the more I’ve raced and the more experience I’ve gained, I’m getting better and better at just accepting the situation for what it is. I’m in the business of pressure and expectation so you need to be good at dealing with it no matter what level you’re at so it’s something I’ve become comfortable with. It’s just another added challenge of the sport – yes you may be fast and winning races but there’s also that expectation so you need to manage that to continue those good results. It’s an interesting game because the more you win, the more you are expected to win and the more the pressure mounts. I’m now the guy who is hunted a little more rather than me hunting others so it’s a new challenge and I’m enjoying it and stretching myself in new ways.

You broke the sea level Kilometre Time Trial world record at last year’s Commonwealth Games – why aren’t you competing in that event at the world championships?

It’s not an Olympic event and that really hampers our ability to focus on it because we are such an Olympic-focused sport. If it’s not at the end of the program, like it was last year, then we don’t do it. This year it’s actually the day before the sprint competition, which is the biggest event for me, so we had to make that tough call. It’s an event that can hurt you pretty bad so even though I’m probably in the top two or three riders in the world at it, it’s something that I’ll have to miss to make sure the Olympic event has priority. It’s a shame – because it’s a great Hail Mary event and when it’s on the final day all the big hitters can have a crack at it and it’s a true world title.

These world champs I’m really only racing the Keirin and the Sprint.

As it stands I am the reserve for the Team Sprint. We’ve gone for a different strategy there to push for some extra improvement so we can fight for the medals in Tokyo. We’ve given a couple of other guys an opportunity in the Team Sprint to get a greater improvement in the team as a whole so I can hopefully slot back in and we’ll be back in medal contention.

You’ve grown up in Adelaide and still live at home, how much of an advantage is it to be able to be based here throughout your career within a comfortable distance of the velodrome?

It’s a huge advantage really being from Adelaide and the national program being here.

I haven’t had to uproot my life and move interstate – I’ve been able to stay grounded in the family home and have support from my local friends and family through my years growing up here. I’ve got a good balance of training and life outside of sport too, which is important as an athlete because you can go a bit stir crazy if the only thing you think about is your training when you’re at home. I’ve really thrived with this situation. Being so close to the track and having a really good life balance, in general, is pretty critical to having a successful career on the bike I think.

What does your training involve?

It’s all about making sure we’re fully fired up and powerful and doing things quickly. All the training’s in the gym or on the track – we try and minimise the time the slow things take because we don’t want to be slowing down those fast-twitch fibres. We do two to four gym sessions a week in the mornings when we’re fresh and it’s really where we get all our strength from as sprinters. It’s all the big gross movements – squats, deadlifts, Olympic lifts and the leg press is a big one for us. Essentially leg day is every day for us. It varies a bit but we’re always going for max strength and the development of power.

How much do you leg press?

For me, it would be 330kg for three reps on one leg and I’m not even the strongest on that exercise. Some of my teammates do 350 – it’s incredible.

You’ve ridden previously in Poland at the velodrome in Pruszkow where the World Championships are being held, what are you expecting?

It’s a good velodrome. They heat it, which is very necessary with their climate this time of year. Most tracks are quite similar but this track is a bit quicker than my home track here in Adelaide so I’m looking forward to a bit of a jump in tines in the sprint qualifying in particular.

How is the Australian team looking as a whole?

I think we’re going to see something special from the team pursuit boys in particular and Steph Morton is an incredible athlete. Just the times she is putting down in heavy training through the World Cup season is near mind-blowing. It’s exciting to watch your teammates step up and get into the realms of fighting for gold after seeing all the hard work they’ve put in. This year at the Worlds I think we’ve got a really strong well-rounded team in sprints and endurance so it’s going to be exciting to see what sort of results come out of Poland. It’s a good form guide for us and a good stepping stone towards the Olympics next year.

What have you got planned for the rest of the year?

This is our biggest race of the year by far and once this is finished we’ll have a few weeks off. I’ll be then going to Japan for three months to race in the Keirin series over there, which is awesome fun that I experienced last year.

The next biggest race will be the World Cup that we are hosting in Brisbane. That’s going to be exciting and we are planning on giving that a red-hot crack as well with a home crowd on a fast track. The Japanese contract is a blessing to be able to live there for a significant amount of time and train on the Olympic track is quite a good advantage. It’s a great opportunity for me to have a bit of fun and by the time I go back to Tokyo for the Olympic Games, it will feel like going back to my second home so it’s a great bonus to be able to race over there.