The first of five SuperFoiler Grand Prix regattas begins this weekend at Outer Harbor, pitting six of the new ultrafast trimaran superfoilers against each other on a 2km circuit.

The brainchild of Australian sailing entrepreneur Bill Macartney, who shook up yachting in the 1990s with his 18-foot skiff grand prix, the superfoilers promise spectators not only a new form of sailing but also a new viewing experience as each boat and its three crew is wired with cameras and sound.

Macartney says the boats have been built from the foils up to maximise the concept of flying sailing, which allows the small boats to reach speeds of more than 30 knots on less than 15 knots of wind.

The speeds and the tight track promises lots of thrills and spills, so much so that each race boat will have a chase boat tailing it with a medic and scuba diver.

Macartney and his son Jack have spent the past four years developing the series to revolutionise sailing in an effort to sign on the best sailors to inspire more people to take up the sport.

“The boats and concept was designed to attract the attention of the world’s best flying sailors, such as Glen Ashby and Nathan Outteridge and they have all loved the concept,” says Macartney.

“It’s about sailing competing successfully with the 50 other sports kids can be attracted to. It’s very exciting, fast, extreme. You’ll be able to see and hear the adrenaline and it will no doubt give sailing a huge lift in profile, it will see the sport flourish.”

The entire series will be broadcast by Channel 7, with live streaming on the day and an edited package taking advantage of the multiple cameras and sound to give viewers a feel for what it’s is like to hurtle around a tight course at 55 km/h.

“You can hear the dialogue between the three people,” says Macartney. “What does good teamwork look like? How do they deal with fear? We have the ability to give the audience those experiences.”

Luke Parkinson, the skipper of the tech2 SuperFoiler and a Volvo Ocean Race winner, says he is attracted to the series because he wants to learn to sail a boat that no one had sailed before and to go faster than ever on a trapeze.

“This weekend in Adelaide is about taming the beast and getting around the track,” says Parkinson, who will be joined by fellow Australians and America’s Cup winner Sam Newton and Ayden Menzies on the tech2 boat.

“I am looking forward to learning what it’s like to be at the edge of control,” says Parkinson.

“We have a great skill base for this type of racing and we all get along well. That should get the tech2 SuperFoiler around the course safely and fast,” he says.

“We are looking forward to giving the ‘dream team’ a few nightmares.” 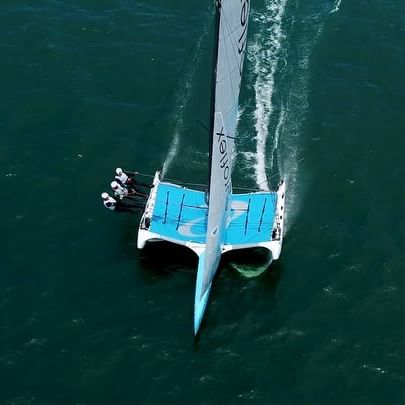 Macartney said Adelaide’s perfect conditions and ease of access made it the logical choice to host the world premiere.

“I remember the days when racing the 18-foot skiffs that more than 9000 people would line the docks of Outer Harbour to watch. So when we developed the foiler concept I immediately thought of launching it in Adelaide,” Macartney says.

“Outer Harbor is our favourite venue because it gives easy access to spectators, television crews, has an excellent breeze for racing and it’s not too tight.”

Racing starts on Friday 2 February at 4pm from the Royal South Australian Yacht Squadron. Weekend racing is from 1pm on Saturday and Sunday. Hospitality packages are available, which include opportunities to be up close to the racing on boats on the course. The best public viewing is from Lady Ruthven Reserve.