One of the pre-race favourites, Porte was in a group of seven riders, including race leader Chris Froome, and came off his bike at a speed of 70kph on the descent of Mont du Chat – the last of seven categorised climbs on a brutal stage.

The Australian is reported to have braked to avoid the wheel of another rider and subsequently missed a downhill left-hand bend, leaving the tarmac, cartwheeling across the road and bowling over another rider, Dan Martin, before hitting a grassy bank.

He was immediately treated on the side of the road before being carried into an ambulance on a stretcher and taken to hospital for examination. 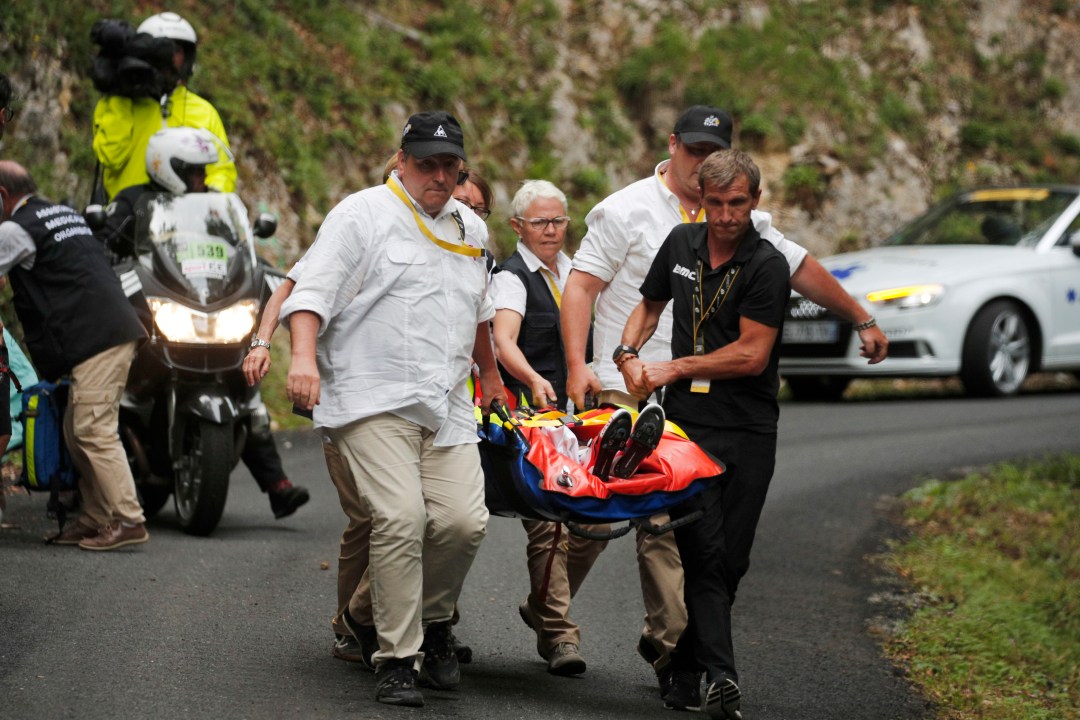 Richie Porte is carried to an ambulance after crashing in the descent of the Mont du Chat pass. Photo: Christophe Ena / AP

“If everything goes to plan, Richie could be back on the bike at the beginning of August and slowly build his fitness up from there.

“Based on Richie’s recovery, we will re-evaluate his program for the rest of the season in consultation with BMC Racing Team management.”

BMC sports director Fabio Baldato said the 32-year-old Porte “had a lot of pain” but had remained conscious through his ordeal.

Baldato added that Porte had ridden the descent four times before the Tour, including once in racing conditions during last month’s Criterium du Dauphine.

Uran of Cannondale-Drapac won the stage ahead of France’s Warren Barguil (Team Sunweb) after a photo finish, with Briton Froome third.

“They told me I had won but I was convinced Warren had won it,” Uran said.

Team Sky’s Froome retained the overall leader’s yellow jersey on a day when his lieutenant Geraint Thomas, who was second, also crashed out of the race.

Welshman Thomas suffered a broken collarbone in a crash on the damp descent of the Col de la Biche, before Porte’s incident.

Defending champion Froome was attacked by Fabio Aru just as he suffered a mechanical issue on the last climb, before the Italian finally adhered to the Tour’s unwritten rule that challengers shouldn’t attack the race leader when he’s in trouble not of his own making.

“I had a mechanical problem with my gears, I had to change bike,” Froome.

“I want to thank the other riders, who did not attack.”

Froome added he did not see Aru attacking past him as he raised his arms to ask for assistance.

Monday is a rest day and the fight for the overall title is set to resume next Thursday with the first big Pyrenean stage.