Although at least my children, aged almost eight and 10, are enjoying the intrigue. Which gives you some indication of the level at which it’s being pitched.

The two of them have, for the first time, been rather engaged by the whole thing – and their observations can be quite telling for someone like myself who takes every vapid slogan and dubious pledge with the proverbial grain of salt.

The impact of those much-maligned corflutes, for instance, became clear to me yesterday, when my daughter (almost eight) pondered a sign on a nearby Stobie pole as we idled at the lights, and then earnestly asked me: “Can we put our family first?”

You won’t find a clearer explanation as to why the former Evangelical-based movement erred so badly in allowing its brand to be usurped by the now-defunct Conservatives.

She also says she would like to vote for ‘Peter Malinauskas’. For no particular reason – she just seems to like saying his name.

My son, however, at 10-and-a-half, is more policy-driven.

He reckons we should vote for Scott Morrison (he means Steven Marshall, which might give some indication as to how much the federal and state brands have become intertwined) because he’s heard he wants to spend “heaps of money building a great big basketball stadium”.

He likes basketball, you see.

Not that the gist of Labor’s sales pitch has been entirely lost on him. The other day he wandered over as I was reading an online article about the major parties’ duelling Aquatic Centre funding proposals, which was naturally illustrated by that ubiquitous pic of the Opposition Leader with his shirt off.

But, of course, there’s a lot still to work out about what Malinauskas is promising.

He refuses to detail how his various pledges fit within an overall budget framework, because the costings will be unveiled on election eve and ‘that’s the way we’ve always done it’.

Which is a bit of a cop-out, to be frank: a leader purporting to be a breath of fresh air, tacitly promoting a new political approach, but justifying a month-long delay in explaining how he’d pay for his promises by citing age-old convention.

And indeed, Labor’s campaign has been entirely conventional, from the set-piece photo-ops to the rousing launch before the party faithful. 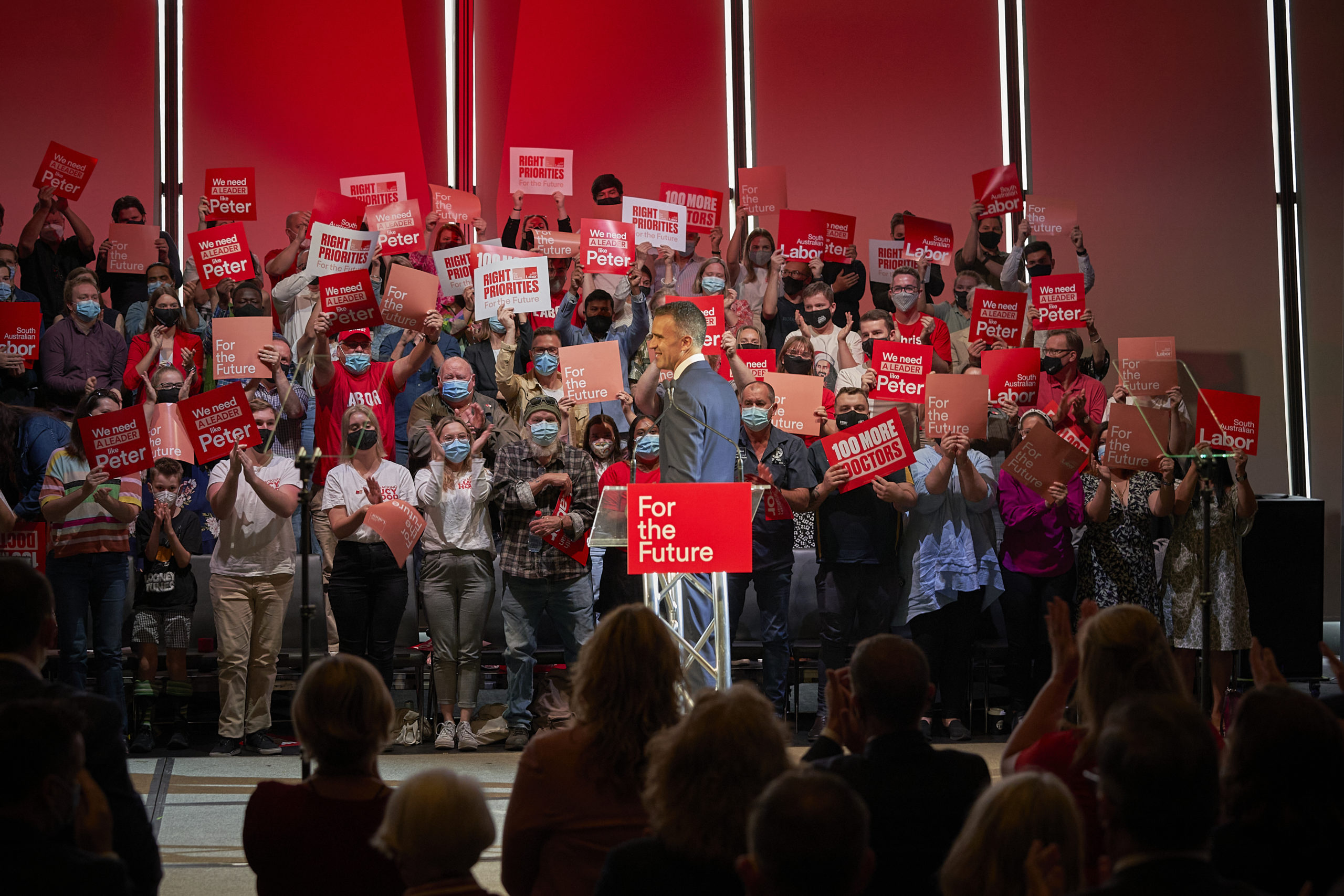 For the future, but borrowing heavily from the past. Photo: Ben Baker / Supplied

But the actual numbers do require scrutiny because that campaign is, in large part, predicated on one particularly obvious fallacy: that Labor’s health plan is entirely funded by its pledge to ditch the Government’s convention centre annex, which I prefer to call ‘Teeny Arena’.

Even if the Libs are re-elected, the bulk of the construction wouldn’t take place until after the 2026 election, with most of the expenditure pushed out into the following two years.

Labor’s line is that it will bring that funding forward, and use it to pay for its health plan.

Putting aside the obvious point that this isn’t how budgets work, it still means there is an immediate impact across the forward estimates.

But even putting all that aside, the campaign spin neglects the fact that Labor already played its ‘apples with oranges’ policy card, last year – when it responded to Marshall’s Teeny Arena announcement with its own commitment to build a 200-megawatt Hydrogen Power Station.

The cost was roughly the same, with the pitch intended to emphasise that Labor’s own $600 million commitment was about serious industry policy, in contrast to Marshall’s bread and circuses.

(This is the same Labor Party, of course, that was re-elected in 2010 on the pledge to bring footy to the city through a rebuilt Adelaide Oval, but anyway.)

The good news for the green lobby is that both the state’s major parties have demonstrated a clear commitment to recycling: namely, that both keynote policies have been spruiked before – albeit via a delicate toe in the water, rather than the full-bore belly-flop while shouting “Cannonball” approach they’ve respectively employed this time round.

Those of us with long memories (or who are merely gluttons for punishment) would have had a sense of déjà vu when the Premier announced at a 2021 Property Council lunch his grand(ish) plan of a new city arena to host basketball games, concerts and the odd big-ticket conference.

“We believe that a world-class stadium, with a roof, in the City West area or the railyards area, is the best solution,” he said.

And two years before that, Marshall’s sometime predecessor as Liberal leader Martin Hamilton-Smith stood at a similar gathering and outlined his own ‘vision thing’ for the Adelaide Riverbank: a glitzy new stadium, yet not just a sport stadium but a ‘precinct’, with a revamped Convention Centre, the Entertainment Centre brought into the heart of the CBD, a brand new plaza and a children’s science and technology museum.

While MartyWorld – as it was then derided by the Labor Government of the day before they pilfered most of it, later swiping Marty to boot – never quite came to fruition, most of its main tenets have either been ticked off or are in train by now.

Except for the science and technology museum of course – won’t somebody think of the children!?

But even MartyWorld wasn’t a new concept – it was a reworking of a Riverbank Master Plan by the former Olsen government.

“The Riverbank precinct project is potentially the most exciting development project seen in South Australia for many years… the Master Plan [will] provide for new cafes, restaurants and commercial spaces to encourage more South Australians and visitors to use the precinct at all times but particularly during lunch times, evenings and on weekends,” we were told at the time.

Fortunately, you don’t need as long a memory to recall the most recent incarnation of Labor’s hydrogen plan – they announced it in the dying days of the Weatherill government. Albeit with far less fanfare than the Malinauskas 2.0 version.

At the time, it was billed as a potential “hydrogen export industry”, with hydrogen refuelling stations across the state and a longer-term aspiration to bring international investment through an export industry to serve growing hydrogen economies in Japan, Korea and China.

Four years on, it still sounds compelling – except that according to the independent Infrastructure SA, it’s half-baked.

The advisory panel’s own assessment of hydrogen production is that it can’t become a viable export industry without  “a critical piece of infrastructure” – namely “a suitable port”.

“There is significant potential for the growth of the local industry, provided appropriate hydrogen port infrastructure is in place,” Infrastructure SA reported last year, recommending “further analysis be undertaken to determine the required infrastructure solution”.

Its boss, Jeremy Conway, told InDaily at the time the likely cost of a port for export scale “would be hundreds of millions of dollars”.

“I haven’t reviewed the Labor proposal [specifically], but from what I understand their costings are around production of hydrogen [so a port] would be needed in addition,” he said at the time.

Which, while it could be privately funded, effectively doubles the stated outlay.

Malinauskas this week effectively kicked the can down the road, saying the point of the plant was “all about making sure SA has first-mover advantage in the establishment of a hydrogen industry”, and calling export “the long-term ambition”.

“This is a first step in ensuring… we are best placed to capitalise on that opportunity,” he said.

Which could be said to be akin to investing in a fine bottle of Grange, only to forget to buy a bottle-opener.

Not that the Labor leader agreed, saying he “respectfully completely disagreed with that attempted analogy”. 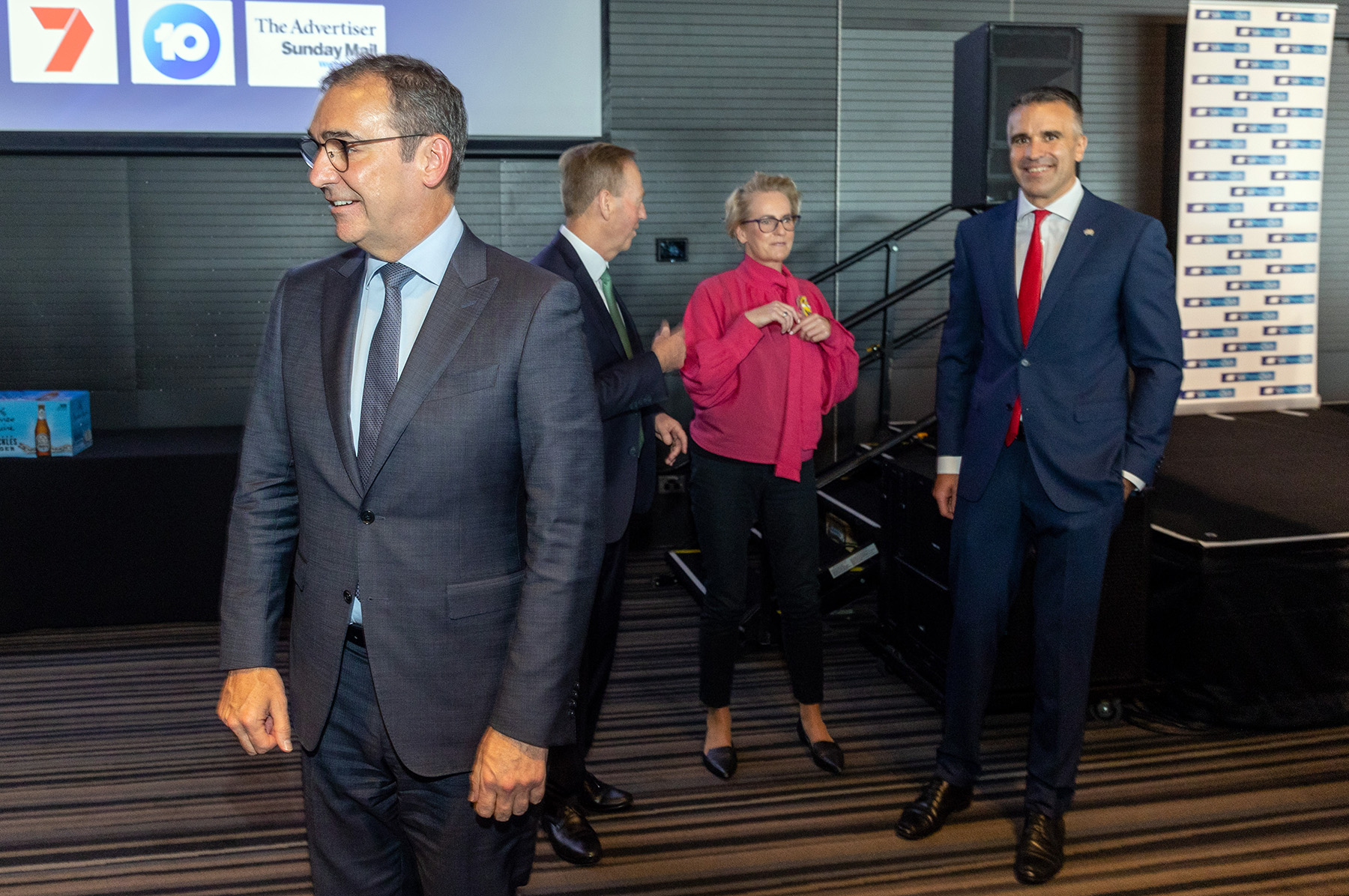 Malinauskas’s campaign is predicated on looking ahead, but his pitch borrows heavily from the past. Photo: Tony Lewis / InDaily

So, yes: it’s fair to say the 2022 state election campaign hasn’t hit any great heights – pitched, as it is, at the level of engaged primary school kids.

And that may well be by design.

Labor’s costings remain deliberately clouded, while the Liberals have been so committed to their ‘underpromise’ mantra that they’ve gone some days simply talking up unrelated federal funding commitments.

Cannier political observers than me still can’t work out if this is madness or genius – or perhaps some unique combination of both.

During the last campaign, then-Labor MP Tom Kenyon told me that in every election “there’s an air war and a ground war”.

“The air war is pamphlets, advertising – it’s a B52 that flies in and bombs the crap out of everything,” he said.

“But the ground war is door-knocking, street to street, that kind of stuff… it takes time. You can’t roll out an electorate-wide campaign in a few weeks.”

Advice Kenyon, who is now running on the Upper House ticket for the revived Family First, could well have followed himself, given his new party’s lower house candidates were all unveiled mere weeks out from polling day.

But the point was well-made, and it was one the Libs learned to their detriment in 2010 and ’14, and turned to their advantage in ’18.

To win an election, you don’t need to win the hearts and minds – merely the votes and preferences of a majority of residents in a select few marginal seats.

And there are micro campaigns rolling out in these seats, underpinned by detailed local info squirrelled away on party-owned databases, that most of us simply don’t see amid the macro media coverage of Marshall and Malinauskas trading promises and blows.

Every recent published poll puts Labor ahead on a statewide vote – but swings in individual seats are never uniform, and as strange as the Liberal campaign has been it seems beyond reason that they would have simply forgotten the lesson learned over 16 long years in Opposition – that it is the seats won, not the statewide vote, that will determine SA’s next government.