Late in October, Steven Marshall sent an upbeat message to a WhatsApp group of his Liberal MPs.

“Dear colleagues,” it read, “today at 1.15pm I will be giving a press conference to announce the date we will get to 80% double vaccinated and open our borders.

The Premier signed off by enthusing to his colleagues that he was “very happy with where we’ve landed” – followed, as Notes On Adelaide recently detailed, by a pair of airplane emoji.

That same morning, SA Health was telling InDaily it was unclear when South Australia would reach its 80 per cent double-dose vaccination target for people aged 16 and over – with the projected date changing “frequently” – but that we were on track to reach the target “sometime in early December”.

In the event, the date announced by Marshall only hours later for the border reopening was somewhat earlier than that – November 23.

All of which, for better or (more generally) for worse, is fairly symbolic of the manner in which things have played out in SA ever since.

An upbeat political message is invariably tempered by a more sober missive from SA Health, creating an overall sense of uncertainty.

In the past week, that uncertainty has become overwhelming.

Since that infamous media conference in which the Government announced it would not be reimposing border restrictions – despite Chief Public Health Officer Nicola Spurrier’s recommendation to do so – the public health messaging and advice has lurched all over the shop.

The ‘compromise’ concession to Spurrier’s fears of the Omicron variant was to throw a few new “speedbumps” in its path – namely, forcing interstate arrivals to not merely get tested on arrival, but to isolate until they had received a negative test.

This was abandoned without much fanfare a few days later, once authorities realised prospective travellers would sooner give SA a miss altogether than have to adhere to such a cumbersome stricture.

At last came the long-awaited national cabinet discussion on managing the Omicron threat, after which Marshall hot-footed it to the Property Council’s annual Christmas lunch.

“Obviously we’re still concerned about Omicron,” he told the event’s 1300-odd attendees in an impromptu interview with host Jessica Adamson.

“But the good news is that we’re now seeing that the transmissibility isn’t as high as we thought a couple of weeks ago when the World Health Organisation declared it as a variant of concern.

A mere few hours later however, SA Health put out its own update that struck a very different tone.

In comments emailed to all media around 5.30pm on Friday that were “attributable to Chief Public Health Officer, Professor Nicola Spurrier”, the agency revealed that “the Communicable Disease Network Australia yesterday updated the National Guidelines stating jurisdictions should consider increasing testing, isolation and quarantine requirements in relation to the Omicron strain”.

“Despite their high vaccination rates, we have already seen the ACT move to all Omicron close contacts requiring 14 days of quarantine,” Spurrier added.

“South Australia is also in a more vulnerable position to immune-escape from the Omicron strain given our current vaccination rates and potential for higher transmission in comparison to other states.

“With the latest advice and our current situation in mind, 14 days of quarantine will be required for all Omicron, or suspected Omicron, close contacts regardless of their vaccination status.”

She noted that SA would “review the quarantine requirements as we learn more about the severity of Omicron and as always, will put the health and safety of South Australian’s [sic] first”.

Hang on a sec.

What about the upbeat Premier breathing a sigh of relief?

What about the meeting at which the states were apparently told Omicron wasn’t as transmissible as first thought? 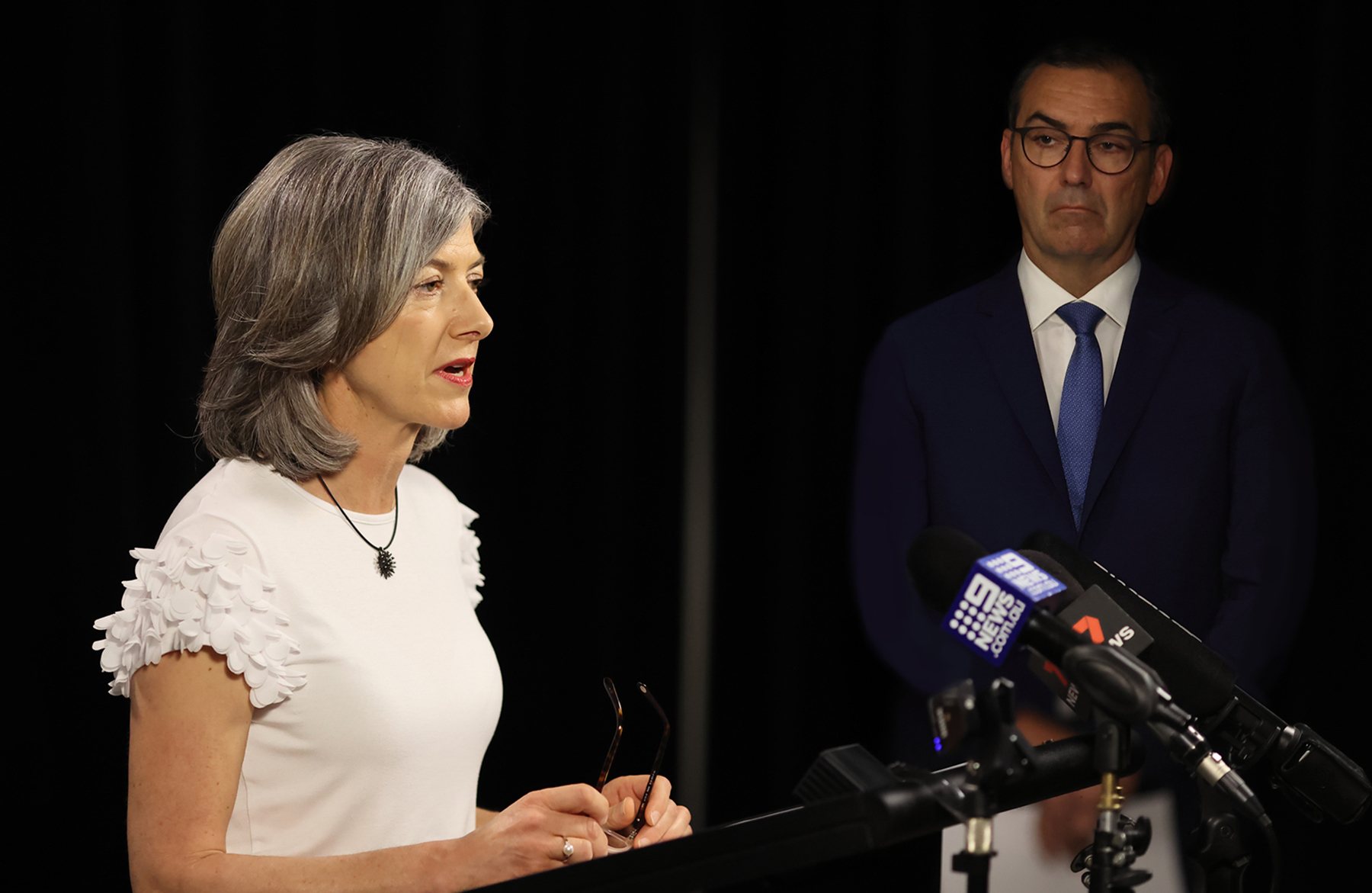 Marshall watches on as Spurrier addresses the media in an earlier briefing. Photo: Tony Lewis / InDaily

Perhaps Marshall himself wondered the same thing, because just yesterday he flagged the extended quarantine for fully-vaxxed folk who fall foul of Omicron would not be long for this world.

“I’m hopeful we’ll have some good news for those people who are in 14 days’ quarantine and who are fully vaccinated later this week,” he told media.

He told ABC Radio Adelaide that “more information is coming in all the time and I’m hopeful that in the next couple of days we could reduce that down to seven [days] for those people that are fully vaccinated”, noting: “Nicola Spurrier has made it very clear she’s going to look at this very carefully.”

Sure enough, a few hours later came another missive from Spurrier.

“This change will align with our response to Delta cases in South Australia and will be more practical to implement given that at some point it will not be possible to differentiate between these strains as the case numbers increase.”

While those who may have been exposed to either (any?) of the state’s Omicron cases may be breathing a sigh of (relative) relief, the emerging narrative here is disturbing.

While it’s important to be nimble and agile in our public health responses, the ongoing mixed messages and flip-flopping about is merely serving to create broad confusion. And confusion is the last thing you want when selling a public health message.

It’s complicated by the fact that the Marshall Government hopes to win re-election in a little under 100 days, so the last thing the Premier would want to do is talk down how the state’s faring.

This, combined with his natural ebullience, means we get the ‘good cop’ routine whenever he opens his mouth.

Back in October, at that 1.15pm media conference to which he invited his Liberal MPs to “tune in” to find out what the government they represent was doing, Marshall flagged the easing of further restrictions by Christmas.

This was linked to SA reaching a 90 per cent vaccination rate benchmark for people aged 12 and over, but Marshall insisted: “I expect that to happen.”

As of today, Police Commissioner Grant Stevens told media the estimated benchmark was expected to be “after Christmas but before the end of the year”, with further details to be released later this week.

If Marshall is the good cop, the implied ‘bad cop’ routine appears to have fallen to Spurrier, who hasn’t appeared publicly since that infamous media conference following the COVID management meeting in which her recommendation to close borders was not adhered to.

The tone of her subsequent updates has been in stark contrast with Marshall’s ‘aren’t we lucky’ posturing, while the imposition of strict new protocols hardly underlines the notion that we should be “breathing a sigh of relief”.

SA Health rather appears to operate as a silo agency, firing off updates and Spurrier-authorised instructions intermittently, and with limited explanation.

Even the Premier himself seems about as clued in to these announcements as… well, as his own MPs are about what he’s up to.

In that context it was almost a relief when Stevens – the actual literal cop in this scenario – did his obligatory exclusive with the Sunday Mail repeating Marshall’s Friday pledge to the Property Council that the borders would stay open for Christmas.

“We want to give people as much certainty as possible,” he said.

It’s fair to say that certainty has been significantly lacking in SA since November 23, but there is one thing that has become abundantly clear: the days when the Government can unequivocally say it is relying solely on the ‘health advice’ are over.

There are other imperatives – and perhaps, with the vaccination rate now firmly above 80 per cent, that is all part of the plan.

But the delivery of clear, concise messaging – with equally clear, concise explanations for the rationale behind the decisions being taken – has suffered.

And if that continues, public support for those decisions will suffer with it.

Marshall today noted, fairly, that “there’s nothing neat and tidy about a global pandemic” – but that makes it even more imperative to avoid unnecessarily muddled messaging.

Then, doing his best ‘good cop’ routine, the Premier acknowledged community “anxiety about the Omicron variant”, but enthused that “the overwhelming feeling in our state is relief that our borders are open”.

That’s not the impression I’m getting.