The debate about the future of Australia’s interest rates is now nearly as hot as its housing markets. For weeks now, financial markets have been getting increasingly nervous about US inflation and the possibility that interest rates will eventually edge higher. The RBA, by contrast, has been very consistent in its message that low interest rates are here to stay for several years to come.

Low home loan interest rates play a major role in driving the purchasing power of home buyers and investors. Most homeowners and investors are not cash buyers but instead rely on borrowing to finance their purchases. A relatively small change in interest rates can have a dramatic impact on the cost of servicing a loan, and rates have been on a downward path for years (see the figure below). 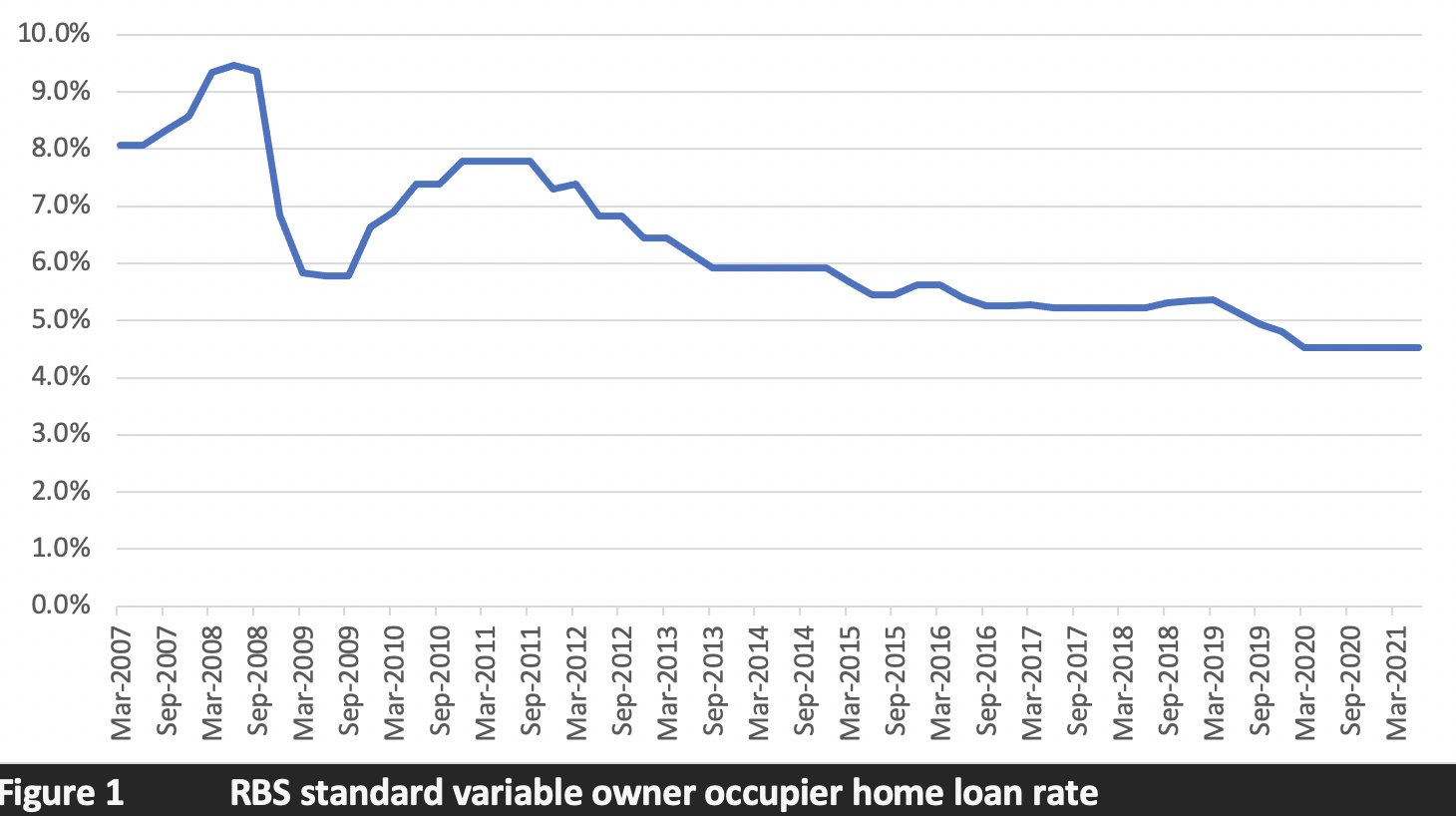 Given the importance of interest rates to home loan serviceability, it is instructive to ask what level house prices should be given the interest rate level at a given point in time.

The next graph compares Adelaide’s median house price to a hypothetical measure which we describe as the Home Buyers’ Purchasing Power Index.

This is derived by finding the maximum home loan that would be affordable to a dual-income household, with average wages, spending 30 per cent of their income on a home loan.

By comparing the HPP index to the median price, a measure of under or over ‘valuation’ can be created. 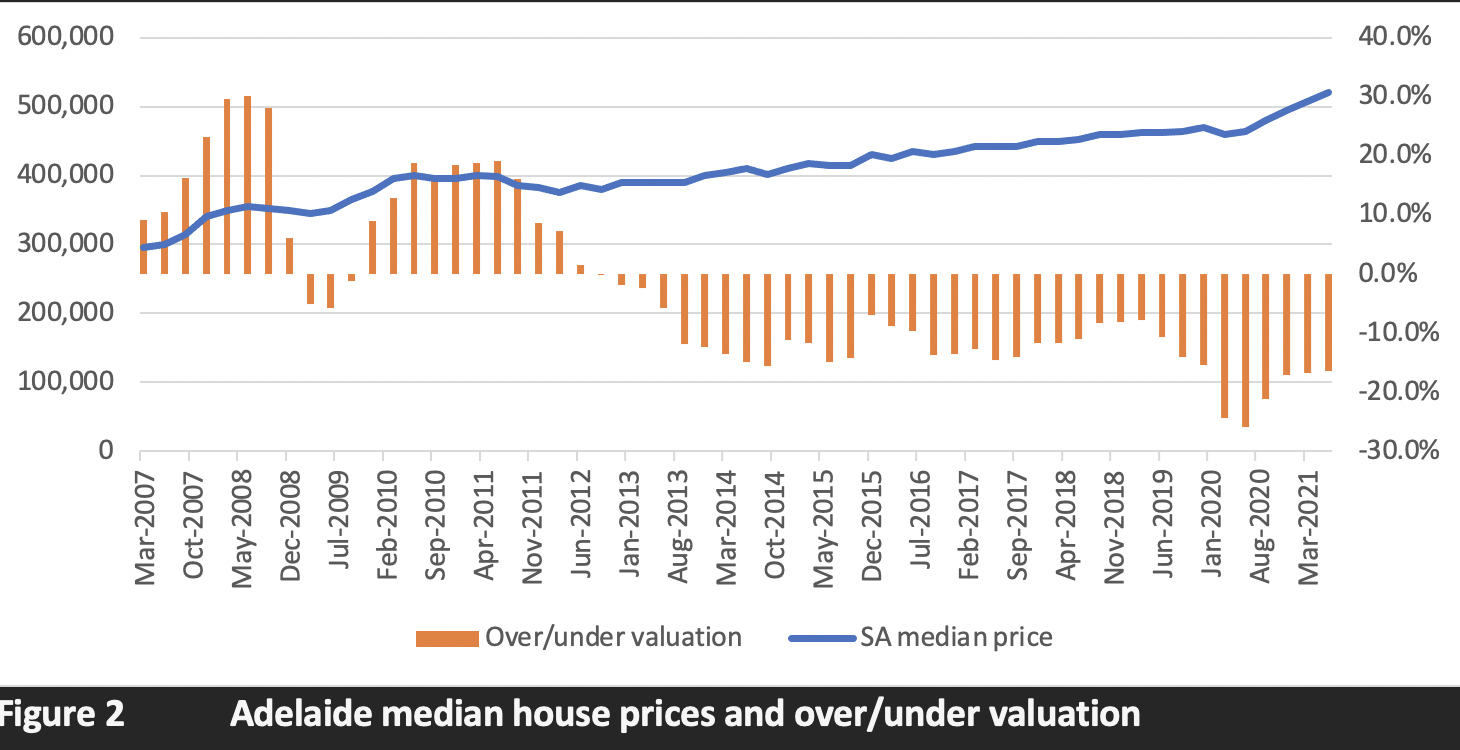 We focus on the concept of twice the median income because this measure is a much more important driver of prices in Adelaide’s housing market than elsewhere in Australia.

The patterns in the data are quite striking and emphasise the stability of Adelaide’s housing market relative to other locations in Australia. Housing prices were overvalued both before and immediately after the GFC, but wage growth coupled with gradually falling interest rates meant that home values become undervalued by early 2013.

They have stayed undervalued ever since, but the significant reductions in interest rates from 2019 have opened up the gap even further.

The pandemic brought international travel to a near halt, helping to divert funds into consumption and housing investment.

In the next figure, we show the average annual household cash savings as a percentage of the median Adelaide house price. There are several interesting trends.

For example, we can see that savings were on a downward trend for years after the GFC.

This was the main period in which Adelaide house prices became undervalued with respect to home buyers’ purchasing power (reflecting wages and interest rates). Household savings have been gradually rising since about 2016, and this accelerated during the pandemic. 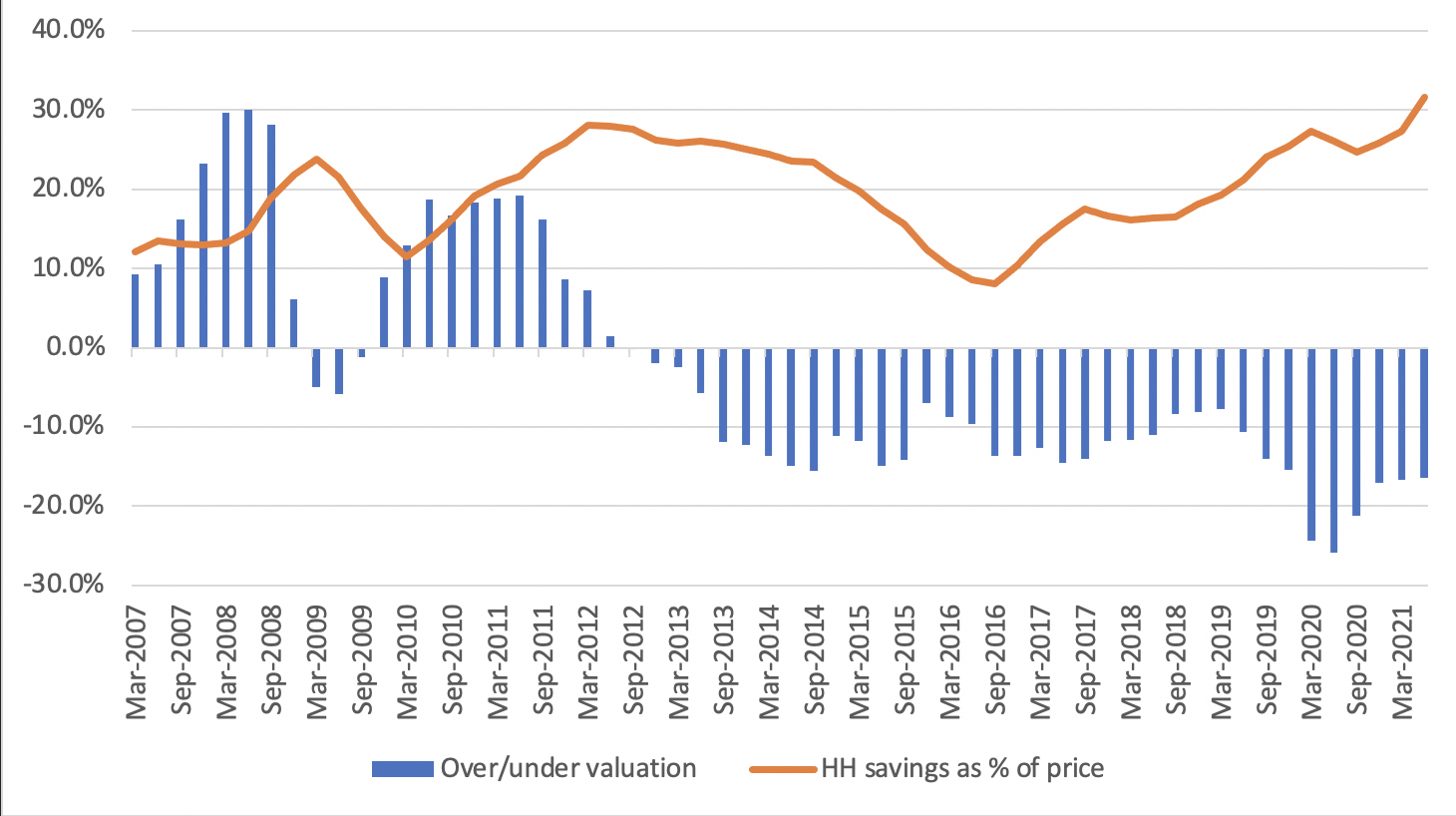 When we bring the different trends together, we can see why there is now a perfect storm in Adelaide’s housing market.

While Adelaide’s housing market has been undervalued since about 2013, the HPP index has remained quite flat during this period – until just before the onset of the pandemic.

In the second quarter of 2019, household average cash savings rose to about 20 per cent of the median Adelaide house price for five years, and it kept rising sharply through the pandemic.

It is quite clear that the HBPPI began to rise for two or three quarters before the rapid increase in house prices began, showing that this is a good leading indicator of market activity. But, the data also show that home loan serviceability alone is not enough to explain rocketing prices – an excess of household savings was also needed. 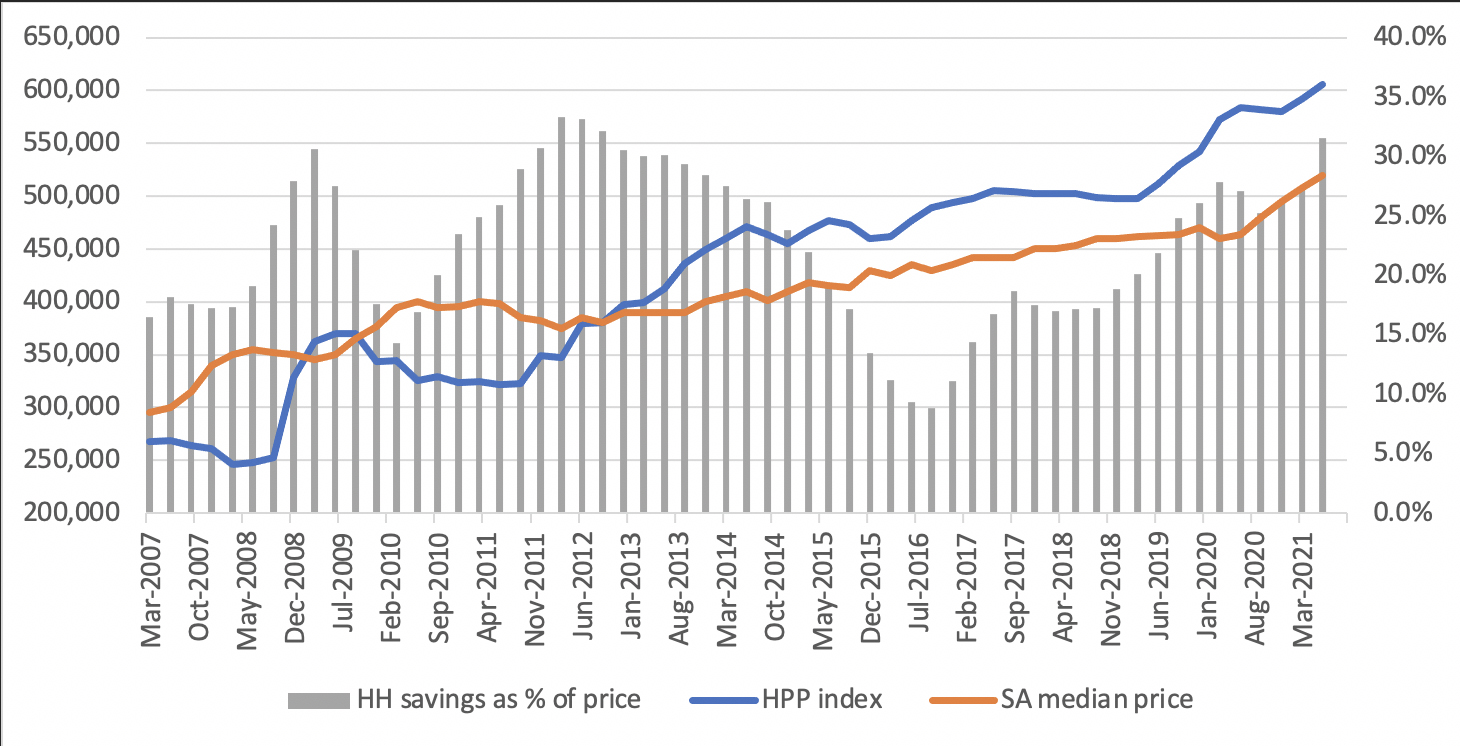 The question is: what next for Adelaide’s housing market? Although the RBA has remained firm in its publicly stated view that there will be no rise in the cash rate in the foreseeable future, it is difficult to see how Australia can plot a different path to the majority of the OECD bloc.

Many commentators are seeing two rate hikes in 2022 in the US, and potentially three in 2022.

In Australia, most banks are routinely assuming a rise of 2.5 per cent in their stress testing calculations (of course, this does not mean that such a rise is likely in the near future).

APRA has recently revised its guidance and now requires banks to assume a 3 per cent margin in their stress testing. In the next figure we explore what a series of 0.25 per cent rate hikes in 2022 and 2023 would mean for the HBPP index. 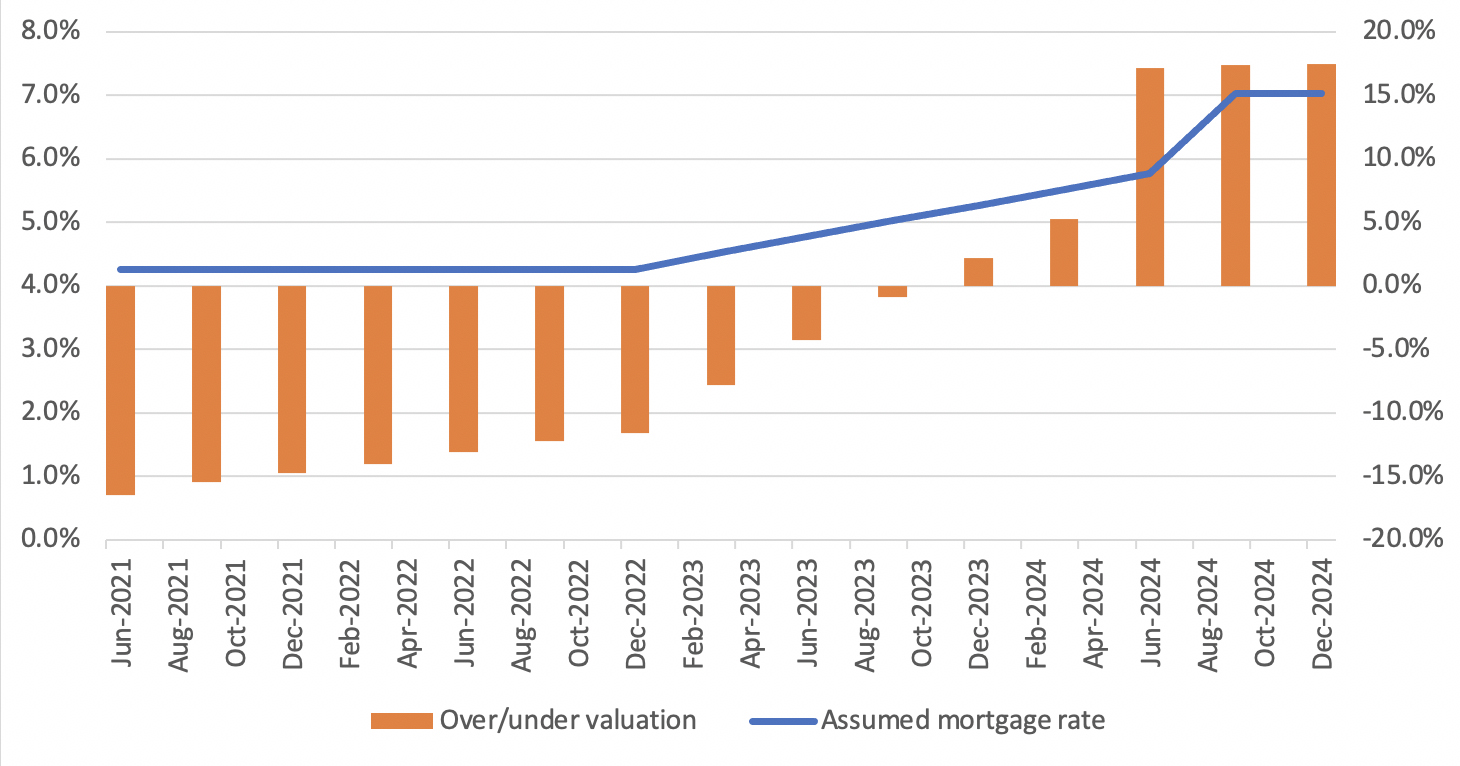 The analysis suggests that three rate hikes would be needed to bring Adelaide’s house prices back in line with the HBPP index.

Assuming no further growth in housing prices in the interim, this suggests that there will be no over-valuation of prices until late 2023.

However, this point will clearly be reached much sooner in the event of continued house price growth, and perhaps as early as late 2022.

Meanwhile, Australia’s rocketing house prices have finally now triggered signs of alarm in the banking sector with the RBA, CBA and ANZ all on record in the past few weeks as signalling the lending restraint is now needed in order to prevent further threats to financial stability.

Professor Chris Leishman and Peter Rossini work at UniSA Business, where they deliver the Property and Real Estate programs.