The UK is one of the three partners in the recently announced AUKUS alliance, whose first major initiative will be to “deliver a nuclear-powered submarine fleet to Australia”, as Prime Minister Scott Morrison trumpeted on Thursday, September 16.

Today, Swiftsure is stored afloat in the non-tidal basin at Rosyth dockyard, waiting to be dismantled by the Ministry of Defence (MOD).

The boat is not alone: it is one of 20 submarines removed from service.

An investigation by the UK’s independent National Audit Office reported in April 2019 that the Ministry of Defence “has not yet disposed of any of its 20 retired submarines, with nine of them still containing irradiated fuel”. They are stored at dockyards in Devonport (Devon) and Rosyth (Fife).

During the investigation, the MOD told the National Audit Office that although it had deferred dismantling submarines on affordability grounds in the past, this was no longer acceptable on safety and reputational grounds. It committed to fully dismantling its first submarine, Swiftsure, by 2023.

As a key AUKUS partner, the UK, a builder of nuclear submarines for more than 40 years, is struggling with the dismantling and storage of radioactive parts from its decommissioned boats.

The Department has spent an estimated £0.5 billion ($940m AUD[NM1] ) since 1980 on storing and maintaining its retired submarines.

To dispose of submarines, the Department must undertake a complex series of inter-related tasks to remove the fuel, take out radioactive parts (dismantling) and then recycle the boat. At each stage, the Department needs the necessary space, infrastructure, skills and regulatory approvals.

Since 2004, the Department has not defueled any submarines and does not have a fully funded plan to re-start the work. Nine of the Department’s 20 out-of-service submarines contain nuclear fuel which needs to be removed using nuclear-regulator approved dock infrastructure and facilities. In 2004, the Office for Nuclear Regulation found facilities in Devonport did not meet the latest regulatory standards and the Department stopped defueling submarines. 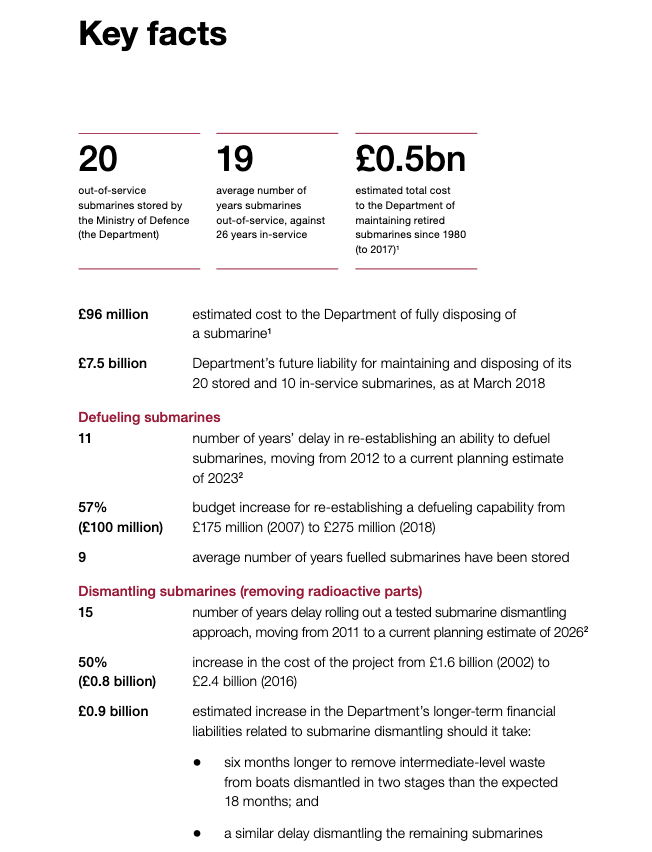 Delays to defueling have wider consequences for costs, risk and dock space. Maintaining fuelled submarines presents additional technical uncertainties and affects dock availability, particularly in Devonport which is expected to run out of space for retired submarines in the mid-2020s. Space constraints have meant the Department does not have a dock to prepare its most recently retired submarine for long-term storage and is developing other ways of doing this. Until submarines are placed in storage, they need to be kept partially crewed, potentially affecting the Department’s ability to redeploy its personnel.

The Department has started to dismantle two submarines, Swiftsure and Resolution, but does not yet have a fully-funded process to remove, transport and store all types of radioactive parts. Delays create cost, capacity and reputational risks beyond the project. Looking further ahead, the Department does not have a fully-developed plan to dispose of Vanguard and Astute submarines, which are currently in service. 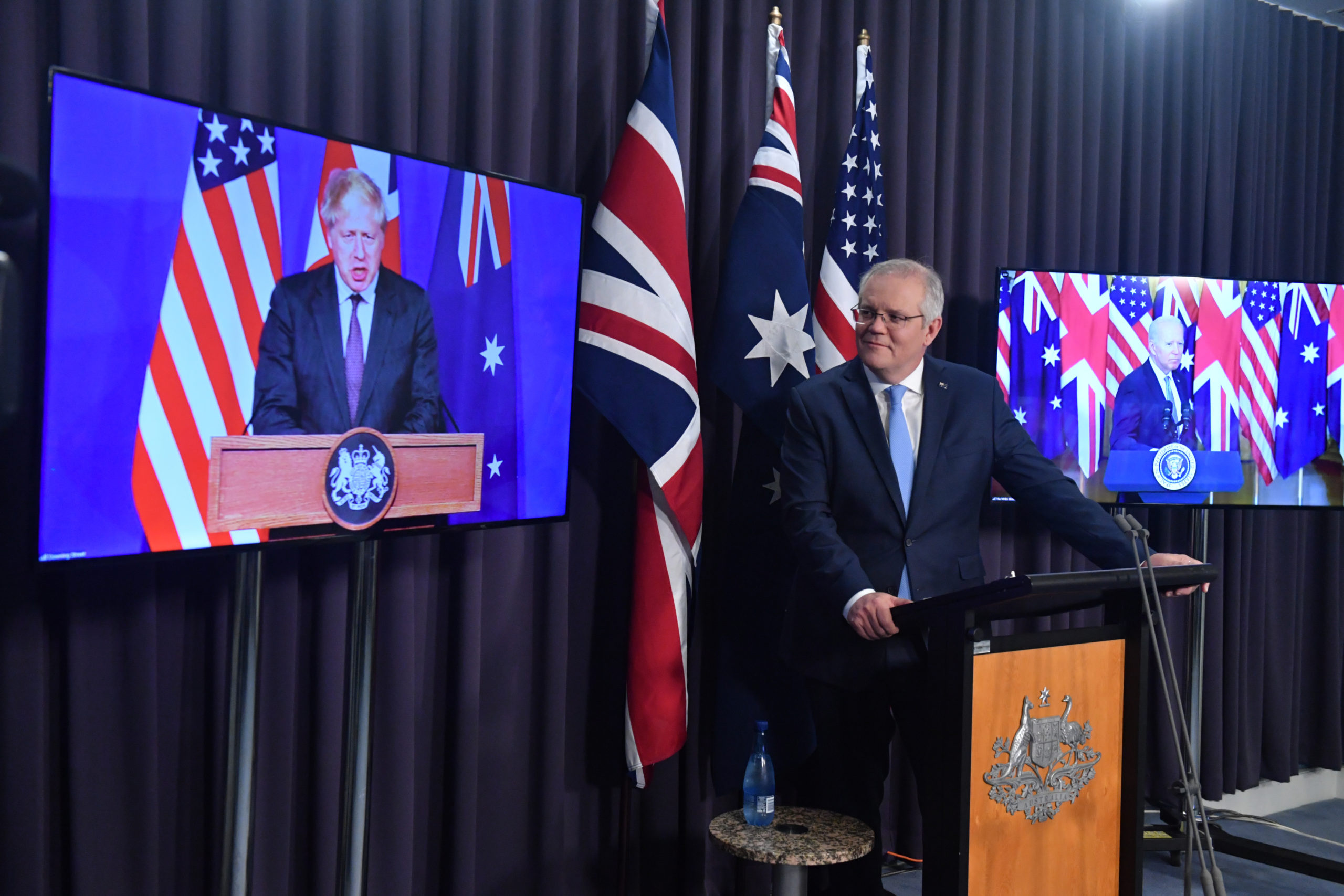 Underpinning the UK’s capacity to dismantle its nuclear submarines is an extensive civil nuclear capability with storage and disposal sites up and down the coast at Devonport, Rosyth, Cumbria, West Cumbria and Cheshire.

Australian Prime Minister Scott Morrison promises that “we are not seeking to acquire nuclear weapons, nor establish a civil nuclear capability”. Given the National Audit Office’s findings that the UK has capacity and storage problems from its current decommissioned subs that will take until at least 2060 to resolve, our alliance partner is in no position to assist.

So, what are the parts of the submarine that require dismantling and does Australia have the capability?

Retired submarines generate three levels of radioactive material, which raises challenges for how parts can be handled, transported and stored. The NAO report summarises the submarine parts as:

Australia does not have a central facility for the storage or disposal of radioactive waste, which is currently held at more than 100 locations around Australia. Past attempts to site a national waste repository, including near Woomera in South Australia and Muckaty in the Northern Territory, were unsuccessful, due to community concern and resistance from state governments.

It reported in mid-2016 and among its findings was that “South Australia has the attributes and capabilities to manage and dispose of international used nuclear fuel safely, and it would have significant intergenerational benefit to the community. Social and community consent is fundamental to this activity proceeding.”

It recommended that the state pursue a purpose-built waste storage and disposal facility for used nuclear fuel and remove potential legislative constraints to properly consider this opportunity.

A citizens’ jury was established to consider the report and came out against the proposals, prompting then-Opposition Leader Steven Marshall to withdraw his party’s bipartisan support, stating the push for a nuclear waste storage facility was “all but dead and buried”. The proposed Kimba low-level waste repository is not relevant to this discussion, which is about a large-scale industrial challenge that’s beyond the UK’s best endeavours.

So, where does that leave the Australian Government’s intention to build submarines in Adelaide?

The concerns with the UK’s problems in decommissioning submarines and the emerging lack of room at its shipyards suggest the UK Astute-class option would need the support of an Australian civil nuclear capability. By ruling that out, Scott Morrison leaves us with the US Virginia Class option.

In part two of this analysis tomorrow I will examine a recent report to the US Congress which raises problems with the capacity of the US industrial base to meet the requirements of President Joe Biden’s current “Long-Range Plan for Construction of Naval Vessels” and strategic limitations on who builds their nuclear submarines.

Kevin Naughton has had a long career as a broadcaster and journalist. He was chief-of-staff to Defence Industries Minister Martin Hamilton-Smith in the Weatherill Government.