Court martialled and executed for shooting Boer prisoners in 1902, he popped up last year as the subject of Peter FitzSimons’ latest military history blockbuster.

Now Adelaide City Council is considering a request to add his name to the 60 South Australian dead named on the South African War Memorial outside Government House.

The request comes from Cathy Morant, a distant relative of the Breaker, and James Unkles, a lawyer who for more than a decade has argued controversially that Morant should be pardoned due to flaws in the court martial process.

Their argument for adding his name is straightforward.

Morant left Adelaide with the 2nd South Australian Mounted Rifles in January 1900. His brief service with this unit was honourable, they point out rightly, and any crimes he may have committed were during his later service with the Bushveldt Carbineers. Naming him on the North Terrace memorial would recognise his service. After all, he’s already recognised at Renmark.

I think this is a very bad idea.

The Renmark Honour Roll lists 19 men from the district who served in South Africa. Comparing it with the North Terrace memorial is like comparing apples and oranges.

Something like 2000 South Australians served in this war. There was no prospect of recording the name of every man on the state memorial. The organising committee, therefore, settled for a general acknowledgement of the valour of the citizen-soldiers who had served their sovereign. The main plaques would simply list the men who had fallen.

They had died from enemy action, disease or accident.

Was Morant one of the noble dead? Not really. Shot by a firing squad after a court martial found him guilty of cold-blooded murder, charges he did not deny except to say that he was under orders, the circumstances of his death were different and less honourable.

Anyone doubting what he did should read FitzSimons’ chilling account of the execution of Roelf van Staden and his two sons, 12 and 16, and Craig Wilcox’s definitive history of Australia’s first war.

Let’s not forget, too, that South Australia’s Boer War veterans did not want him on their mates’ memorial. The last of them died in 1975. They can’t speak for themselves but the historical record leaves no doubt as to what they thought. 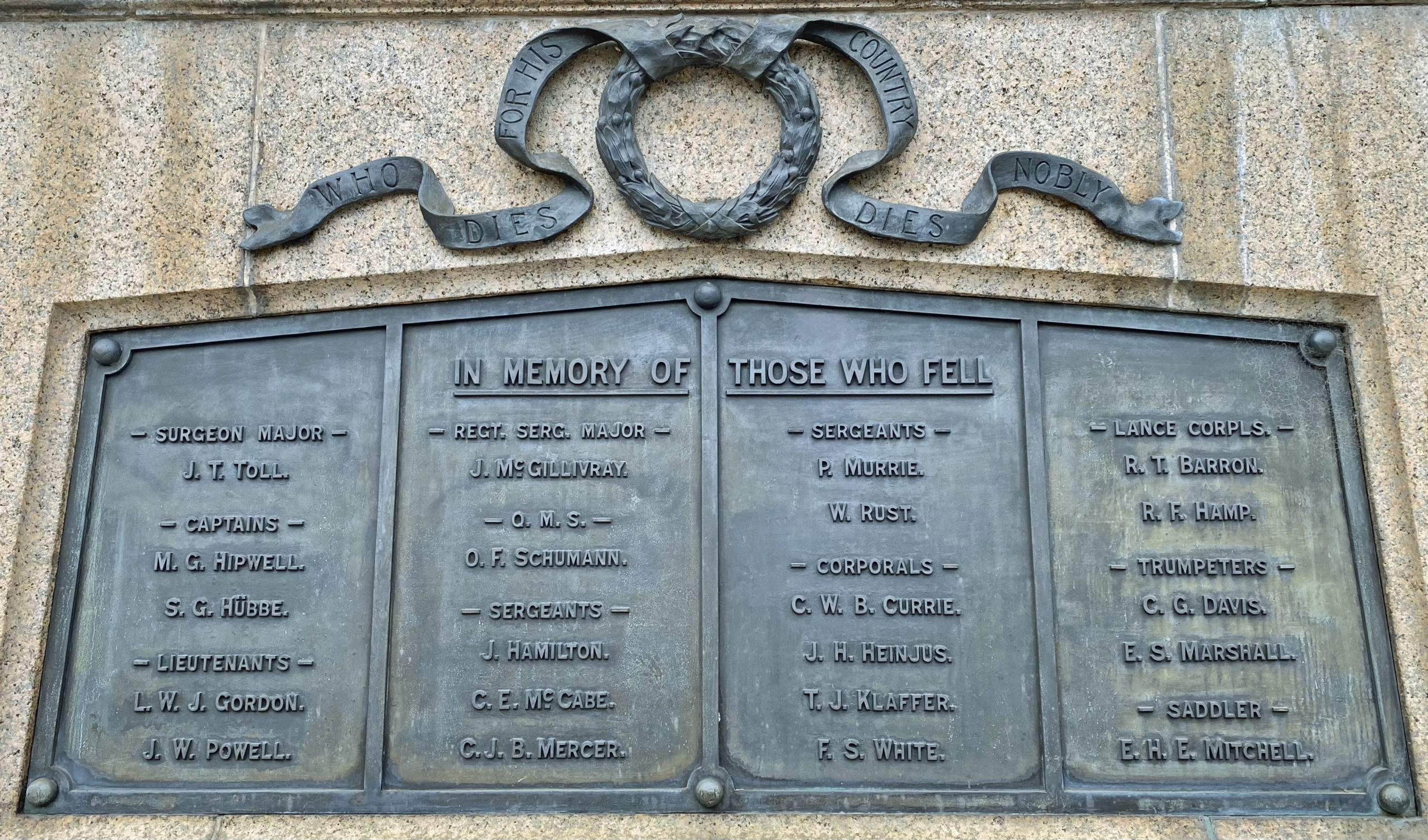 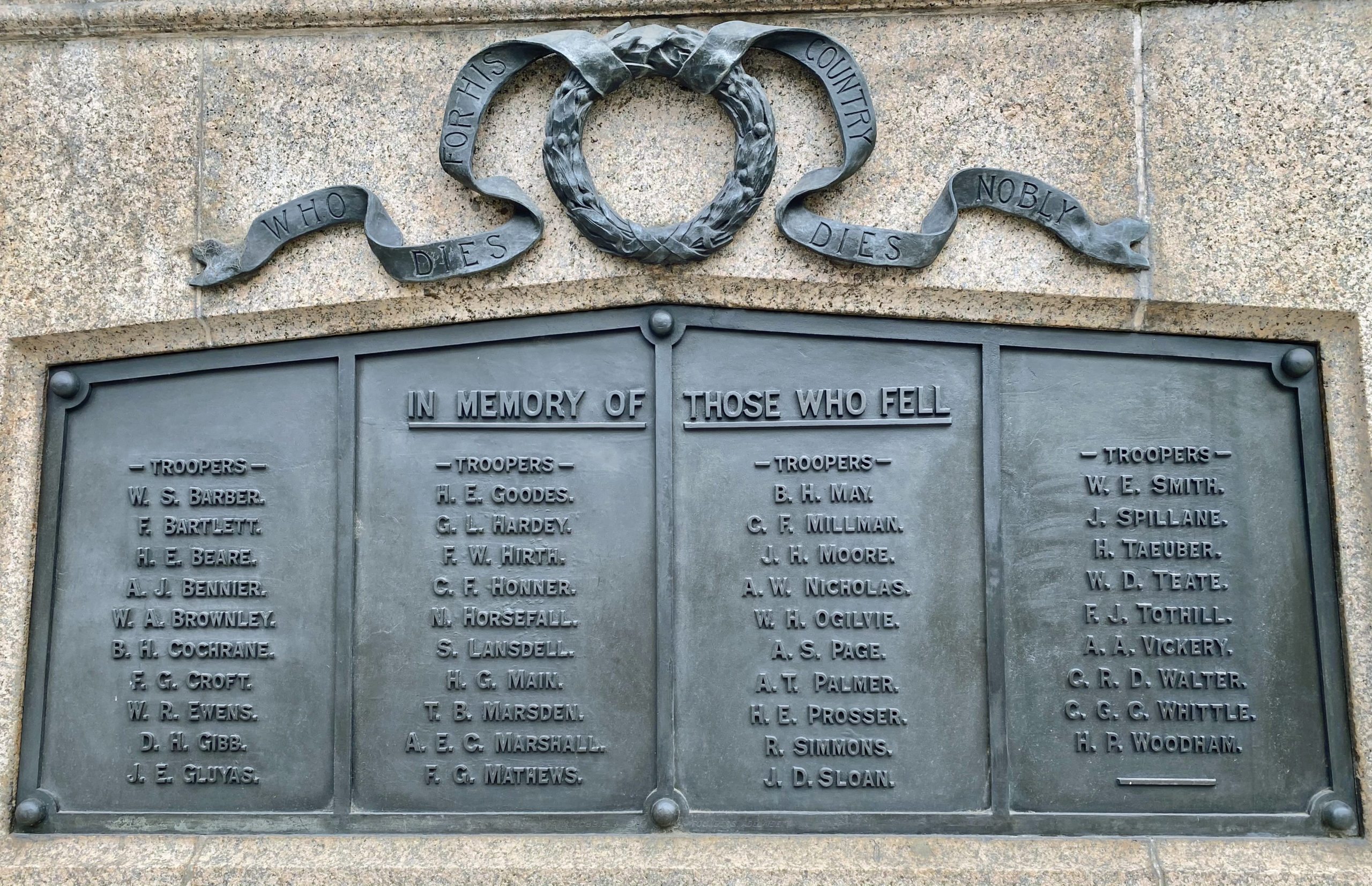 The names of Boer War soldiers on South Australia’s memorial to those who died in the conflict.

The memorial was unveiled on June 6, 1904. While sculptor Captain Adrian Jones’ vigorous “man on the horse” won universal acclaim, there were soon complaints in the press about misspelt names and seating arrangements. Questions were asked about the absence of some men’s names. Even the Governor’s speech came in for criticism.

But not one of the 120 men who had served with Morant in 2SAMR wrote in to say: “Where’s our old mate, Breaker? Why has his name been left off?”

Some years later they founded the South African War Veterans’ Association. It dissolved as late as 1972 when only five men were still living.

Tellingly, in its long history, SAWVA never lobbied to have Morant’s name added to the memorial. And it’s not as if the vets were shy of lobbying on behalf of old mates.

As late as 1925, William Ogilvie’s name was added when his father produced a letter from the Staff Office written in 1904. It apologised for his son’s name having been left off inadvertently. The letter was read to a veterans’ meeting. His claim seemed compelling.

They fought for Ogilvie and they won. A 60th name was added. But on Morant – silence. Did they fear that adding his name with dishonour the men already named?

Arguments against the proposal don’t stop there.

“The Man on the Horse”: Adelaide’s memorial to the South African war, on the corner of King William St and North Tce. Image: Bilby/Wikimedia Commons, CC BY-SA 3.0, https://commons.wikimedia.org/w/index.php?curid=4650083

At least 25 other South Australians died because of their war service in South Africa and are not among the 60 men named on the memorial.

These men did not enlist in Adelaide. Some were in South Africa when the war broke out. Others, rejected in Adelaide, were so keen to fight that they paid their own passage and enlisted there. Some fought in units raised in other Australasian colonies.

Records relating to all these men were scanty so it was thought best to restrict eligibility to men who had enlisted in South Australian units. But if the names on the memorial are to be ‘second guessed’ in our time, it is only right that the claims of these humbler men are considered, too.

Then heritage issues kick in.

In 1904 it proved difficult enough to squeeze the names of 59 men onto the plaques affixed to the pedestal on which the horse and rider sat. These massive bronze plaques are recessed into the Murray Bridge granite mass.

They can’t accommodate more names and there is no room for more plaques, even if they could be added without disfiguring a heritage icon which has watched over the city’s busiest intersection for 117 years. The North Terrace memorial’s heritage value is as it stands.

And let there be no doubt: Morant’s name does not appear on the honour roll at the Australian War Memorial.

In 1981, not long after the release of Bruce Beresford’s wonderful film, the AWM’s board resolved that Morant would “need to be cleared of the murder charges before his name could be included”.

Morant’s courage and swagger are not in question. He was an extraordinary man.

I wonder though what the many women and children who contributed as little as sixpence to the public appeal – not a penny of government funds went into the memorial – would think about a later generation adding his name.

For in the last resort, as the AWM website says, “he was guilty of a war crime”.

Dr Tony Stimson is president of the South Australian Boer War Association. He is the co-author, with Jennifer Humphries, of a forthcoming book, Citizen Soldiers: South Australians at the Anglo-Boer War 1899-1902, to be published by Wakefield Press.