It was considered – unfairly perhaps – one of the defining moments of a campaign that saw the subject of Marshall’s accidental enthusiasm narrowly and unexpectedly handed a four-year epilogue to its governmental tenure.

Marshall, of course, eventually became Premier, and is now more likely than not to be re-elected for another term, thanks largely to South Australia’s management of the COVID pandemic, aborted lockdowns and inflammatory rhetoric about alleged liars aside.

The year started with an inferno and has basically gone downhill from there, but it’s been a particular pisser for the Labor Opposition.

The Marshall Government had spent its second year in office flailing about the place in search of an agenda, losing months in an aimless fight with its own base on land tax that forced it to turn a budget revenue-raiser into a net spend.

Then Marshall’s deft handling of the bushfire crisis – as distinct, certainly, from his federal leader’s less statesmanlike turn – was superseded by his less deft handling of an emerging scandal about one of his backbenchers misbehaving at a parliament house Christmas party.

On March 12, Labor leader Peter Malinauskas gave a speech that was meant to set the platform on which Labor’s return to government could be built.

Reiterating his mantra that the ALP is “first and foremost an economic party”, he outlined “three overarching themes” that would underpin the party’s policy direction: “Jobs for today; Education for tomorrow; and Environment, because it’s forever.”

Sure, maybe not that catchy. That “because it’s” bit doesn’t exactly roll off the tongue, and Labor hasn’t exactly been out setting the bar on environmental policy in SA.

But a succinct statement of values and priorities nonetheless.

Unfortunately for Malinauskas, that speech was delivered at a CEDA (Committee for Economic Development of Australia) function just as COVID madness was hitting the nation. A day later, the Melbourne Grand Prix was immediately axed, even as punters lined up to enter. The speech itself garnered little publicity and less interest, and Malinauskas’s three overarching themes haven’t been mentioned since.

As an Opposition Leader he’s taken an admirable – if admirably strategic – tack during the ensuing months, avoiding the divisive carping of the Victorian Liberal Opposition in favour of emphasising bipartisanship and solidarity.

That’s interspersed, of course, with the odd call for someone to resign if and when other non-COVID issues crop up, as they did this week when the state’s child protection regime once again came under an unwanted spotlight.

All of which has effectively halted any momentum Labor might have gained through 2019, while denying the chance to showcase their own credentials for government.

Mind you, COVID has provided the Opposition one moment of pure political respite.

Because of the recent Parafield cluster, hardly anyone gave a second thought to the fact Labor was having a cluster situation of its own, of one form or other.

Back in August, Labor MP for Light Tony Piccolo made a big song and dance about quitting the frontbench to selflessly seek preselection in the northern seat of Schubert, with a draft redistribution shifting his Gawler hub into the neighbouring electorate, in the process transforming it from an uber-safe Liberal seat to a moderately vulnerable one.

Given Piccolo’s campaigning prowess and local profile, he was somehow convinced to take one for the team – and he spent the ensuing months taking up the fight for the poor neglected burghers of the Barossa.

That was, until the final boundaries commission report dropped last month… to reveal Gawler was staying put in Light and that Schubert’s Liberal margin was now even safer than it was in the first place.

In the midst of the cluster drama, Piccolo quietly confirmed he’d had a bit of a rethink and that actually he’d rather leave the Barossa burghers to their own devices and retreat back to his nice safe Labor seat, thanks very much.

Which unfortunately meant resigning as a preselected candidate.

But not before he’d spent several weeks doggedly campaigning and leafleting in Schubert, explaining to all and sundry that he was Labor’s candidate for the area and that they’d been taken for granted but now Labor was there to take them seriously, but only so long as they might be able to win a seat out of it.

Sadly for him, he wasn’t offered his frontbench gig back.

The sorry episode also wrongfooted an even more significant preselection, with longtime federal MP Nick Champion understood to have been lined up to replace Piccolo in Light. He’s now more likely to contest the vacant Florey, but will be sweating on a decision by incumbent crossbencher Frances Bedford about whether she’ll recontest the seat or shift to neighbouring Newland.

It’s worth noting all this because, through successive Liberal losses during Labor’s period of early-millennial electoral dominance, the ALP rather deftly managed to cement the notion that they’re exceptionally canny operators.

True enough, the Libs didn’t do themselves many favours either: there was, for instance, that 2006 election when they were so cash-strapped they could only afford one TV commercial that ran in the last week of the campaign – and still managed to misspell ‘Labo(u)r’.

Or their campaign costings shambles released on the eve of the 2010 election. Or indeed, Marshall’s 2014 exhortation to vote Labor.

So Labor can count themselves lucky that a statewide lockdown overshadowed Piccolo’s pickle – because if that had been the Liberals in Opposition, they would have been mercilessly ridiculed. And rightly so.

Because it’s about a bad a blunder as I can recall in SA electioneering. 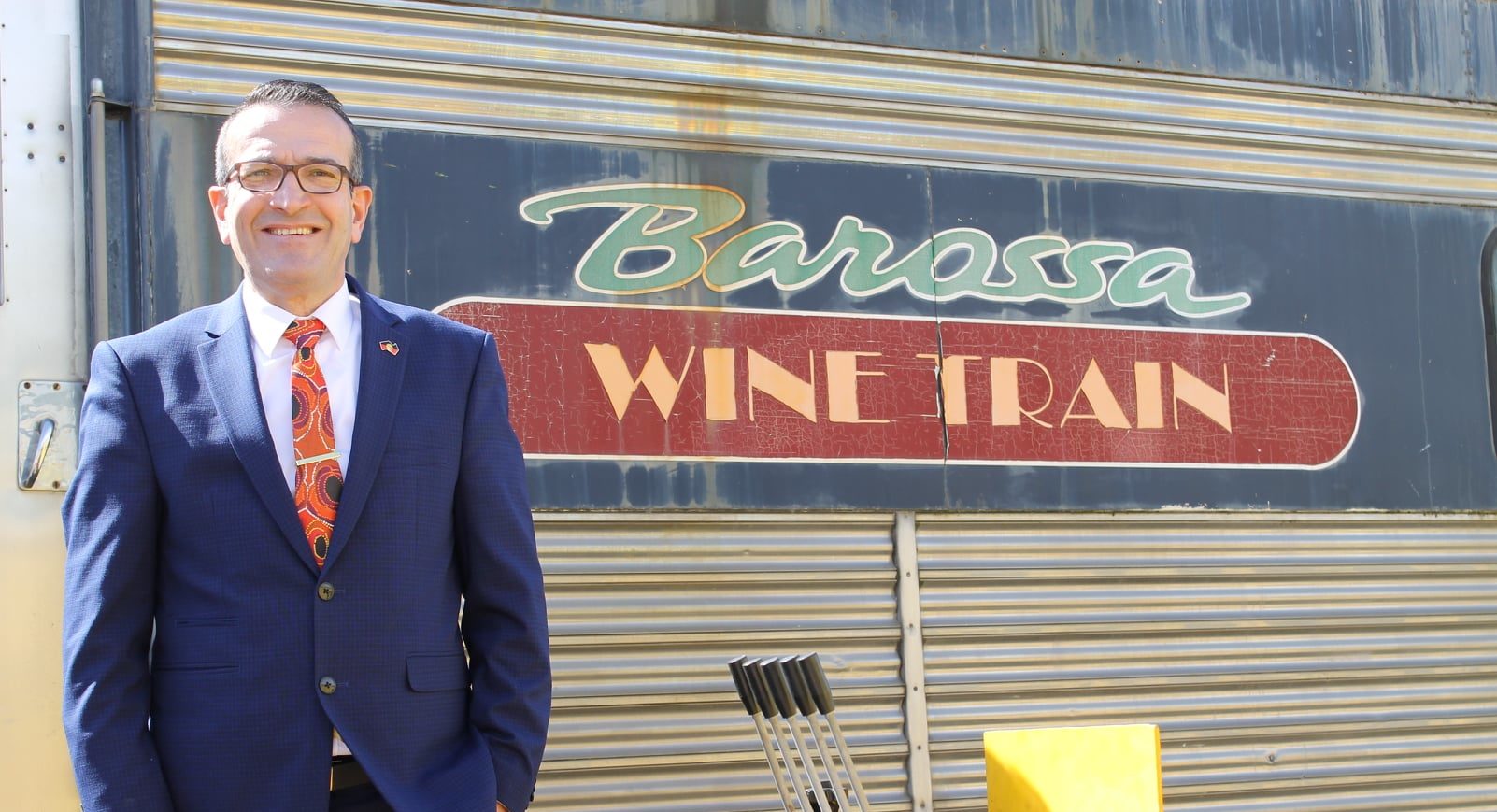 Tony Piccolo poses with the shuttered Barossa Wine Train – a cause close to the heart of voters in Schubert, which he is no longer contesting. Photo: Facebook

But while Labor chases its own tail, Marshall is getting on with not merely administering the state in the midst of a global pandemic but remodelling the Liberal Party itself.

As it happens, Piccolo’s intended target in Schubert was former frontbencher – and Duluk’s fellow conservative – Stephan Knoll, who has since pulled the pin himself.

Which, given this year’s split in conservative Liberal ranks, would effectively mean that the Right will have been all-but completely exorcised as a force in the Liberal Party-room.

The significance of this goes beyond mere factional politics.

Malinauskas may argue Labor is “first and foremost an economic party”, but it’s on social debates in parliament that the starkest divides are apparent.

Marshall’s fellow moderates have lately led the progressive side of the debate of numerous issues, including abortion reform and sex work decriminalisation, on which Marshall voted in favour and Malinauskas against.

At a recent media function, Marshall was effusive about the various outlets’ relatively responsible coverage of the COVID-19 pandemic this year, but he also made another point – thanking them for the sensitivity of their coverage of the midyear Black Lives Matter protests, while noting that the marches weren’t given the same treatment in other jurisdictions.

Even on matters economic, there isn’t now – if ever there was – a vast gulf between the parties. The biggest policy difference is on privatisation, with Labor arguing the Liberals went to the election promising not to privatise things but then did anyway.

With voters heading back to the polls in March 2022, Labor will be hoping 2021 is a very different year to the one just gone.

Because Steven Marshall probably won’t be accidentally telling people to vote for a Labor Government at the next election – but it’s arguable he’s accidentally already leading one.