There are witches in the hills, calling my name

Come dance in the moonbeams, ride the night wind

Make love to the darkness and laugh at man’s sins

For as long as there have been hills and people, tales have been told of witches and other beings living in the crags and crannies high above us.

Whether witches habitually dance in moonbeams is debatable, but it’s a fair bet they know our names, and with them, our failings. It is an absolute certainty that witches ride the night wind.

At least the witches of Milendella do. For them, nothing surpasses the unbridled joy of boarding a broomstick for a bracing night-time jaunt.

Milendella is one of the many tiny settlements peppered throughout the Eastern Mt Lofty ranges, as they lope past the Barossa Valley on their way to the state’s mid-north.

Adelaideans spending a weekend water skiing at Walker Flat might just recognise the name from flashing by the turn-off. At that point, I expect, they would think to themselves, “we’re almost there”.

Milendella has always a place more driven past than driven to. And it is quieter now than at any other moment during the region’s European history. The agricultural economy has inexorably shifted gears to keep pace with the world – much bigger farms, with far fewer families working them. There’s been a great emptying of the countryside.

Bearing surnames like Horstmann, Loechel, and Rochow, most of those farming families that came to Milendella were part of the German diaspora of the 1840s. They helped write the first chapter in Australia’s refugee story, using themes still current today – an escape from lives ruled by poverty and persecution, an arrival in hope.

They built their homes and churches, worked the land, raised families, and told their stories. 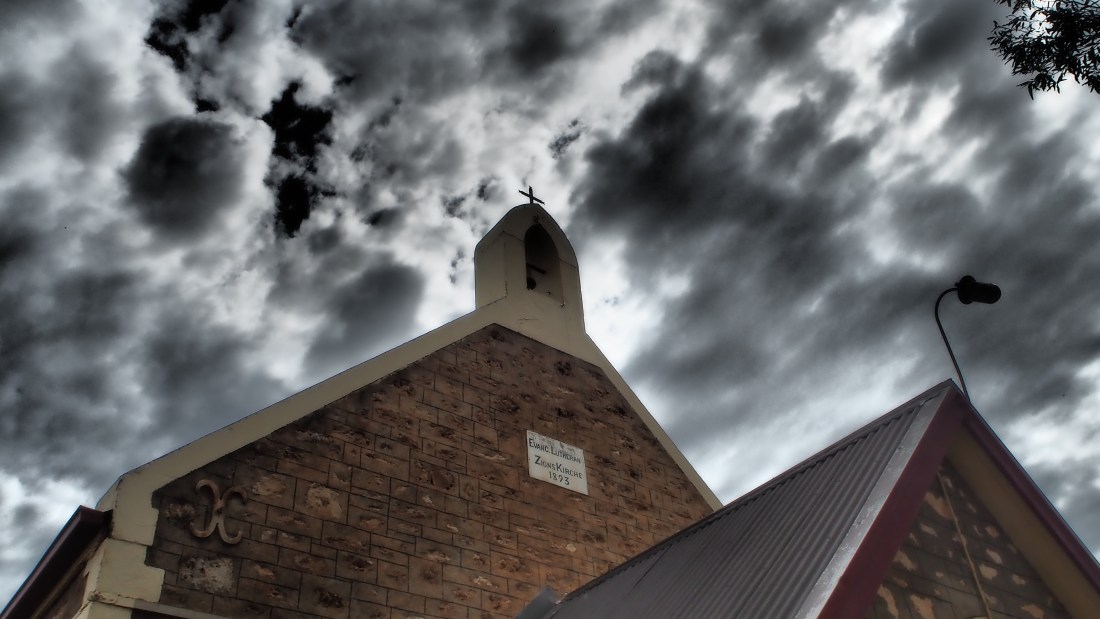 The witches live in a wild outcrop covered in yakka bushes. The tumble of grey, green rocks streaked with slashes of orange, sit like a fortress above a valley formed as the hills tumble down towards the Murray plains. The base of the valley was a natural place to cut a road. It clings tight to the witches’ home, following the curves of the hills.

The story, too, clings tight to a well worn form. On dark and stormy nights, the witches would wait for travellers to trot unsuspectingly by. Then they would swoop down from their eyrie, frightening the traveller and their poor horse.

That, though, was just the start of the evening’s revelries. A few kilometres away from the outcrop as the crow flies, or in this case, the crone, is a little Lutheran church.

After a successful night of scaring the bejeezus out of mortals, the witches would leave their rocky home and scoot around the church steeple in a giddy victory lap, or two.

Even to the most novice of broom jockeys the flyby can’t have been much of a challenge. Unlike the substantial buildings of the wealthier Barossa, Milendella’s church was hewn from a less prosperous land. Rather than soaring proudly, this church steeple merely peeks meekly above the roofline. It’s as though Milendella’s faithful were more mindful than their Barossa brethren of who gets to inherit the earth – that, and they were poorer.

Still, in this harsh but lovely country, both the natural and the supernatural residents know that you make your living, and take your pleasures, as you can. The steeple served its purpose well if not grandly.

My mother heard about the witches in the early 1960s when she visited Milendella with the school dental service, peering into the mouths of the town’s primary school kids.

Reg Butler, in his history of the region, The Quiet Waters By, also wrote about the witches being a piece of local folklore, albeit not one of German origin..

The witches had been watching carefully from the hills, laughing at man’s sins, long before Europeans on horseback ambled along. 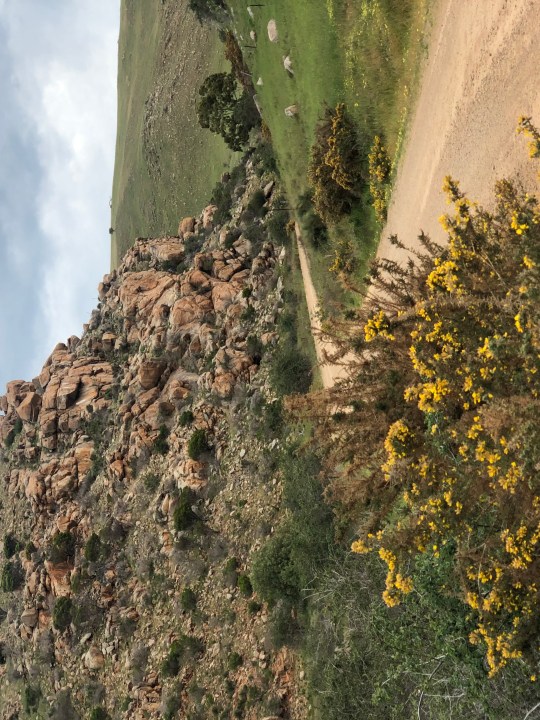 It was the original inhabitants – the Peramangk people – who first told the newcomers about them, though the tale has shape shifted in the re-telling. When Ivan Copley’s ancestors spoke of the story, the crags and crannies weren’t home to broom-riding witches of the European tradition.

“When they say, there are spirits there, don’t go up there, what they are describing is this is a special place, only senior elders can go there. They are going to the same place for thousands of years, meeting, to talk of the law passed on by the ancestors. That’s the key to it. So maybe women are not allowed to go, maybe young people are not allowed to go there, only senior elders.

“When you start talking about high, rocky outcrops the first thing that’s got to come into mind, for an Aboriginal person… is the first thing you do is call upon the ancestors to come and join in.”

The name itself, Milendella, points to the significant of the place. The meaning is buried in English but obvious to Ivan Copley.

“Illa means place. That’s common across Kaurna and Peramangk… you know, Yankalilla, Cowandilla and so on. So when they named the nearby creek, Milendella creek, that would have come from the original wording saying, that’s a spiritual place… it’s a hack from that.”

The how, why, and when the Peramangk shared the story with the Germans is not, as far as I can tell, known. Perhaps those details are locked away in someone’s old farm diary, recorded in the graceful, looping cursive handwriting of the day. The spirits would have answered to their own particular name, not just the generic title, ‘spirits’. Maybe that, too, is in the diary. For the moment though the name is lost, including to the descendants of the people who once called it out.

To rediscover all that, I think, would be quite something. But one of the most important things we already know: the beautiful act itself of two vastly different cultures sharing a story.

Acknowledging the massacres and dispossession of Aboriginal people from their land, along with their history of resistance, has been one of the great changes to our understanding of the past. It ended a great silence that settled upon this aspect of Australian history for much of the 19th and 20th centuries. But between the rocky peaks of a whitewash on one hand, and a one-dimensional view of unrelenting conflict on the other, there’s a middle ground – one inhabited by nuance.

We might have forgotten the Milendella spirits’ names, but they haven’t forgotten ours.

The tale of the witches was appropriated by the newcomers – strangers in a strange land – trying to make sense of the place. But it was also given to them by the original owners – the people who loved and respected that place first.

For Adelaide University historian and archeologist, Skye Krichauff, those sorts of exchanges from the colony’s earliest days deserve a much wider audience.

“In a way by sharing the story, it’s an act of generosity,” Krichauff argues.

“All along there are these amazing stories of interaction and accommodation which we don’t hear in a lot of history books about South Australia.

“I think it is really important to hear these stories of interaction because it’s from them that we learn how things could have been different, how things did not have to go the way they did.”

Like the best of stories, this one casts a spell. I see the witches – their hats cocked at insouciant angles – setting off with the wind in their faces, not giving a flying fig about what anyone else thought of them. That’s quite an admirable quality.

That the witches’ delight was bought at the expense of scaring the britches off someone else is, perhaps, a little less admirable. Then again, the settlers no doubt would have well understood this particular character flaw.

They’d seen it, and forgiven it, in themselves – schadenfreude. We might have forgotten the Milendella spirits’ names, but they haven’t forgotten ours.

Along with the witches, they are calling them. They aren’t only inviting us to dance in the moonbeams, nor are they just laughing at our (many) sins. They are, in fact, telling us the story of ourselves – whispering how we came to be who we are in this land.

Simon Royal is a journalist with the ABC in Adelaide.