Of South Australia’s many curios, the O-Bahn bus transit system is one of the more interesting.

The Daimler-Benz-conceived bus corridor was considered pioneering when it was installed in the 1980s, but while it does what it’s supposed to, it never really caught on elsewhere – so it remains an idiosyncratic outlier in Adelaide’s public transport network. A significant piece of infrastructure design forever limited to ferrying passengers to and from the north-eastern suburbs.

Like all SA curios, we occasionally get little reminders of its idiosyncrasy – usually, when unfortunate drivers (usually from somewhere other than Adelaide) take a wrong turn and end up driving the wrong way down the elevated concrete track.

The thing about that is, once you’re on it, it’s nigh on impossible to turn round again, at least not without doing yourself some damage.

And eventually, it dawns on you that to keep going means you’re headed for an unfortunate crash.

So these unfortunate motorists tend to just stop dead in their tracks, and sit there feeling embarrassed until help arrives. Or to rather gracelessly try and reverse back the way they came.

Aptly enough, that’s pretty much what Stephan Knoll did this week on his own bus plan. 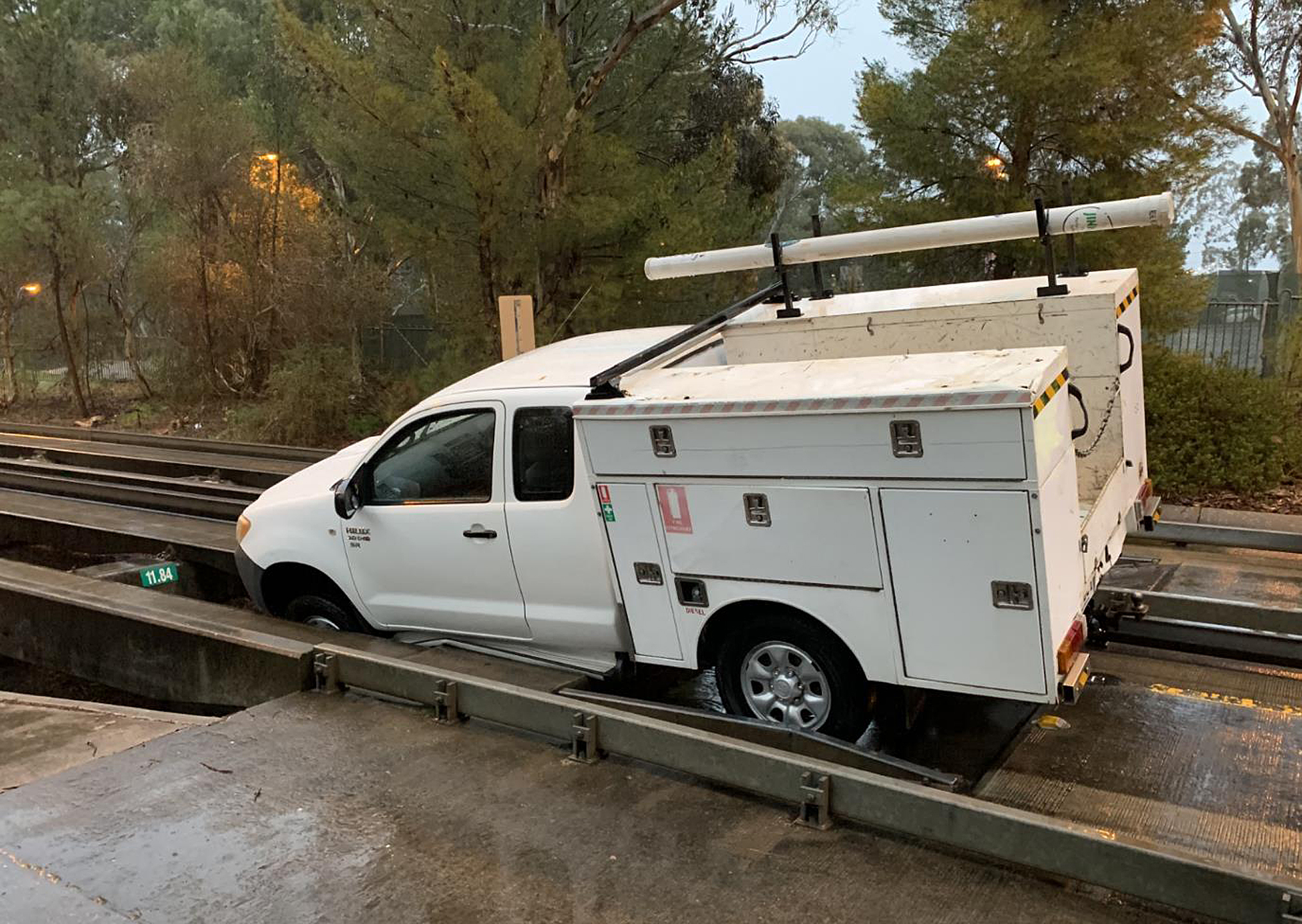 Having announced – in 2018, mind you – that the Government intended to save $45 million by cutting underused stops and routes, the minister then unveiled almost two years of departmental planning to unsurprising widespread antipathy.

And then promptly killed the whole thing off.

The Great Bus Stop Stopper, touted as generational reform only days earlier, was demised, passed on, no more, expired and gone to meet its maker. This was a late bus plan.

And so too, as an odd little footnote, was the plan to shutter three Service SA centres in Mitcham, Modbury and Prospect – a plan that Knoll had spent almost two years defending, even after Treasurer Rob Lucas (the guy who first announced it) publicly gave him free rein to abandon it.

In some ways, you have to give the Government credit for trying to forge ahead with such proposals to save such relatively small amounts of cash while annoying such a high number of voters.

And voters in key seats too.

Don’t get me wrong – it’s laudable that Knoll would have crafted this cost-saving gambit with no apparent consideration to electoral impact whatsoever.

Indeed, given that the three Service SA centres would have attracted clients from recently-won marginals such as King, Newland and Elder – not to mention Waite and the ever-vulnerable Adelaide – the plan had all the hallmarks of being authored by someone hellbent on not winning an election.

Then, of course, came yesterday’s back down on the mooted closure of Springbank Secondary College.

Again, it was billed as a victory for “people power”, after a Government-initiated review to “consider the best interests of current and future students living in the Springbank Secondary College zone and their education, particularly exploring the impact of closing the campus and merging the zone into Unley High School”.

Now, those last seven words are particularly relevant – there was plenty of media focus on the Springbank school community’s heartache, on parents’ dogged grassroots campaign and on the negative feedback to the proposal, most notably from Commissioner for Children and Young People Helen Connolly.

But whether or not local MP Carolyn Power was glad to avoid the inevitable fallout if the school got the chop, her social media yesterday made it pretty clear which outcome she figured was of broader appeal to her constituents. 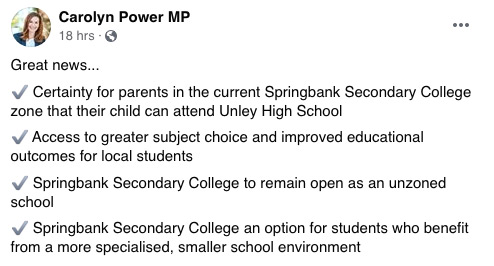 So while the media happily reported the triumph of the Little School That Could, it’s the catchment boundary of the Big School up the road that the local member is spruiking most loudly.

Carolyn Power (née Habib), who is the Marshall Government’s Assistant Minister for Domestic and Family Violence Prevention, was previously famous for whether or not you could trust her, and the veiled dog whistle implicit in that question via the manner Labor asked it on an infamous campaign leaflet back in 2014.

Now, apparently, she’s the most influential member of the government.

The Mitcham Service SA centre isn’t in her electorate (the lucky MP is Sam Duluk, who presented a petition against the closure to parliament back in 2018), but it would certainly serve her constituents.

She was also, according to several sources, one of the marginal seat discontents who railed against the bus route changes when Knoll brought them to the Liberal party-room.

Others included the recently-elected members for Colton and King, Matt Cowdrey and Paula Luethen, both moderate Liberals not known for rocking the boat. Conservative-leaning Steve Murray and Dan Cregan also made their opposition to the proposals known to their electors, as did accidental crossbencher Sam Duluk.

So while Knoll’s quickfire reverse was certainly a response to a broad public backlash, it was also a bid to avert a bloody rebellion from the backbenches.

One could almost conclude from this that the oft-neglected backbench is actually running the whole show!

And either Power is a hell of an advocate, or the Government’s a tad worried about retaining Elder… 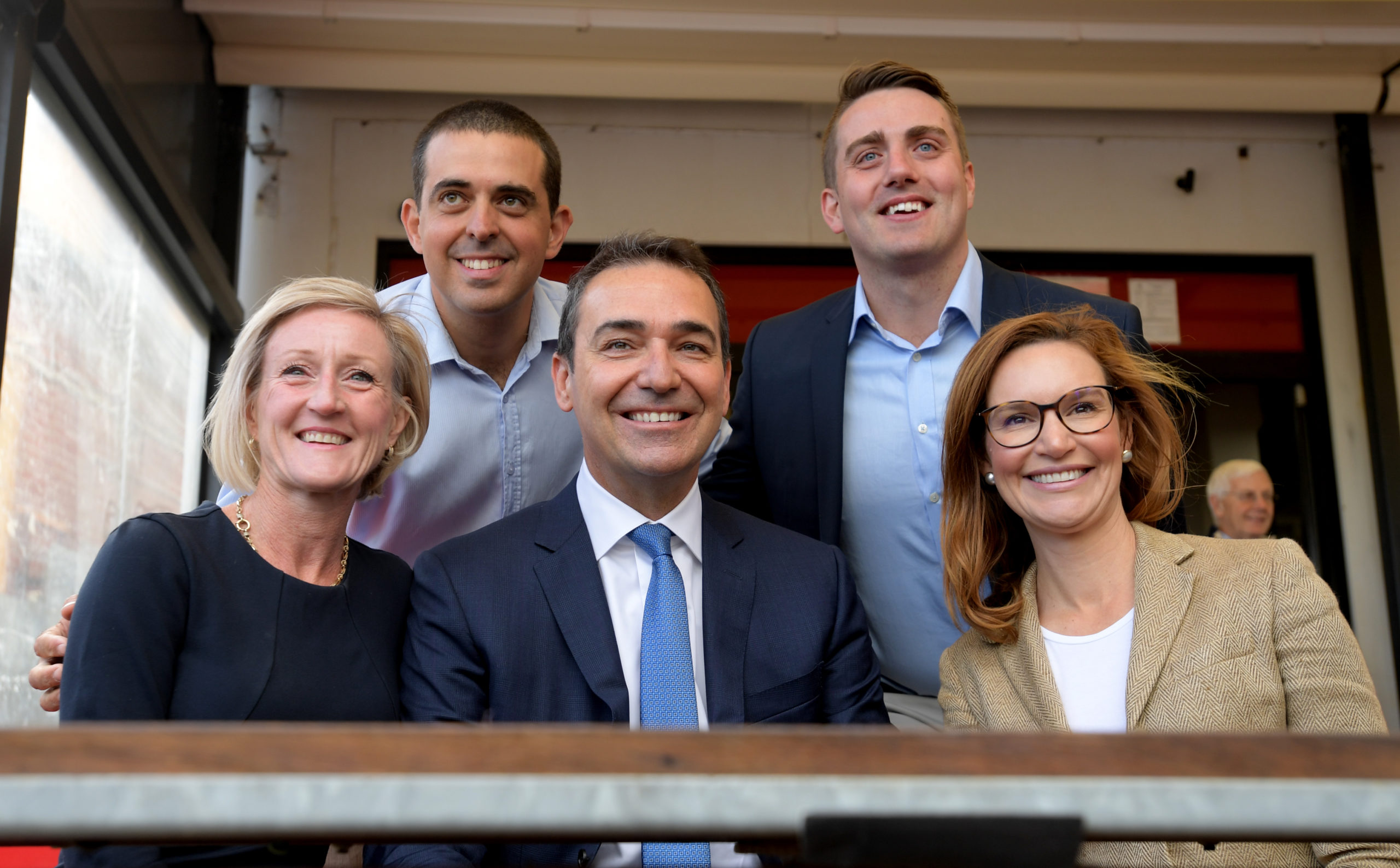 Steven Marshall with the most influential members of his Government. Photo: Tracey Nearmy / AAP

What’s notable is how starkly different this week’s responses are to last year’s land tax saga, in which Treasurer Rob Lucas painstakingly remodelled his entire savings scheme – all while stubbornly refusing to abandon his announced aggregation changes – despite similar vocal party-room opposition.

Well, one pretty fundamental thing for starters: the coronavirus pandemic has not only changed the very way we live, but it’s plunged Lucas’s already-tenuous budget into chaos.

Let’s be clear: the state economy was dire well before the lockdown took hold, and the surplus would have been more than wiped out by unrelated GST writedowns.

But in the post-COVID world, when we’ve already had successive multi-billion dollar deficits flagged, the previous impetus to eke out budget savings has largely dissipated.

It’s probably quite liberating, in a way – the whole thing’s a dog’s breakfast anyway, so why bother bearing political pain for unpopular decisions just to save a few million bucks?

The other interesting thing about all this is the way it’s been received: I’ve seen commenters on media posts admonishing reporters for describing the various decisions as “backflips”, given its negative connotation – even though it’s widely used to describe a change of government policy or direction.

We’ve run several responses from readers praising the Government for listening and acting.

Which is all fine.

But it’s hardly conducive to good government is it?

These are not mere thought bubbles spewed forth into the public ether to gauge the prevailing breeze. Well-paid bureaucrats in departments have spent much of this term of government putting these policies in place, only for them to be abandoned after as little as two weeks of dissent.

You’ll recall the Government went to the 2018 election spruiking its Strong Plan For Real Change.

If you had any doubt it remains on a political footing, even through the current health crisis, note the terminology remains in place: only of late it’s been a Strong Plan for Minimal Change in a Time of Broader Turmoil.

The SA Govt was elected two years ago today with a ‘strong plan for real change’. Circumstances have changed that pitch pic.twitter.com/O9sL4YodA1

As of this week, though, it’s clear that the Government has a new Strong Plan – one for No Change Whatsoever.

Whether this is just a strategic reset or the Realpolitik of the COVID era has dawned on Marshall and his ministry, it’s a tacit admission that now, apparently, is not the time for reform.

Which, for a Government elected with a Strong Plan to do just that, is quite some admission.