Rob Lucas isn’t in the habit of quoting former Labor luminaries, but Keating’s analogy would be an apt one to sum up recent events in SA politics – and what has almost certainly been the weirdest policy process I have ever seen.

Almost six months on from the state budget, the Government’s centrepiece “historic land tax reform”, as Lucas trumpeted it today, has finally been passed…

Except that this was never a centrepiece reform.

In fact, it wasn’t even really meant to be much of a reform at all.

This whole land tax debacle, lest we forget, started out as a minor aside in the budget papers, a nifty accounting squeeze to claw back $40 million a year from a bunch of people who, as Lucas said on the day, “are not paying their fair share of land tax”, and for whom “there will be very little sympathy in the community”.

That may have been so, but the wounded constituency managed quite a good line in acute self-pity, significantly amplified through a vigorous social media campaign, even if their rallying cry – “It’s ok to drink Penfolds” – does tend to reinforce the Treasurer’s initial prediction.

In the event, of course, they found a sympathetic ear in the Labor ranks, even if that was a case of the Opposition betting on a horse called Self-interest – as Keating also used to say.

But the sprawling Frankenstein’s monster of a land tax package that finally passed the Upper House by a single vote last night had at least one neat bit of symmetry about it.

As one bewildered observer put it this week: “Turning a revenue measure into a high end tax cut at a structural cost to the budget is some effort.”

The aggregation changes were meant to claw back some of the $150 million the Government had already effectively given away under the long-promised land tax changes it had already legislated last year. Instead, the entire package will now cost it $190 million.

A Liberal Government introducing tax changes that were initially derided by the top end of town, but celebrated by the Greens, the Australia Institute and social service groups, for instance.

A Liberal Government arguing the merits of its reform on fairness grounds, while the Labor Opposition breaks bread with the landed gentry citing economic imperatives.

Then, having spent months arguing for his $40 million windfall, Lucas’s minor concession that Treasury had got its revenue estimates wrong – by a piffling $80 million. (Whoops!)

And then turning this monumental disaster into a glorious moment of serendipity by remodelling his budget grab into a substantial top rate tax cut.

Next came the long-promised broad consultation, with Lucas amassing around 200 strongly-worded submissions, and largely ignoring them all with his subsequent legislation. Which he then amended after a couple of weekend coffee dates with a former staffer who helms the Property Council.

Speaking of which, we saw the Property Council go from being the Government’s most ardent fanboys to its most strident critics – and then back to fanboying all over again after that eleventh hour deal.

And we saw John Darley go from demanding the Government bring on a vote so he could kill its festering turd of a Bill, to the Advance SA MLC waving the legislation through after yet more revisions, insisting that “on balance, these changes will be better not only for the majority of individual land taxpayers… but also for the state’s economy overall”.

And after all that, Lucas will be feeling vindicated – smug, even – that whatever else he gave away, he managed to doggedly cling to his aggregation crackdown, like Gollum clutching his Precious. 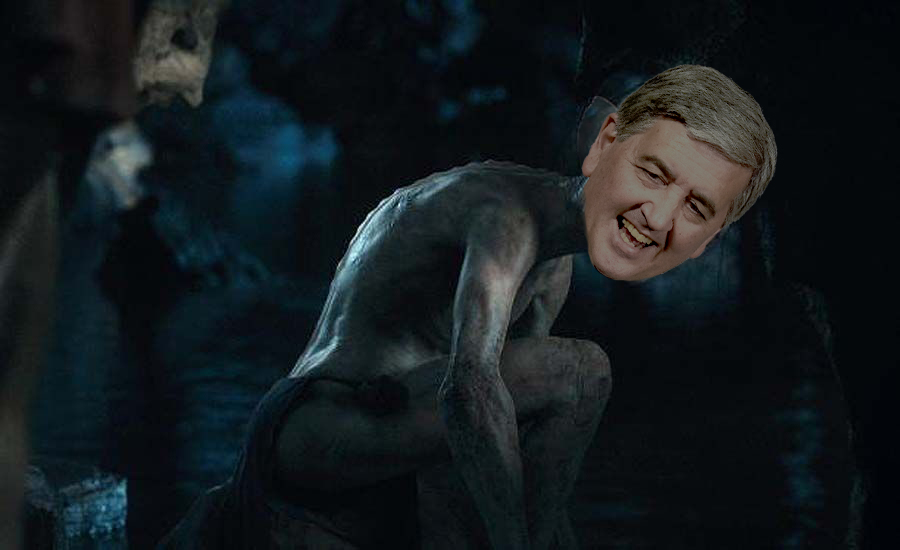 And much like Gollum, Lucas sees his precious revenue grab as the secret to a long political life, even as it destroys him.

The resentment festering among the smallish coterie of former Liberal true believers – who were today proclaiming that they had finished doing business in SA – will continue to haunt the Government.

Its ghost whispered in parliament last night, when Steve Murray – fast emerging as the spiritual leader of the Liberal Right, a faction marginalised in the party-room but on the ascendant in the branches – once again opted to abstain on the final vote.

Whether that resentment drifts into the broader electorate rather depends on who is proved correct: Lucas, or the doomsayers who argue that the broader fallout of the aggregation changes will unleash merry hell on the SA economy, with one company director putting it succinctly on a post-vote Facebook roast: “The damage they have done to South Australia will be felt for generations. No one will escape the fall out from this. It will cost everyone.”

This is, of course, not a view to which the Treasurer subscribes.

Indeed, no Treasurer, however stubborn – and Lucas is surely stubborn – would knowingly pass a law that would have such a detrimental effect.

Rather, Lucas is banking on the winners from his overall package – and, by his reckoning, that’s 92 per cent of individual land taxpayers – thanking the Government for its largesse at the earlier opportunity. Which is March 2022.

However unconventional this policy process has been – and it has been very, very strange indeed – Lucas does deserve credit for doing something Labor failed to do when confronted with a Legislative Council roadblock on things like time zones and bank tax: negotiating, compromising and getting a Bill through.

Sure, it doesn’t look much (or anything, really) like the Bill he started with, but he’ll still be raking in more than $80 million a year in aggregated property receipts – twice the total he envisioned when he first stood up on budget day and spoke of “an improved approach to the aggregation of land for land tax purposes… looking through separate legal structures to determine the true owner of land, levelling the playing field for all taxpayers”.

The more interesting question is – why?

Why sell the farm for this Bill, when the Government simply shrugged its shoulders and walked away from promised reform on things like shop trading deregulation and council rate-capping when faced with a belligerent Upper House crossbench?

Or does this now signal a new era of crash-through-or-crash from a Government approaching the halfway mark of its first-term tenure?

With parliament expected to be prorogued, we’re likely to see the reintroduction of various legislative measures – in some form or other – that have previously been thrown in the too-hard basket.

In the past, the Government has taken an all-or-nothing approach, favouring legislative purity over political pragmatism.

On land tax, however, it became pretty clear as the circus rolled on that Lucas had his proverbial chequebook open to anyone with a gripe about the legislation.

By the end, even the Greens – who had long supported the Bill anyway – realised they’d dudded themselves out of the horse-trading and swiftly threatened to withdraw their support, prompting yet more last-second sweeteners.

The land tax debate has never been just about legislating some financial changes: it’s been about the Liberal Government’s relationship with its base, and a crash course in the art of political compromise.

Perhaps the legacy the Liberals will take from this wholly bizarre saga is that sometimes you need to get to the finish line – even if there’s only one wheel left on the chariot.