Transport Minister Stephan Knoll announced last week that, as The Advertiser put it, “bus passengers would be forced to transfer to trains and trams under a proposed public transport overhaul aimed at reversing declining patronage and getting commuters to their destination faster”.

He also said South Australia has “the worst level of integration between the different modes of public transport”.

However, the reality is that Adelaide’s train and tram network does not lend itself easily to close integration of rail and bus systems, in the way that most other Australian cities do. Other major cities generally have much more intensive rail networks, while in Adelaide only a small proportion of suburbs have a rail line anywhere nearby.

In Adelaide, our suburban rail system terminates on the edge of the CBD, while other major cities have, in most cases, provided their rail networks with rail links under their CBDs, so they serve the city centres much better than does ours.

In Adelaide, a major advantage of our radial bus network is that it operates right through the CBD. Attempts made in the past to replace radial bus routes with bus feeders to rail, or to other buses, have meet with strong opposition and patronage loss.

While it is so easy to park a car in Adelaide’s CBD, the public transport network needs to provide CBD access as good as that provided by the car. To force more bus passengers to transfer onto rail, without providing our rail system with an underground link in the CBD, will only result in patronage losses.

Adelaide does already have feeder buses to rail (or O-Bahn)  in outer suburbs where the distances involved mean that the rail or O-Bahn system easily beats the bus system in terms of travel time. This advantage outweighs the disadvantage of having to transfer from bus to train, and then to have to walk or catch a tram into the CBD.

This situation does not apply to inner suburbs, where bus routes generally follow relatively direct routes into the city.

Detouring those bus routes to terminate at a station would result in increased travel time for the majority. As an example, if you lived near Main North Road at Clearview, would you like to have your Main North Road to King William Street bus replaced by one that went across the suburbs to Islington (the nearest station), where you would suffer an inconvenient transfer,  then be dropped by the train at North Terrace?

Extensive rail feeder buses cover suburbs north of Mawson Lakes and south of Hallett Cove. There are still some radial bus routes from those suburbs to the city, but up to 50 per cent of the passengers on those routes are not travelling to or from the city so may be disadvantaged by removal of their route.

Beyond Port Adelaide, radial bus routes were replaced by feeders to rail in the early 1990s in the face of strong opposition and resultant patronage losses. Since then, some bus services have reverted to radial. One of those routes (the 150) served many people living beyond walking distance of the trains and was cut by this Government in January this year. A nearby feeder bus route introduced in the 1990s was drastically cut because it was poorly patronised – but in recent times it had provided very poor connections with the rail system, so that was to be expected.

South of Oaklands Station, some experiments with feeder services have been unsuccessful, although there could still be several bus routes that could feed into the new Oaklands Station.

The Happy Valley, Reynella and Morphett Vale areas are served by very long radial bus routes but the Seaford Railway is too far to the west to provide a viable alternative, and the extended Tonsley Line to Flinders is unlikely to provide attractive travel times into the centre of the CBD in comparison with those buses that use King William Street. In addition, as with the north, many passengers on those bus routes are not travelling to the city but are travelling from outer to inner suburbs not served by the rail.

Feeding buses into our small tram network might seem sensible, because at least the trams serve the CBD well.

Unfortunately, there would be no travel time saving for passengers as the tram and bus travel times to the City from Glenelg are similar. Taking transfer times and inconvenience into account, the bus passengers would be worse off if transferred to the tram.

In addition, breaking up of radial bus routes into separate feeder routes would inconvenience passengers now travelling from, say, Anzac Highway to Marion Shopping Centre. None of this, of course, makes allowance for the fact that additional trams – at $6 million each – would be required to cater for the city-bound bus passengers. 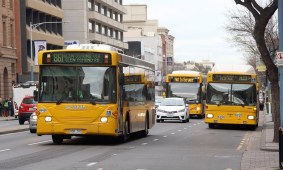 It is interesting that one of the main reasons the Liberal Government chose the O-Bahn system over a light rail system around 1980 was that the O-Bahn would be able to provide a network in which the proportion of passengers having to change vehicles on their journey would be minimised. Now a Liberal Transport Minister wants to implement the opposite approach with the rest of the bus network.