Alexander Downer told more than 16,000 Hills residents the night before the election that they were uncouth peasants, undeserving of living in his fiefdom.

Well, he didn’t use those words – but that’s how they were received.

“We are Adelaide Hills people and been in politics here for decades and through multiple elections never come across such abuse. Sharkie supporters have brought such horrible hate to our district. You must all be new arrivals.”

The former member for Mayo and Howard-era minister had jumped onto the Adelaide Hills Chat Facebook group to defend his wife Nicky who had, in turn, been complaining about abuse directed her way in the online forum after she had promoted daughter Georgina’s candidacy.

While it’s natural for a father to defend his family – and we all know how nasty online debate can get  – the words he used demonstrated exactly why many people in Mayo, including regular Liberal voters, rejected the Georgina Downer candidacy on Saturday.

The sense of entitlement – the idea that Mayo was “their” seat – was the takeaway message, if only because readers expected it from him.

The attack on Sharkie herself, like the rest of the campaign’s attempts to bring her down, simply didn’t wash with voters who have now made the seat very safe for the Centre Alliance – a party whose name didn’t exist just a few months ago.

ABC election analyst Antony Green may well be correct in his assertion that Sharkie would have won the seat no matter who the Liberal Party put up against her.

But the Liberal campaign – from candidate selection to messaging – made life particularly easy for Sharkie.

It was a cookie-cutter campaign: negatives in black-and-white; promises in colour; corflutes everywhere; high-profile political support.

Yet, Mayo is no longer a normal kind of seat. Sharkie, well-liked and well-connected within Mayo, won with a swing of just over 3 per cent, to take a very comfortable 58 per cent share of the two-party-preferred vote.

She achieved a substantial lead on primaries over Downer – 44.87 per cent to 36.75. Labor and the Greens polled about 15 per cent of primaries between them – and the vast majority of those preferences flowed to Sharkie. Downer was isolated and outflanked.

Remember that Sharkie achieved the swing after resigning as part of the dual citizenship saga, against all of the resources of the Liberal Party, and after her former party boss Nick Xenophon was soundly defeated in the recent state election. Xenophon played no substantial role in the by-election campaign, unlike in 2016 when Sharkie’s wagon was hitched to Xenophon’s then-powerful brand.

Saturday, then, wasn’t about Xenophon: it was about Sharkie and her performance as member since 2016.

The polls didn’t shift throughout the long campaign. People had made up their minds as soon as Downer’s candidacy was announced and everything the Liberals did after that only seemed to reinforce Sharkie’s strengths.

Georgina Downer grew up in the Hills but everyone knew she moved back from Victoria for the election.

At the very least, it put Downer on the back foot. At worst, it clouded her message and reinforced the anti-establishment sentiment that has always resided in the rolling hills and valleys of Mayo.

Focus group research in Mayo by the University of Canberra found that voters identified Sharkie strongly with the seat (“she bleeds Mayo”) and, with echoes of the reaction to Alexander Downer’s misjudged Facebook post, the researchers found that voters considered the Downers to be part of a community in Mayo that, for many, no longer exists:

“Sharkie and Downer are perceived to represent two very different Mayos. Downer represents old ‘blue ribbon’ Mayo (as did the disgraced [former Liberal member] Jamie Briggs), home to the Adelaide elite, and Sharkie represents new Mayo which is reflected with changing community demographics which include households from a much broader range of income groups including young families who are looking for active community-minded representation.”

By bringing in a parade of ministers from interstate, the Liberals only reinforced the view that Downer was an outsider to the electorate but an insider of mainstream politics.

Mayo has always been vulnerable to a third-party candidate of broad appeal.

Sharkie has a background in the Liberal Party and political support that ranges from previous Labor supporters to the likes of Bob Katter, a social conservative who was one of the many jovial attendees at her election night party in Mt Barker. She can’t be pegged at left or right: voters identify her with the sensible centre.

Downer, however, with her links to the IPA think-tank and her previous positions on hot-button issues such as the future of the ABC, appealed to a much narrower demographic.

The Liberal campaign, bringing in the likes of Peter Dutton and Craig Laundy, only reinforced this.

Downer’s political positioning in the right of the Liberal Party also motivated Labor and progressive activists GetUp! to put their considerable combined campaigning resources behind Sharkie, or perhaps more precisely, against Downer.

Sharkie, for example, didn’t have to run with negatives about Downer: Labor and GetUp! did that for her (there’s no evidence the campaigns were formally coordinated).

She could focus her scarce campaign funds where it mattered most, backed by more than 750 motivated volunteers. 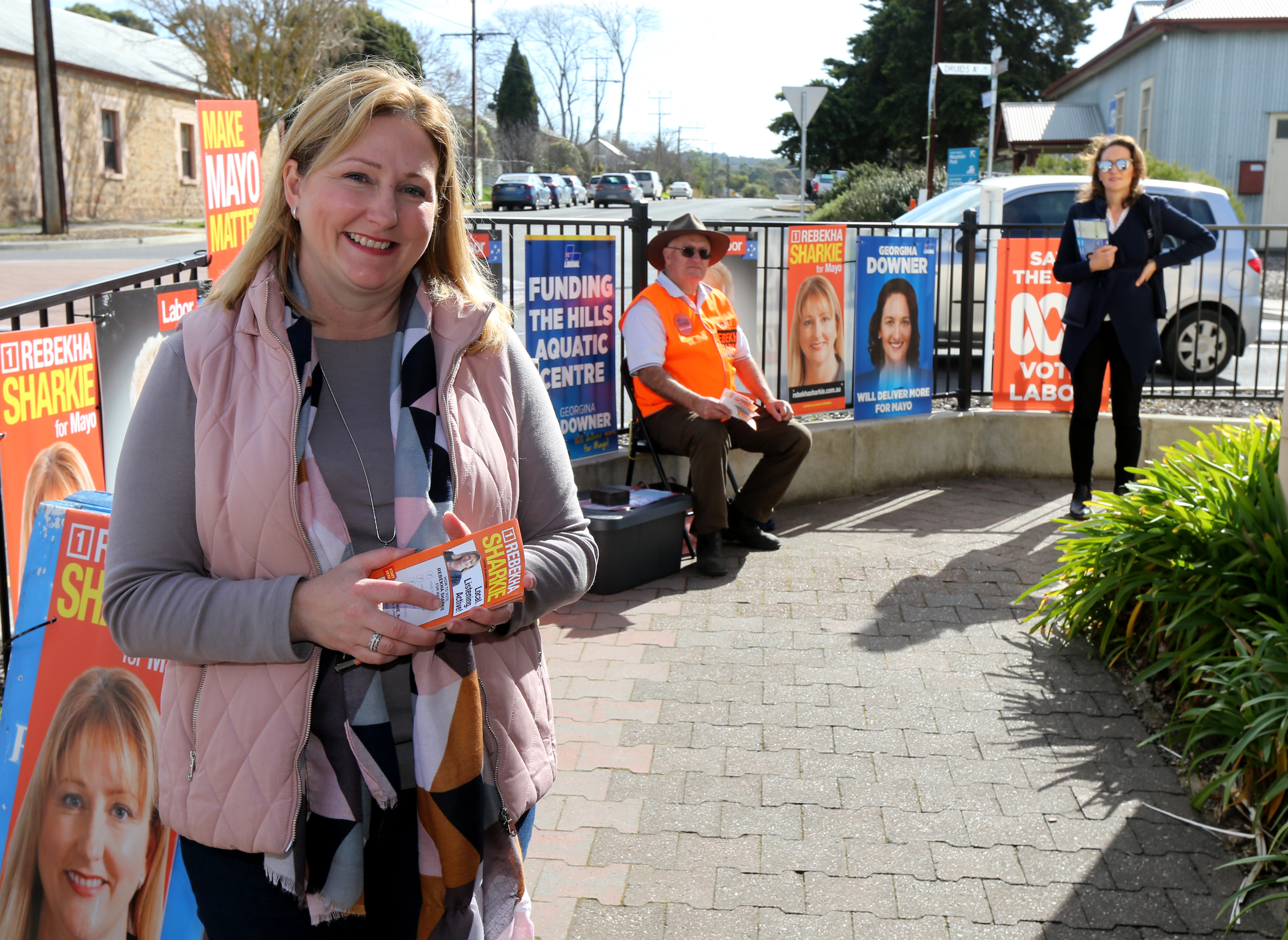 Downer’s deletion of her Twitter account and tight moderation of her Facebook page reinforced perceptions that she was trying to conceal her genuine views. This approach seemed inauthentic. (As one political insider observed to me today, it’s a lesson for political hopefuls attracted by the bright lights of Sky News and ABC-TV panel shows – your controversial views might get you air-time but they will remain on YouTube forever.)

Downer, articulate and clearly intelligent, was rarely able to present herself as an individual with unique strengths: she was always connected with her family, the Federal Liberal Government, or her previous employer, the Institute of Public Affairs.

Given she was standing against an ostensible independent, and a well-known one at that, this dynamic was highly damaging.

The Liberals seemed to believe that the idea of Downer being “Cabinet material” and well-connected in Canberra were selling points. Wrong.

These messages again reinforced perceptions that Downer was part of the political establishment while bolstering Sharkie’s proposition that she was truly independent and only seeking to look after her electorate rather than furthering her personal political ambitions.

The last Liberal to hold Mayo – Jamie Briggs – was a cabinet minister but became very unpopular locally after he was forced to quit the ministry over his behaviour towards a female public servant. Yet, his electoral performance in 2016 was better than Downer’s.

The Liberals tried to connect Sharkie with Labor leader Bill Shorten. This failed as a strategy.

Many previous Labor voters happily sent their primary vote Sharkie’s way. Labor didn’t seem to care if its primary vote was very low – its campaigning explicitly supported Sharkie’s key messages and strengths. Even its candidate, Reg Coutts, said openly that his aim was to prevent the Downer dynasty returning Mayo.

If Georgina Downer wins preselection to be the Liberals’ Mayo candidate for the upcoming federal election, she will need to work hard to diminish the “outsider” factor and overcome the idea of entitlement.

She will, no doubt, work hard to develop her own unique profile, separate from her family’s.

However, it will likely be an insurmountable task to tackle the anti-establishment sentiment now entrenched in Mayo.

The numbers tell the story.

The Liberals’ primary vote of 36.75 per cent on the weekend was the lowest for the Liberals in the seat’s history, slightly below Briggs’ vote of 37.8 per cent in 2016.

By contrast, Alexander Downer’s lowest primary vote was 45.6 per cent in 1998 – and he very nearly lost that election to Australian Democrats candidate John Schumann.

Sharkie achieved about that on Saturday, with an advantage that Alexander Downer didn’t have: a strong flow of preferences from two other well-organised parties.

A redistribution of Mayo for the next general election will see the seat take on sections of the strongly-held Labor seat of Kingston.

The task for Georgina Downer is not going to get much easier, regardless of the fortunes of her party in Canberra.