In the midst of robust media debate about local government rate-capping and continued heat on council spending, the state’s most prominent council – the City of Adelaide – last week asked the public to come in and discuss its draft budget for the coming year.

Tuesday’s meeting was the last chance for civic-minded members of the community to confront council members about their priorities, challenge the dollars and cents, and have their say on the council’s road ahead.

As we’re told regularly by certain pundits, the people are demanding real change. They want councils to forget flights of fancy and “get back to basics”: roads, rubbish and rates.

So how many people stormed Town Hall with their pitchforks and flaming torches?

In a local government election year, a solitary person cared enough to talk to the meeting and that was about a fairly niche concern (potential future funding for the Adelaide marathon).

Lord Mayor Martin Haese repeatedly called for other representations from the gallery. None were forthcoming.

The meeting had to stay open for a full hour to meet legislative requirements.

Haese offered the single speaker as long as she wanted to discuss the Adelaide Marathon, asked question after question and stringing the thing out for 25 minutes.

The rest of the meeting was punctuated with Dorothy Dixers for council staff and awkward jokes about filling time.

It’s pretty much the same story across metropolitan Adelaide: few of us attend council meetings, few of us take the opportunity to have a say about what our council is doing and, unsurprisingly, very few of us vote.

Quite obviously, if the community has little care factor for the level of government closest to it, then the quality of that government is going to be… well… patchy at best.

This is the most powerful argument for extending compulsory voting – already in place for state and federal elections – to the third tier of government.

Because if trends continue, less than a third of us will engage cast a vote in the council elections coming up later this year.

The high watermark of voting participation – 40 per cent – happened nearly two decades ago, as the statistics below indicate. 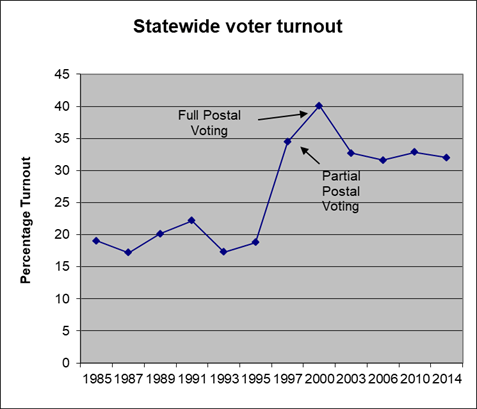 The chart, prepared by the Local Government Association, shows that voter participation went up due to the added convenience of postal voting, but that initial “enthusiasm” – as mild as it was – has waned.

In 2014, just over 30 per cent of eligible voters took the opportunity to lodge their vote. The council-by-council figures are revealing: generally, the smaller the council area, the higher the participation and, presumably, the sense of ownership of the community’s decision-making body.

The highest voter turnout in 2014 was for the tiny council of Orroroo-Carrieton, with just 748 enrolled voters. Nearly eight in 10 eligible voters – 77.67 per cent – returned their ballot papers.

Across the state, country council elections attracted a much higher voter turnout (43.28 per cent) than metropolitan polls (27.74 per cent) – no doubt indicating the greater investment of country people in their community than their cousins in the big smoke who are more likely to identify with the broader city, or even their more general suburban location, than an individual council area.

The statistics also contain food for thought for advocates of more council amalgamations.

Walkerville Council – a tiny survivor of the mass council amalgamations of the late 1990s – recorded the highest voter turnout of the metropolitan councils (41.96 per cent).

Since 2014, Onkaparinga has become the poster child for local government reformists, thanks to its eye-watering credit card bills and its CEO’s now renounced golf club membership.

But while ratepayer activists have played a key role in keeping the council to account, the reality is that under a quarter of eligible voters in the area bothered to have a say about who would represent them.

In the city of Adelaide, seat of the highest-profile council in the state, a slightly above-average 35.76 per cent of electors lodged a vote – hardly a resounding participation rate.

The local media, by and large, does a fair job in holding councils to account, but the number of journalists is shrinking and the Messenger newspaper network – which once offered blanket coverage of councils – has been contracting both in the number of newspaper titles and journalists assigned to them. Staffing numbers are at rock-bottom. Without question, media staff employed by councils outnumber reporters covering the local government beat.

In contrast to high-profile investigations, such as the aforementioned Onkaparinga stories, there are some councils in Adelaide that are now virtually uncovered by the media.

And given the well-known financial problems besetting the media industry, that’s unlikely to change.

Even so, the sad truth might be that even if more light was cast, public engagement with councils would stay at minimal levels.

Before the 2014 council elections, Burnside Council had been the subject of years of negative press, reflecting internal shenanigans ranging from the trivial to the very serious. Burnside locals reacted to the controversy with insouciance. In 2014, the voter turnout in Burnside was below the state average, at a mere 28.88 per cent.

Voter turnout seems inversely proportional to public perceptions of performance. Instead of spurring citizens to rush to the halls of democracy, negative publicity seems to drive us to detachment.

For critics of local government, the answer to poor performance of the sector is a mix of measures – none of which appear to do anything to increase community engagement nor improve the accountability or efficiency of the sector.

On the face of it, rate-capping can do little to address mismanagement and maladministration which, based on numerous Ombudsman’s investigations both published and in train, is widespread.

Amalgamations won’t do anything to improve the transparency of local government officials. In fact, as we have seen in the case of Onkaparinga, larger councils inevitably require big bureaucracies which create their own internal make-work – more layers of management, “team-building” expenses etc.

Regardless of how you view their performance, crushing the councils’ representative body, the Local Government Association (LGA), which appears to be the end-game for some critics, would do nothing to improve community engagement with the sector. In fact, it is likely to make individual councils easier to “pick off” by vested interests who see them as posing unnecessary barriers to their ambitions (hello, development industry!).

Related to this, maybe many of us are disengaged because we know that many of the big planning decisions have been taken out of council’s hands – they are mere bystanders to decisions made behind closed doors elsewhere.

Nevertheless, people do care about the issues that remain in the grip of local government – but perhaps they just don’t realise that they have the capacity to have a say.

When my colleague Tom Richardson joined state election candidates on the streets of Adelaide during this year’s campaign, he was struck by the volume of issues raised by residents that weren’t the responsibility of state MPs, but council issues – if people have grievances, they are often local ones.

The dynamic around local government is now an unappetising brew of misunderstanding and disengagement, mixed in a cauldron of disdain. The sector has a responsibility to try to turn this around, but so too does the wider community.

No doubt there are serious and entrenched problems with the way councils sometimes conduct themselves – we’ve reported many of them in these pages – but unless enough people in affected communities care, then nothing is going to change for the better.

Compulsory voting could be the best way forward. At least then – for a few moments every four years – people will be forced to consider their local representation.

Just as importantly, those seeking to represent us will have to engage more broadly with the community, instead of relying on tiny numbers of votes to get across the line (remembering that some local councillors are elected uncontested). Then, during their term in office, our local councillors are much more likely to pay closer attention to the needs and voices of their community.