It is clear that South Australian voters are suckers for large, State Government-endorsed, schemes and projects. We always believe, contrary to historical experience and common sense, that this time the government will stop the state’s economic slide compared with Australia as a whole.

The latest big bang projects to capture our attention are Elon Musk’s “World’s Biggest Battery” at Jamestown and the “World’s Biggest Solar Thermal Power Plant” at Port Augusta. These will save our bacon or, at least, bring the price of electricity down and stop the lights going out.

Earlier in Jay Weatherill’s term as Premier, it was the world’s greatest international nuclear dump which was proposed to fuel an economic bonanza for the state.

Even earlier, and much more modestly, it was an oil and gas hub at Gillman (to employ 6000 or so people) that Premier Weatherill signed up for – without going to a competitive tender of proposals for the site. The consortium chosen has now abandoned its development proposals.

Never forget Gillman: it should be etched in the minds of all South Australians.

The land itself is a left-over reminder of a government boondoggle from a quarter of a century ago – the Multifunction Polis (always known as the MFP).

I was involved in the, eventually-winning, South Australian proposal to host the MFP, so my hands are not clean in the boondoggling business.

In January 1987, the Japanese Ministry of International Trade and Industry (MITI) proposed at the ninth Australia-Japan Ministerial Committee Meeting in Canberra that Australia should host a Multifunction Polis, seen as a forum for international exchange in the region and a model for new industries and new lifestyles looking ahead to the twenty-first century.

From the Greek word “polis”, meaning “city”, the MFP was imagined as a place where work and leisure, lifetime education and intercultural exchange, research and manufacturing would be uniquely integrated.

The truth is, no-one had any idea what this all meant on the ground.

The MFP was also seen in some quarters as an even more radical departure – a zone of shared sovereignty in visas, tax, globalisation, company law, and so on – a commercial, educational and scientific “carve out” from Australia. Hence the idea in some quarters that the MFP was to be a Japanese enclave.

John Button, Minister for Industry, Innovation and Science in the Hawke Labor Government at the time, had political carriage of this very undefined proposal. Late in 1988, he set up a competitive process between the states for the right to host the MFP (whatever it might be). The state governments of New South Wales, Victoria, Queensland, South Australia, Western Australia and the ACT all set up MFP development units to prepare proposals.

Late in 1989, I was asked by Premier John Bannon if I would do the economics for the South Australian proposal. I had just been appointed by Treasurer Paul Keating as an associate commissioner to the Industries Assistance Commission’s Inquiry on Mining and Minerals Processing, and was about to be fully occupied by mine site visits over the academic summer break. I asked for a team of people to do the work, nominating outstanding public servants whom I hoped would be impossible to obtain. By the afternoon, Bannon had got them all. 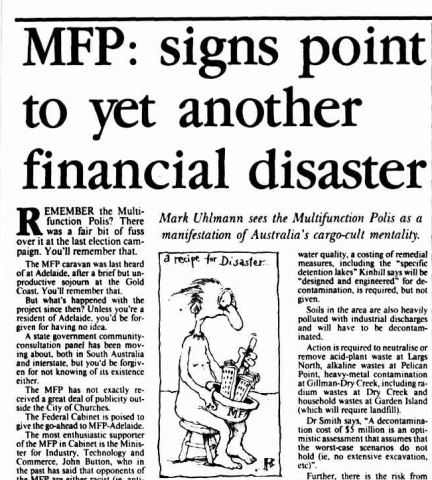 A 1991 report on the MFP in The Canberra Times.

As I set off with the IAC mining industry inquiry team for Roxby Downs and Western Australia, I asked my newly-appointed second-in-command on the SA/MFP economics team to get data on the ideas in the South Australian MFP draft proposal. On the first night in Perth, I phoned him: “Tell me about the data”.

We worked creatively. By April 1990, we had it nailed. I was interviewed by the Commonwealth’s MFP team in the Vice-Chancellor’s Committee Room at Flinders University. I will never forget what the chairman said: “This is the finest example of rubbery figures I have ever seen.”

Our rubbery figures turned out to be better than anyone else’s rubbery figures – except Queensland’s. When Queensland Premier Wayne Goss turned down the offer to host the MFP at the Gold Coast, it was offered to South Australia, to be established in the swamp at Gillman.

Premier Bannon accepted the offer in mid-1990 – with much public service jubilation and celebration, especially by the team that had worked on the South Australian bid. Soon, however, the first “No Jap City” signs started appearing in bus shelters and on stobie poles – which put a dampener on our enthusiasm.

In 1996, however, in the face of continuing criticism of this still ill-defined project, the Commonwealth Government gave up on the MFP and withdrew its funding. In 1998, the Olsen (Liberal) Government announced that the MFP was over.

The total cost of this government exercise in fantasy has been estimated at $150 million – at least $200 million in today’s dollar values.

What came out of it? Mawson Lakes and Technology Park are positives which have some echo of the original intent – at very significant further cost, of course. The rest of Gillman remains the swamp that it always was.

What are the lessons to be drawn from the MFP fiasco? The most important lesson is not to believe government propaganda about great outcomes from projects that it sponsors. These claims are very difficult to pour cold water on, as the government is very up-beat about the contribution that its sponsored projects will make to the state. Critics are easily outgunned by the weight of the intellectual resources that the government can bring to bear in technical argument about possible outcomes. If all else fails, critics can be dismissed as “enemies of the state”!

It might be useful if all major government project proposals were routinely subject to independent evaluation by recognised international experts reporting to a joint committee of the South Australian Parliament, just as the Government’s proposed international nuclear waste dump was subjected to evaluation by the (American) Nuclear Economics Consulting Group (NECG) on behalf of such a committee.

I wrote an earlier article for InDaily about NECG’s devastating critique of the economic case presented in support of the dump. NECG’s review strongly supported the critical views of the expert economic witnesses that spoke to the Second Citizens’ Jury: the dump could easily make a loss and not be the bonanza that the royal commission and the Government made it out to be.

Without NECG’s supportive evaluation to the Joint Committee of the South Australian Parliament, the expert local witnesses against the dump would almost certainly have been overrun by Government spruikers – and South Australians would be looking at a probable economic fiasco for a very long time.