August 31 marks the 20th anniversary of the death of Diana, Princess of Wales, in a car crash in Paris. It is already the subject of widespread coverage, with commemorative editions of magazines and television documentaries about her life and death. This is in marked contrast to the relatively subdued acknowledgement of earlier anniversaries.

Diana’s sons, Princes William and Harry, are using the occasion to commemorate their mother’s memory and to emphasise the lasting effect she had on the British monarchy. They are leading a media campaign that suggests the monarchy is as popular today because of their mother’s legacy, not in spite of it.

The queen, in particular, now stands as one of the most popular and long-reigning monarchs Britain has ever had. Such is her popularity, it seems very likely that she will remain a royal favourite despite the renewed interest in her and Diana’s often difficult relationship.

Many will view with interest the candid videos of Diana talking about her neglect and unhappiness within the royal system – and at the hands of the monarch in particular – which the UK’s ITV/Channel 4 is due to air this month. However, William’s and Harry’s early intervention into their mother’s story will hold sway with the public. It’s likely the monarchy – embodied with traces of Diana’s face and charm in the guise of the young princes – will be invigorated, not diminished, by her memory.

The ITV/Channel 4 tapes of Diana’s “interview” with her voice coach Peter Settelen (never an interview so much as a training tape Diana recorded in 1991-1993 as a way of improving her public speaking skills) were aired on NBC in the US in 2004 and have been widely available on the internet ever since. The site has always enjoyed thousands of hits.

Nonetheless, the revelations contained in the Settelen tapes have not prevented the rise of the queen’s popularity, even among so-called “Diana-rists”. If anything, ITV’s broadcast of the tapes will offer the Windsors new opportunities to demonstrate the rehabilitation of their public image; emphasising again that their main concern has been, as always, the wellbeing of Diana’s sons. This will not do them any harm at all.

This was not the case in 1997, when the royals’ ill-judged response to Diana’s death presented the royal house with one of its greatest challenges in modern times. The queen’s personal approval rating dipped, according to IPSOS polls, to 66%, down from ratings in the 70-plus range that she had enjoyed since the 1950s. Prince Charles’s rating dropped to 59%, with only 36% believing he should ever be crowned.

Something had to be done. The Windsors mobilised and invested in some serious (and seriously expensive) public relations consultants to resuscitate their popularity.

Hitherto, generations of palace press secretaries had followed a PR rule that they should “never explain” and “always deny everything” to the media. Diana, by contrast, consistently, almost obsessively, broke with this code. Her direct contact with the public via the media redrew the lines of engagement between the palace and the press for ever more.

Charles and Diana at a Korean War commemorative service in November 1992. Reuters

It is an interesting coincidence that the 20th anniversary of Diana’s death aligns almost exactly with the 100th anniversary (July 17, 1917) of the royal house’s change of name from “Saxe-Coburg and Gotha” to “Windsor” in response to anti-German sentiment during the First World War. King George V, like his grand-daughter Queen Elizabeth II, knew a thing or two about monarchical survival.

The reaction to Diana’s death taught the Windsors that they needed to be more in touch with their and their public’s “feelings”. The queen once said, “I have to be seen to be believed,” but by the late 20th century the British public didn’t think this was enough. The royals had to be seen to be caring and in touch with the public to earn the people’s faith in the institution.

Boosting her public persona in this way had never been part of the queen’s make-up. Yet, in the Diana funeral week, she responded to advice from her household staff and from the prime minister, Tony Blair, and cut short her annual stay at Balmoral to come down to London to walk among the mourning crowd. She stood and listened to their stories of loss and she allowed the Union Flag to fly at half-mast above Buckingham Palace for the first time.

The queen, famously and on the record, does not do “stunts”. Nowadays she doesn’t only do more public “emoting”, but she also has been known to gesture ironically at herself – for instance, at the opening of the 2012 London Olympics when she was “seen” to be exiting a helicopter with Daniel Craig/James Bond.

William will be king one day; he looks like a Spencer; his tenure in the palace will encompass the traditions of the QEII age but will be redrawn in a modern context. The centrality of William and Harry to the reconfiguration of the Windsors in the 21st century is a deft way, too, of side-stepping the less popular idea that Charles, not William, will accede to the throne after the queen dies.

The “Diana-fication” of the monarchy is perhaps nowhere better represented than in a recent portrait of the queen by artist Kim Dong-Yoo that depicts an image of the smiling Elizabeth made up entirely of 1,106 individual pixelated images of the princess. 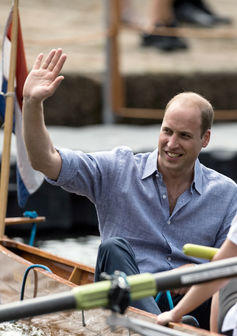 Prince William last month: he looks like a Spencer. Reuters

Recent IPSOS MORI polls have shown that the monarchy’s popularity – the queen’s in particular – is as strong as it was when she came to the throne in 1953. This is a remarkable feat in an increasingly culturally diverse and fractured Britain. In 1997, many predicted that the monarchy as an institution was in its death throes; today, public discourse points to it being an unwavering symbol of stability and endurance in a post-Brexit Britain.

Popular expression of the high regard in which the queen is held can be found in the spate of recent biopics about the royal family. Films such as Stephen Frears’s The Queen, Tom Hooper’s The King’s Speech and, most recently, Peter Morgan’s The Crown have been engaged in a project of re-centring the monarch at the heart of a royal narrative that had otherwise been overtaken by the tales of domestic scandal and woe of the Charles and Diana years.

In the early 1990s, the sovereign may well have had moments of wishing that her former daughter-in-law, the self-styled “Queen of People’s Hearts”, would simply fade away quietly. Little would she have realised that Diana, her heart rended asunder in a car crash in a Paris tunnel, would become instead the catalyst for the monarchy’s own rehabilitation of itself at the heart of the British nation.