Australians are using less alcohol, tobacco and other drugs than they did a decade ago, new results from the Australian Institute of Health and Welfare’s (AIHW) National Drug Strategy Household Survey show.

Although the drug of most concern to the general public is methamphetamine, the rate of methamphetamine use has been showing a steady decline since 1998 and, at 1.4%, is now at its lowest point since the survey began, down from 2.1% three years ago. 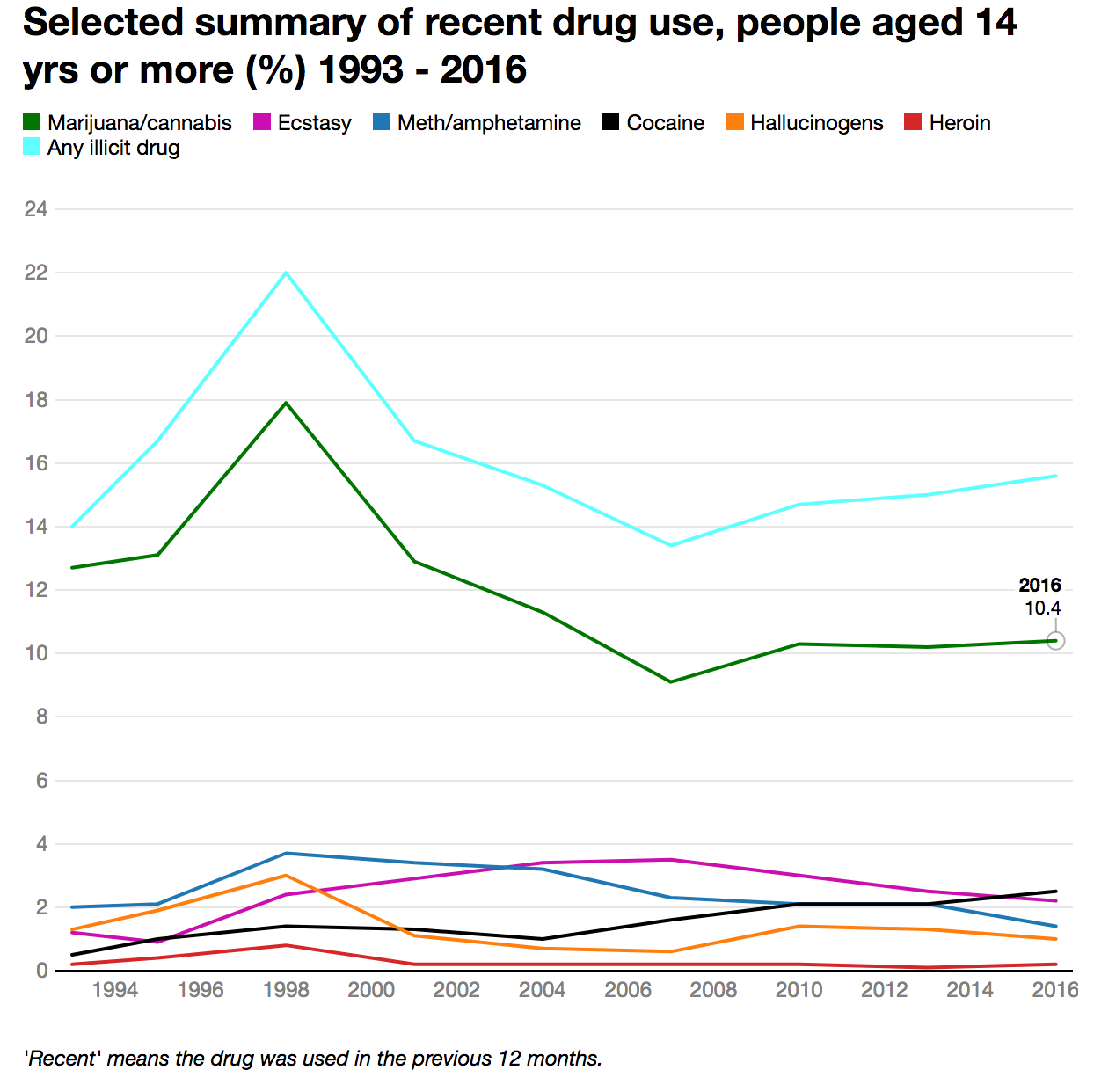 So why are people worried? The data over the past several years has shown a decrease in people who prefer to use the lower purity methamphetamine speed and an increase in people preferring to use the more potent crystal form, “ice”.

This trend continues in this survey. The drop in the proportion of people who use methamphetamine overall appears to be driven by fewer people using speed.

With an increase in crystal methamphetamine as the preferred form has come significant increases in harms.

Recent treatment data show an increase in treatment presentations – methamphetamine now represents close to 25% of drug treatment episodes – and there has been increases in ambulance call outs, hospital separations and deaths due to methamphetamine.

The trends in methamphetamine use and harms highlight why policies should focus on harms and harm reduction rather than use and use reduction.

In fact, illicit drug use more generally has decreased, mainly driven by a reduction among teenagers, suggesting that fewer young people are trying illicit drugs. This is also continuing a trend seen over the past decade.

Age of first drug use is on the rise

Not only are fewer people using illicit drugs, those who do are trying them later. Specifically methamphetamine, cannabis and hallucinogens showed an increase in the age of first use: 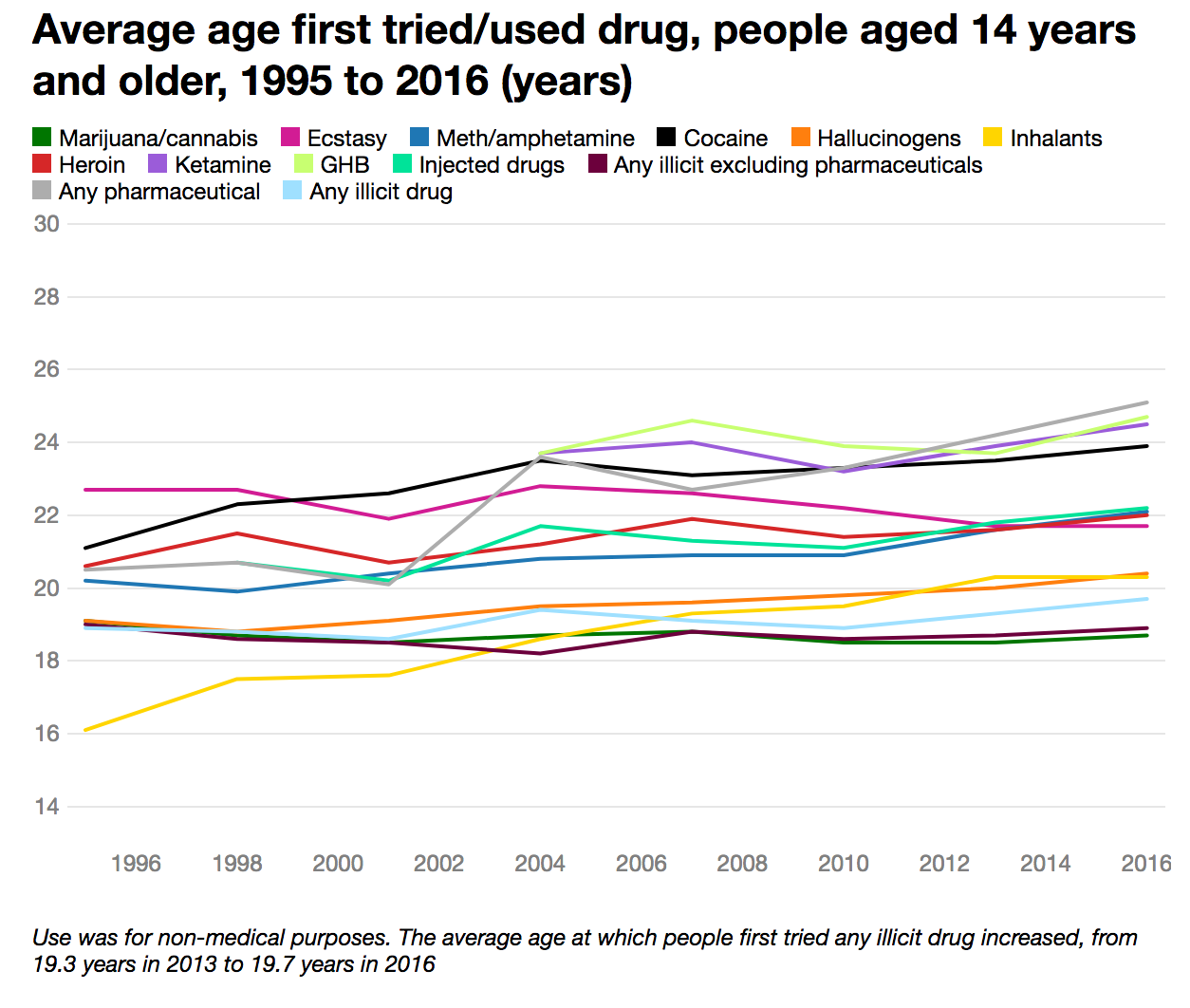 People aged 35-55 years have increased their use of illicit drugs significantly, driven primarily by increases in use of cannabis, methamphetamine and cocaine. We don’t know whether these are people new to using illicit drugs or people who have a history of use who have moved into an older age group.

Traditionally harm reduction messages have been primarily targeted at young people, but an important growing group of people at risk of harms is now those in middle age.

The proportion of people using illicit drugs in their 60s has also been increasing over time. Although the increase is relatively small from 2013 to 2016, people in their 60s have had the largest increase since 2001. This is mostly accounted for by use of pharmaceuticals for non-medical purposes. Careful monitoring of pharmaceutical prescriptions and over-the-counter medicines are part of a harm reduction solution.

Despite a lot of media interest in illicit drugs, it is still the legal drugs, alcohol and tobacco that cause most harm in the community.

The good news is that there was a decline in drinking that increases risk of harm over a lifetime (such as chronic health problems). For healthy men and women, drinking no more than two standard drinks on any day reduces the lifetime risk of harm from alcohol.

There was no overall change in drinking that increases risk on a single drinking occasion (such as injuries), but younger people under 30 years old showed a significant decline in risky drinking. For healthy men and women, drinking no more than four standard drinks on a single occasion reduces the immediate risk of alcohol-related harm. Alcohol-related incidents also decreased, and the proportion of people who reported never having a full glass of alcohol grew. 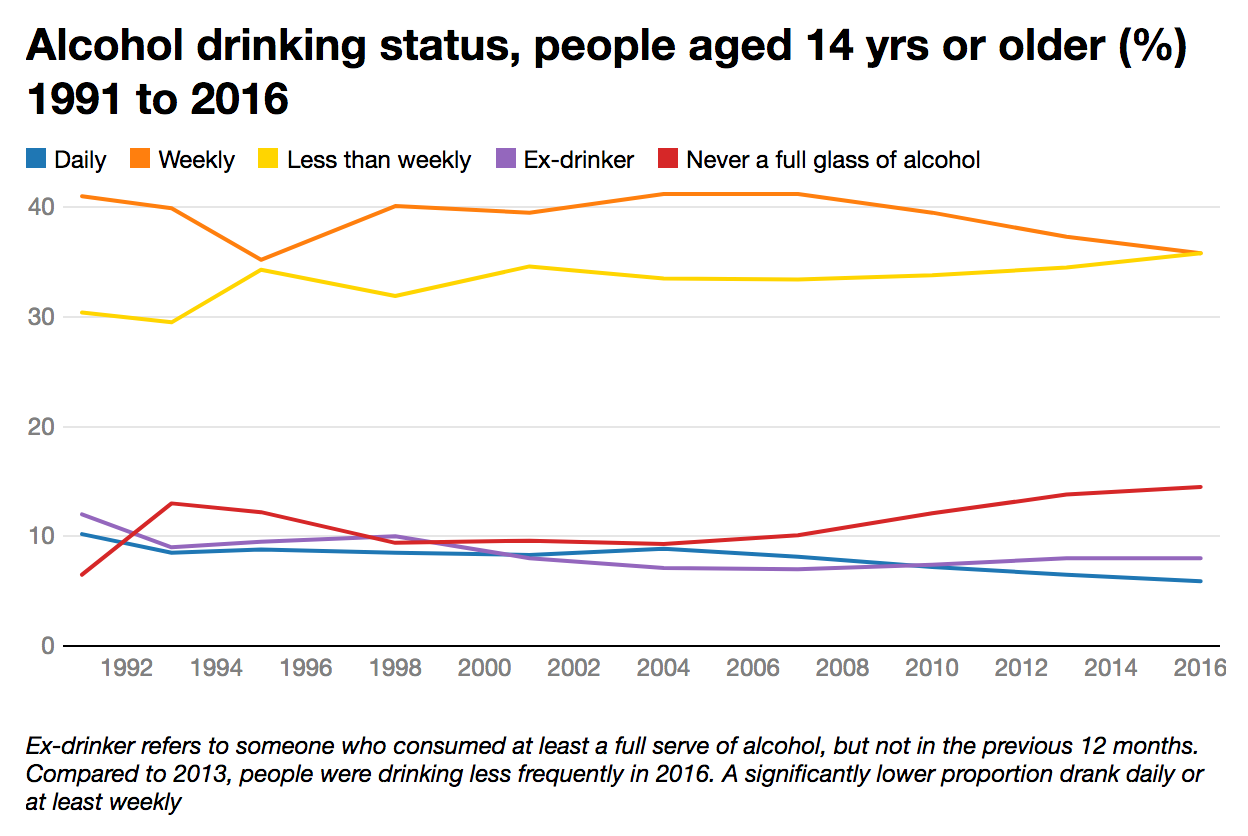 There was an increase in the proportion of the population who have never smoked and who are ex-smokers, with a significant decrease in teenagers who do not smoke.

Overall, legal and illegal drugs are showing a stable or downward trend in proportion of population who use them over the last decade or more. However, while fewer young people are using, the proportion of people using alcohol and other drugs in the older age groups has increased.