The federal government has announced a A$2 billion plan to expand the iconic Snowy Hydro scheme. It will carry out a feasibility study into the idea of adding “pumped hydro” storage capacity, which it says could power up to 500,000 homes.

Hydro is one of the oldest and most mature electricity generation technologies. And pumped hydro storage – in which water is pumped uphill for later use, rather than simply flowing downriver through a hydro power station – is the dominant form of energy storage globally.

But there are limitations to how much freshwater hydro can be accessed, so it’s worth looking at what alternate approaches are available. One promising prospect is to use seawater instead of rivers. This tactic could potentially help South Australia resolve its highly publicised energy problems.

The principle behind conventional hydro power is straightforward: rainwater runoff feeds a river, which is dammed to create a large reservoir of water. This is then gradually released through pipes to a turbine at the foot of the dam, thus converting the gravitational potential energy into electricity. The water then flows on downriver.

Hydro power is fossil-free and also “dispatchable” – it can be turned on or off at will (provided there is water in the dam). This gives it a significant advantage over wind turbines and solar photovoltaic (PV) panels, which produce power only when the wind blows or the sun shines.

Hydro thus makes an ideal partner for wind and solar PV, as it can adjust its output in response to changes in output from these non-dispatchable renewables.

Pumped hydro energy storage (PHES) is very similar to conventional hydro power but differs in that rather than being a generator, it’s more accurate to describe it as a battery.

Normally done at smaller scales than conventional hydro, PHES uses excess electricity from the grid (such as during periods of low demand and/or high generation) to pump water uphill from a lower reservoir to a higher one.

Later, this water is released back downhill through the turbine, returning the electricity to the grid when it is most needed – typically during the evening peak. It is this approach that is being considered in the Snowy Hydro 2.0 project.

Pumped hydro storage thus helps to “smooth out” peaks in demand by effectively transferring excess electricity from periods of low demand to periods of high demand. It has a “round trip” efficiency of ~80%, which is comparable to that of batteries. 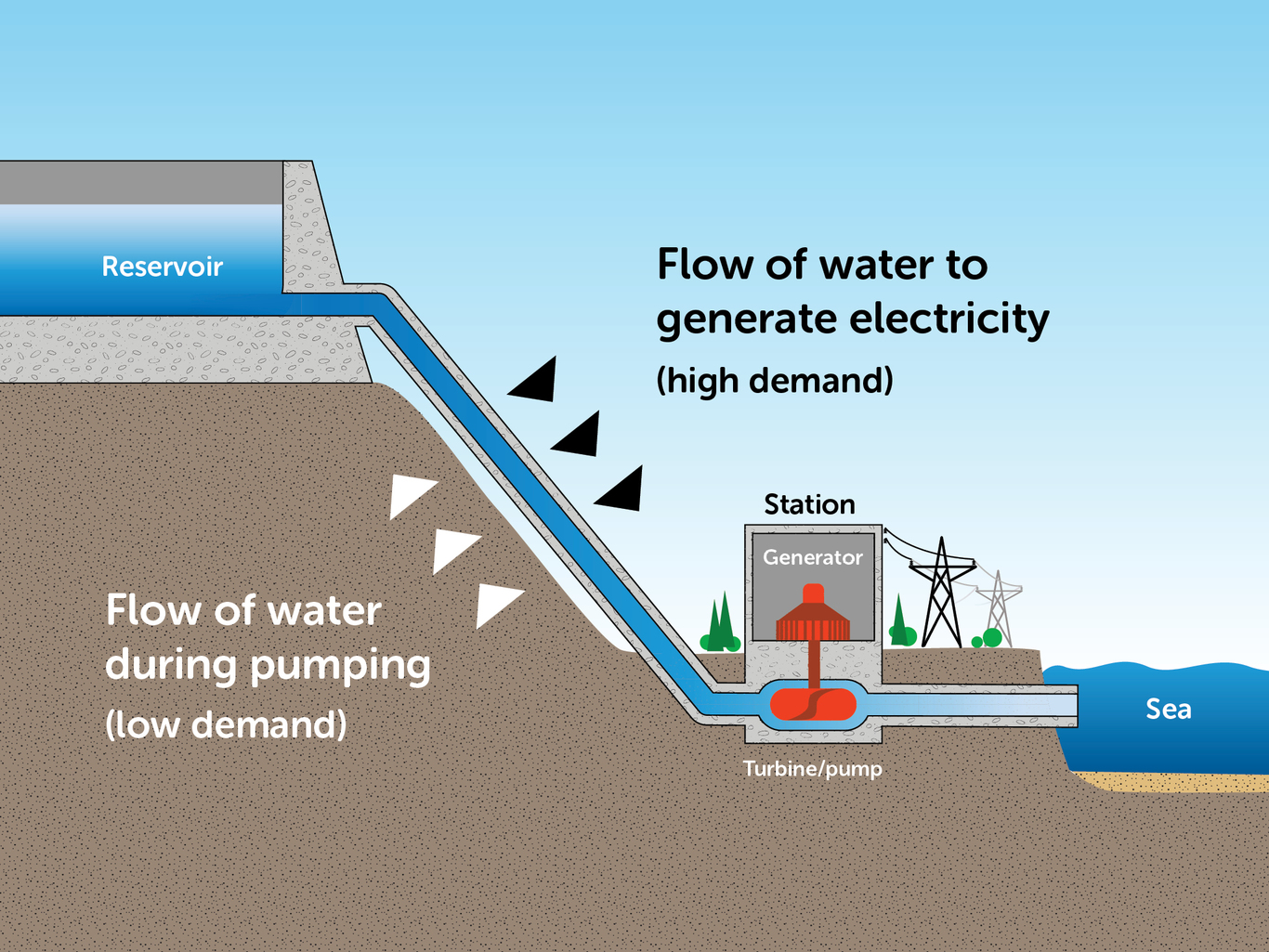 PHES is the most common form of grid-connected energy storage in the world, accounting for around 97% of the total. It is often built in partnership with “baseload” power generators such as coal and nuclear plants, to help them vary their output to cope with peaks and troughs in demand.

Australia already has three PHES facilities – at Tumut 3 in the Snowy Hydro Scheme, at Shoalhaven in New South Wales, and at Wivenhoe Dam on the Brisbane River in Queensland.

South Australia is arguably the place that is most in need of grid-scale energy storage. Unfortunately, South Australia lacks the rainfall, rivers and mountains to run a conventional hydro system, with or without storage.

However, there is a way to use this technology without rivers and mountains: by using the ocean as the lower reservoir, and building an artificial upper one.

The upper reservoir doesn’t need a river to feed it fresh water; it just needs to be significantly higher than the ocean (that is, there should be a steep slope on or near the coastline, up which the seawater can be pumped). Using seawater also avoids the need to divert freshwater resources into a large reservoir, where a significant amount would be lost through evaporation.

So far, only one seawater PHES installation has been built anywhere in the world – on the island of Okinawa, Japan. It came online in 1999 and was decommissioned in 2016, after Okinawa’s power requirements changed. Seventeen years for a first-of-its-kind project is a significant success. However, the Okinawa project was combined with a coal-fired power station, so linking this technology with intermittent renewables has never been trialled anywhere. 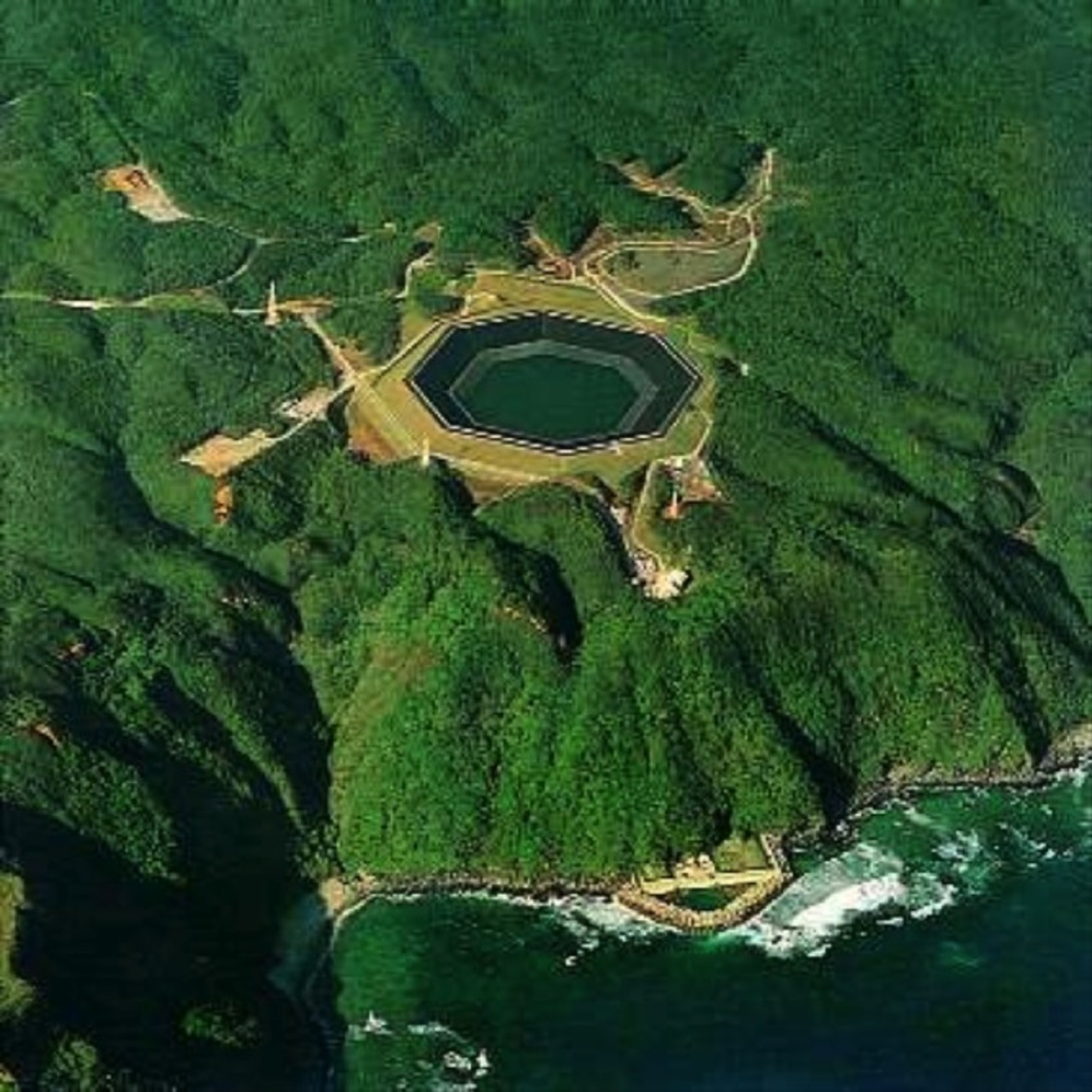 So could this technology help to ease South Australia’s energy crisis? The Melbourne Energy Institute (MEI) report on Pumped Hydro Opportunities identifies several potential seawater PHES locations in South Australia. This includes a very promising site at the northern end of the Spencer Gulf, with significant elevation close to the coast and close to high-capacity transmission lines.

The Department of Defence manages this land, and discussions are ongoing as to how the project might be designed to not interfere with the department’s operations on the site. A win–win development is the primary design aim.

The MEI study suggests that PHES could be delivered at around A$250 per kWh of storage. This compares well with utility-scale lithium ion battery storage, which currently costs of the order of A$800 per kWh, although recent annoucements on Twitter from Elon Musk suggest this might be coming down towards A$500 per kWh.

The Spencer Gulf site has the potential to provide at least 100 megawatts of dispatchable generation, effectively making the wind and solar generation in South Australia significantly more reliable.

The Australian Renewable Energy Agency (ARENA) will help fund a feasibility study into the technology, working with partners Energy Australia, Arup and MEI. If the facility is ultimately built, it could become a key element in SA’s bid to avoid future power blackouts.

Roger Dargaville is Deputy Director of the Melbourne Energy Institute at the University of Melbourne.