Are we through the looking glass?

After a deliberately unremarkable state budget, the most remarkable aspect is perhaps the fact that we have now lost any semblance of ideology.

Perhaps Nick Xenophon’s recent successes – after deliberately painting his fledgling team as occupying the pragmatic centre – is further evidence of the end of ideology, and perhaps it is a good thing.

But it makes it no less bizarre, other than to explain Opposition Leader Steven Marshall’s infamous election-eve “Vote Labor” gaffe.

The Treasurer came out and confirmed a modest surplus, predicated on the privatisation of public assets.

The Opposition Leader then emerged to chide him for the sell-off, before calling for greater public spending on Cost of Living concessions.

Now, that scenario would usually suggest a Liberal Treasurer and a Labor Opposition Leader, but of course now that we’re in some Bizarro World version of South Australia it was quite the opposite.

It got weirder, with economic rationalists chiding Koutsantonis for “flogging off the MAC”, as though they’d suddenly decided public ownership of assets is inherently a Very Grand State of Affairs.

There’s no doubt, of course, that this tenuous budget surplus is predicated largely on one-off sales and creative accounting – but it’s generally the domain of the Left to complain about selling the family silver for a quick buck.

The bigger question would be whether we’ve just become conditioned to believe that a surplus is, regardless, the Budget Endgame, or whether this creative accounting could yet yield its own dividends by way of appeasing the ratings agencies and making the state a relatively better investment prospect.

While undeniably a safe budget – stockpiling a surplus for a pre-election war-chest or in case Koutsantonis ever feels the need to flaunt his Labor roots with another spending spree stimulus – there are still inherent gambles.

Taking on the public sector unions – albeit in a ‘toe in the water, let’s see how this goes down’ kinda way – is always fraught (I’m sure none in the ALP ranks have forgotten how influential the unions were in the swift executions of Rann and Foley). But Koutsantonis is banking on the fact that the PSA et al will ultimately side with the ALP rather than risk a Liberal alternative – even one with a distinctly Labor hue.

And, of course, any longer term plans for big-ticket announcements in next year’s budget in the lead-up to the 2018 poll will be out the window in the event of another economic shock – which is hardly an unlikely prospect in the current political climate.

By largely holding fire on infrastructure largesse – particularly when borrowing is so historically cheap – Koutsantonis risks losing his surplus with nothing to show for it.

Of course, ultimately the next election will not be won off the back of Koutsantonis’s budget surplus. Nor Weatherill’s popularity or lack thereof, nor indeed any particular policy from either side of politics.

The single biggest factor that will decide the election outcome will be how the electoral boundaries are drawn.

And that throws up a dangerous proposition.

The Liberals are desperately hoping the boundaries commission, which this week published the fruits of its regional sojourn, will re-throw the electoral map in its favour.

If that happens, it would logically mean bolstering the Liberal bent in a range of metropolitan marginals while, presumably, skimming the fat off some of their regional strongholds.

But the boundaries commission can only operate on the basis of how people voted at the last election.

And next time round, the electoral contest could be very, very different.

As I wrote last week, the prospect of a narrow Liberal win at the federal election – still the most likely outcome, albeit more narrow than most imagined – is probably the worst outcome for all concerned.

Malcolm Turnbull’s political antenna is trashed, his authority greatly diminished and his rhetoric about stable Government demonstrably flawed. He will govern with an eye over his shoulder and may well face a challenge within his own partyroom. So too Bill Shorten; once the rosy glow of Labor’s better-than-expected performance subsides, party hardheads will realise that they still face another three years in Opposition, and wonder whether a different leader would have got them over the line, and whether they backed the right horse.

And then there’s the Senate: y’know, that house of review that needed a clean-out because it looked like the bar scene from Star Wars?

Yeah, so that went well.

Now it looks more like the bar scene from From Dusk Till Dawn – right after all the redneck vampires show up.

The Government will have a jolly old time trying to get anything done with a crossbench made up largely of Xenophons and xenophobes, with Turnbull’s great political legacy less likely to be any progressive liberal reform than facilitating the comeback of Hanson (as if “Mmm-Bop” wasn’t irritating enough the first time round!)

But what does it all mean for SA?

Let’s assume – just assume, mind you – that the Xenophon brand retains some of its sheen between now and 2018, and fields a raft of lower house candidates – as it did in the federal election.

Let’s assume – just assume – that local issues affecting voter confidence in seats such as Grey and Barker persist over the same period.

Let’s assume, too, that Xenophon’s new senators set up shop in areas such as Mt Barker and Victor Harbor, and establish a foothold in the local area.

The Liberals must be thanking their lucky stars Xenophon opted out of a preference deal that would have given him Grey and Barker, and would probably have ensured Steve Georganas victory in Hindmarsh.

If he had, it might have changed the entire election result.

But it would also have established an enduring legacy in what should be blue-ribbon Liberal seats. Once an independent is ensconced, they can be very hard to shift. And if the Xenophon Team makes a concerted show of the SA state election, whatever new boundaries the commission throws up could become, to recall Vickie Chapman’s famous phrase, about as useful as tits on a bull. 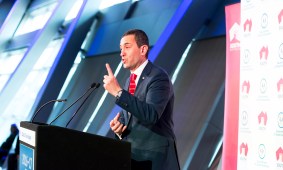 Tom's "turbo-charge" for the SA economy: new cash for jobs

So here’s a doomsday scenario to go on with.

What if, for once in three decades, the Libs finally get their way in the electoral redraw, making the metro marginals a vaguely better prospect but costing them a few thousand votes in their rural heartland.

And what if the loss of those few thousand Liberal supporters is enough to see a Xenophon candidate over the line by a handful of votes in a three-way contest in a Finniss, or a Heysen, or a Chaffey?

We really are through the looking glass here, people.