South Australia is in trouble. We’re too expensive, remote and insular – according to how we’re perceived interstate.

We must modernise, optimise and improve efficiency. Noses to the grindstone, work harder, longer, past retirement and for less money than before. Yet a few things aren’t quite adding up, even though perception is reality. There have been a lot of changes in technology in the last few years. It used to take hundreds of years between each major discovery, and now truly groundbreaking research has become a weekly event.

It’s not just research in laboratories – the price of electronics has dropped so fast and computing power has increased exponentially. Sometimes I just look at a cheap plastic toy, amazed at how much power it has for so little money. A lot of today’s innovations were being done decades ago, just at a much higher cost. Even Streetview was being done in 1978 with the Aspen Movie Map. Computer science was well established back in the 1960s, and what we use today is still based on achievements from that era.

This is starting to change, with networks creating a new environment with new possibilities. The general populace can now casually perform experiments that used to cost millions.

In Sweden, people with CPR certificates can register to receive an SMS when someone has a heart attack within 500m. 9,500 volunteers signed up and they get there before ambulances within 54% of the cases already. Being able to deploy this kind of project needs everyone to have equipment working to the same standard. In this case, mobile phones with GPS and SMS. Now everyone has smartphones with GPS, high resolution screens and the Internet –
which is a new level of functionality only starting to be explored.

One thing that is going to amaze us in the near future, and some of you will already have seen one, is the Oculus Rift VR headset. This concept was invented in 1968 by Ivan Sutherland, and there have been many failures to bring VR to market. Yet ongoing progress in display technologies, car airbag sensors and automated manufacturing technologies have combined in the last few years to make high quality VR cheap and generally available. This is happening across the board in multiple areas that separately seem disconnected, but in combination results in new products and capabilities.

In the meantime, there is a transition period from one level to the next. Our industries are dying off, the costs of our projects are soaring, and we’re losing future work. As projects get larger, the number of interactions increase exponentially. When parts of the project are being done by different companies, complexity increases… and then attempted cost savings and improvements increase that complexity even more – up to and past the point of a phase change.

Like the shift from solids to fluids to gas, there are different rules for massive projects costing in the billions. We’ve seen a lot of debate in the papers from a high level view, but things are different at the coal-face where the work gets done. Optimised and efficient processes are necessarily more complicated, and it takes a great deal of planning to align on the objectives.

The normal process of systems engineering is to divide problems up into modules, which are abstracted into layers and interfaces, reducing complexity through abstraction. Each specialisation is its own area with their own jargon. Aerospace engineering is different from electrical engineering which is different from fluid dynamics. Each of these systems are considered separately and then integrated. Unexpected results always happen on new systems that are being built for the first time. 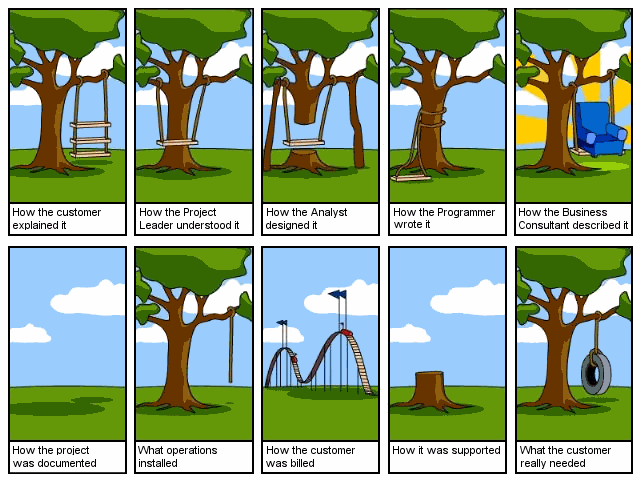 This is an old problem. Since NASA put Man on the Moon, there has been MIL-STD-973 defining information management standards which drives BIM (Building Information Management) and PLM (Product Lifecycle Management) systems supporting larger projects. With the diligent use of standards and carefully defined processes, the ideal of knowing the state of the project has been achieved to varying levels, depending on cost.

This is where the dramatic changes in technology make an impact. Computers have required carefully structured input, but they are increasingly capable of using sensors to read data from the real world. 3D printing has been causing excitement and will continue to improve, however scanning what has been made – however made – will have a more immediate impact as it leverages existing manufacturing methods.

This link shows how computers are able to recognise mechanical structures from mobile phone cameras.

By being able to interpret the real world through sensors, it is now effective to do measurements on an ongoing basis. Design blueprints specify what should exist, and sensors can record what does exist. The feedback loop between manufacturing output and scanning input resolves communication issues by using reality as a common index. The scans can be viewed with VR headsets now cheaply available.

So what happens to build progress reporting when pointing a camera is as accurate as a formal audit process? This is not a new innovation, but a linear progress of old concepts built on a bedrock of decades of development, and endorsed by standards – yet intensively applied at an economy of scale not previously possible. New processes can be built on a platform of ubiquitously cheap functionality.

Deloitte predicts that two-thirds of South Australian businesses will face a significant change to their business operations as a direct result of digital disruption over the next five years.

The ability to work within supply chains is based on agreed levels of reporting. Whole of project reporting has been polished to a disruptive art within companies like Walmart and Amazon. Each company has different processes for their needs and competitive strategy, and co-operation between companies involve the merging of their ways of doing things. To achieve a level of communication between groups within large projects also works as a
method for a community of smaller businesses to work together effectively.

This hasn’t happened yet because there has been no data format that can represent everything. Even the 3D model captured in the video above only shows what is there, not what each of the parts are. Maps of the world don’t capture all the information either, but they are important as an index. Everything has a latitude and longitude. 3D scans extends real world indexing to the everyday supply chain during manufacturing, similar to how mining have been using laser scanners for years.

Projects, especially large projects, need a clause in procurement contracts specifying ongoing reporting of development and build progress, regularly generated to the level of publicly comprehensible visualisations (apropos exclusion of sensitive information). That expectation is a driver for a manufacturing environment in South Australia that retains controlled transparency based on directly measured data. This kind of requirement creates
a mutual assurance policy for private and public ventures, reducing risk.

To paraphrase Sir Humphrey Appleby: “If it isn’t in the minutes, it didn’t happen”. And I’ll add: “If you can’t see it, it doesn’t exist”.

Basing structure on physical existence provides an index for all possible systems and it is the simplest common format that can be seen with your own eyes. This level of communication enables South Australia to manage the complexity of increasingly cost efficient projects of a larger scale, without audits subsequently revealing major issues which could have been addressed earlier and cheaper.

This is where Adelaide has an advantage – it is distinct enough to be its own space and small enough to co-ordinate in the same way as similar places in Scandinavia and Europe.

Norway is an interesting case – they put oil money into the Government Pension Fund, every citizen is a millionaire, and they’re now a country who can live off the interest of their capital. This is sometimes misreported as high unemployment, but this is the “abundance orientated economy” that is coming.

South Australia should seize the future before it is distributed elsewhere.

Stephen White is an engineer who works in large project recovery. He is a Monash University Distinguished Alumni for his work on the Jindalee Operational Radar Network – one of Australia’s most significant recent defence infrastructure projects.

He is a member of the Committee for Adelaide.