“You’d think nothing could survive out there on some of those days.”

I woke in a seven Richter hangover a few minutes ago, sweating. In the moments it took to realise it was the weather outside, and not entirely an internal problem, a wave of reassurance broke.  It wasn’t like 45C, like we had in January. This was lovely mellow warmth: exactly what this ridiculous vintage needs.

These last days have given us perfect gradual ripening weather, but the lovely gentle rain of the preceding weeks needed this breezy warm spell to dry things off.

It’s almost as if that opening line above from winemaker Tim Freeland related to 2009, which now seems like a dress rehearsal for this year. Both times, South Australia blistered in record heat which built for days before crossing the border to Victoria, setting it ablaze.

This last January there was one horrid week when my brother’s bushy suburb in the hills east of Perth burnt to the ground.  At the same time, another brother in Pinnaroo had scrub fires at three points of the compass, fortunately a respectable horizon away, but very discomfiting nevertheless.  My sister at Kanmantoo looked out her front door at the smoke of the big Rockleigh fire, and another brother sweated it out preparing for the worst at his place on the southern shoulder of Mount Remarkable, watching Bangor and Wirrabara explode around him.

There were more fires in the Onkaparinga Gorge across from where I live. There was little point in expecting sympathy from my kin – in comparison, the deadly Onkaparinga Hills ignitions were piffling.

Freeland’s comment came after that fiery blitz of record heat, and the record sousing which finished it.  He’d read the pre-emptory abuse I’d got on the chat lines even before I’d written that such weird conditions were hardly ideal for grape growers and wine lovers, and sent me a marvelling email, describing how his bush-vine Adelaide Plains fruit had survived quite well.

At the risk of further dissing 2014, let’s recap with some facts. We had two stupendous heatwaves. Adelaide was officially branded the hottest city in the world on January 16. We had five days in a row above 42C. From January 13 to 17, daily temperatures were 12C or more above the normal average. It hit 45.1C on the 14th.

Vines close down above 32-34C.  You can water them, but they don’t seem able to do much with that irrigation: they’re in a kind of hibernation, just sweating it out while their sugars soar towards the sort of jamminess which is increasingly unpopular in both winery and marketplace.

That vicious heat seemed the end of nearly everything to many growers, from Port Lincoln to Griffith.  Friends here on the Sellicks piedmont reported watching the wind blow famished bunches clean off the vines. 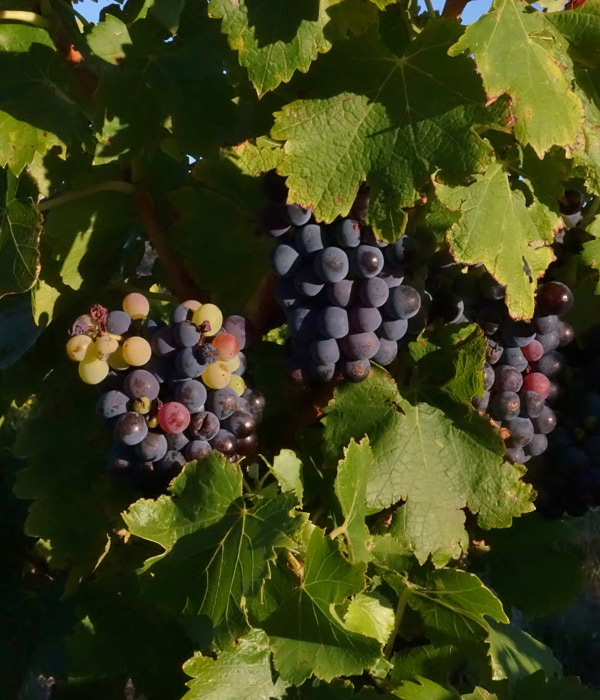 The first tricky bit of the 2014 crop came away back before Christmas, when the vines flowered and the tiny bunches began to form.  In some parts of McLaren Vale, like other vignobles, the flowering took an agonising six weeks. This leads to uneven berry formation: the phenomenon we call hen-and-chicken.  You get bunches with big ripe sugary berries alongside mean little green buggers the size of lentils, and all points in between.  This makes sweet-and-sour wine which demands unusual winemaking sophistry, and rarely gives ideal flavour.

When that heat hit us, the big berries went nuts with sugar, but because the vines had the dormant sulks, the green berries stayed put, presenting the winemakers with an even more sweet-and-sour extreme.

Everything changed when Huey suddenly chose to drown us in the wettest 24-hour period since 1969 – the fifth-wettest Adelaide day on record, when 75.2mm fell in the city and parts of the Ranges took 130mm and more.

While this sousing offered instant relief, as it continued the vines switched back on and those fat ripe berries sucked it up till they split.  When this occurs, sugary juice begins to ooze, adding to the bird-peck damage that many  growers already had. This is food for all sorts of moulds, like the botrytis that wrought havoc in too many vineyards in 2011.

Even if the ground is firm enough for spraying machinery, and there’s enough fungicide to go around, the growers then face the problem of leaving the sprayed fruit for 14 days for the chemicals to neutralise before they go into the tank with the wine. Those over-ripe berries get even riper.

“We started picking for Old Plains and Torzi Freeland International on Feb 9th,” Tim told me in that aforementioned missive, “directly after the heat on a cool Sunday morning. We’ve bought in 22 tonnes of Old Plains old-vine Shiraz, from four different vineyards at Penfield Gardens and Angle Vale.

“The old bastards gave us steady Baumés from 13 to 14,” he said. “They held up really well in the heat, tough old buggers: thick skin. They trucked through ferment, plenty of dark colour, aromatic, spice. Basket-pressed and barrelled down last Sunday. Just finishing off ferment in barrel …

“Even the Lenswood Pinot Gris looks okay at this stage. There’s no splitting, but the same grower has some split on other varieties that were more advanced.”

So. By that stage we had panicky growers getting less-than-ideal grapes off before anything else went wrong. Less fortunate ones, with borderline quality at the best of times, were facing the dread reality that there’d be no buyers for their crop.

But, as in 2011, the very lucky and the very smart sat it through. Those who’d managed their leaf canopies, ensuring there was good shade to stop the bunches stewing, but enough breeze space to dry out moulds and funguses, stood back in amazement.

The lovely pacifying cool of the last fortnight put these growers back on the profit map. The high sugars fell. Some folks were even beginning to worry that the grey cool was permanent, and those greener berries would never catch up.

Winemakers were facing the possibility of putting their casual vintage staff off for a week or two, as there was little for them to do until ripening finished.

So that warmth that set me sweating in hungover fear this morning is just perfect. Tickety-boo. Schmick.

If it had been like this since Christmas, we’d be looking at one of the best vintages ever. If it stays like this till the traditional ANZAC day rain, some may still lay claim to something along those ideal lines.

Only time will tell.

And yes, that hangover? Blame it on Dudley Brown, the Inkwell winemaker who was the chairman of the McLaren Vale Grape Wine and Tourism Association in the 2009 heatwave. Last night, in a tremendous bucolic splurge, he married his sweetheart, the formidable vine scientist Irina Santiago.

Today, they’re picking beautiful fruit with near-ideal vital statistics, if a little below the perfect tonnage.

“Whitey,” he said, “we might just be looking at a really good year. Trouble is, everyone’s so bloody punch-drunk after those waves of crap the weather sent us, that we’re not quite capable of realising it.”