Getting the band back together

Nick Minchin, the South Australian Liberal warhorse and former Howard Government minister, is getting ready to move to the city that never sleeps.

He will become Australia’s consul-general in New York after the Abbott Government hastily scotched Labor’s plans to send its man, former Victorian Premier Steve Bracks, to the plum post.

Is this the first step in a cunning plan to bring together Minchin and Alexander Downer in some sort of diplomatic dream team?

The word is that Downer, like Minchin a former Howard era minister, is a good chance to take the Ambassadorship in Washington, replacing former Labor leader Kim Beazley.

While the rest of us ponder the power and rewards of political mateship, Downer and Minchin will be looking forward to recreating, in more salubrious surrounds, their dinner of 23 May 1994 at the Vivaldi restaurant in Canberra.

That night, Downer, Minchin and their supporters toasted heartily and planned a glorious future in triumphant language, using well-rounded Adelaide vowels. It was the night that Downer unexpectedly won the leadership of the Opposition. And one of The Outsider’s very close informants was sitting at the adjacent table.

State Labor’s Google ad spend means that its Jay4SA message is being sprayed across cyberspace, including just about any Australian website that focuses on politics.

And this means Jay4SA ads are going where no Labor ad has previously dared to tread.

A quick survey shows His Jayness appearing on the very, very right wing website Menzies House (Cory Bernardi is their icon), the Australian Conservative website (next to a story pouring scorn on climate change and above a link to a Chris Kenny attack on the ABC) and even nestled among the retro-hysteria of StopGillardsCarbonTax.com.

Google, in its automated wisdom, even pushes Jay’s River Murray credentials at the bottom of the blog belonging to Lefty-baiter and close personal friend of Tony Abbott, Murdoch columnist Andrew Bolt. 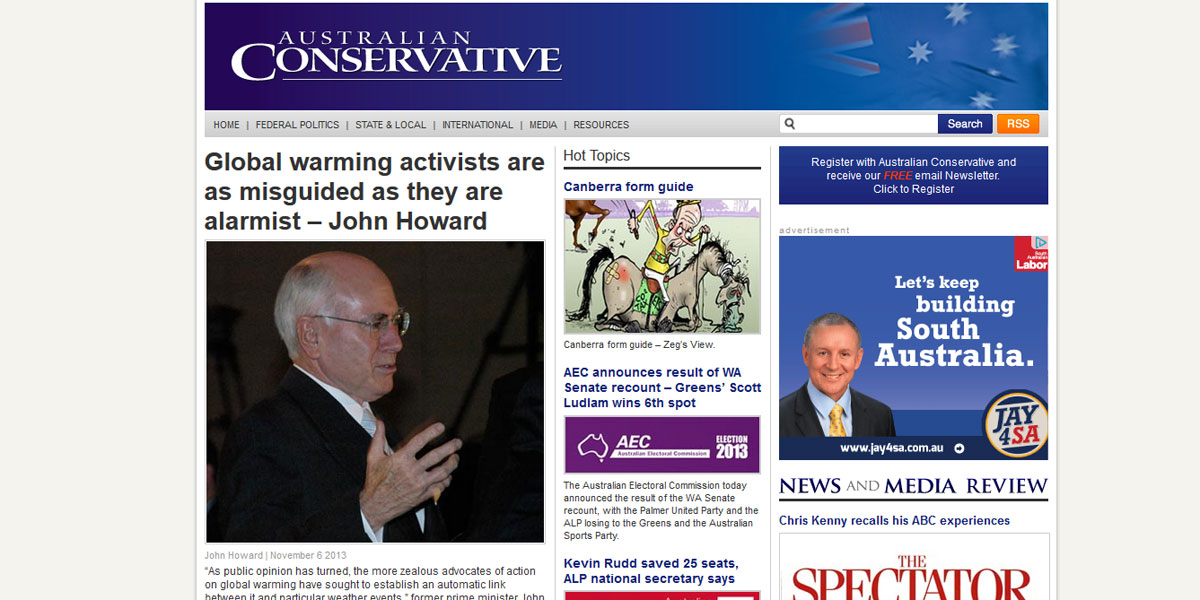 According to the Colton branch of the Liberal Party, Steven Marshall’s team has already won the election.

They’ve sent out the following note to supporters:

“Joe Barry is holding a Garden Party with South Australia’s next Premier Steven Marshall on the 2nd of March 2014.

“The event will be held in the electorate from 3pm-6pm.

This will be the final event for Joe’s campaign and it is important that we get as many people as possible to attend. We’d love to see you and all your friends there!”

Former radio announcer Bob Byrne has been doing some lovely work with a Facebook page about memories of Adelaide’s past – you know, John Martin’s, the ferris wheel on Cox Foys, the soap-box derby.

He joined Jeremy Cordeaux on FIVEaa evenings this week to kick over some more gentle, wonderful invocations of the past.

Awkward – and for good reason.

Byrne was suspended from Adelaide radio after a segment criticising Sprinkle – a Jewish-American performer whose explicit one-woman show shocked some locals in 1996 (put it this way, she used the pun “Public Cervix Announcement”).

Byrne, it seems to his eternal regret, had noted on air back then that there was one critic who’d know what to do with Sprinkle.

He then played a tape of Hitler.

We have some intriguing (and disturbing) stories about the ICAC’s inquiries that we’d love to tell you.