In calling a referendum on Britain’s membership in the European Union, Cameron made a gamble that sank his career – and set his country on a course to leave an international alliance it joined more than 40 years ago.

Speaking to assembled reporters outside his Downing Street office on Friday, he said he would stay on for as long as was necessary for stability’s sake, but that he could not be the one to lead Britain out of Europe.

“I will do everything I can as prime minister to steady the ship over the coming weeks and months, but I do not think it would be right for me to try to be the captain that steers the country to its next destination,” he said.

Brexit was a rare but fateful miscalculation for a politician who has a reputation for thriving under pressure and astutely judging political risks.

“I think he’s actually been pretty stunned by the strength of the ‘leave’ cause,” Cameron biographer James Hanning told The Associated Press several days ahead of the referendum.

“The golden rule is, never hold a referendum unless you’re confident of winning it, and I think he thought that the moderate voices would prevail by some distance.”

The referendum campaign was unexpectedly bitter and divisive, and was brought to a shocked halt when Labour MP Jo Cox was shot and stabbed to death in the street last week. The news appeared to dampen the momentum of the “leave” movement, but in the end the Brexit vote prevailed.

“The British people have made a decision to take a separate path,” Cameron said.

That decision was bitter news for Cameron, who called the referendum to puncture growing support for the anti-EU UK Independence Party and placate the strongly eurosceptic right wing of the Conservatives.

When he promised the referendum, in 2013, Cameron said it would “settle this European question in British politics” once and for all.

He told voters he would forge a new deal between Britain and the EU that would make remaining an attractive prospect.

At a Brussels summit in February, he won changes to welfare benefits that he said would reduce immigration and an exemption for Britain from the EU’s commitment to “ever-closer union” – a phrase that stirs images of a European super-state in some patriotic British hearts.

But many voters proved resistant to Cameron’s message that Britain is stronger, safer and more economically secure within the EU than it would be outside it.

The concessions he gained were dismissed as paltry by “leave” campaigners, who said they would do little to limit immigration from other EU nations because the bloc guarantees free movement among member states.

“I think he has underestimated the enduring nature and the strength of the eurosceptic support in the country and also the extent of the bitterness inside his own party,” Hanning said.

Meanwhile, Malcolm Turnbull appealed to voters to choose stability as he sought to weave Britain’s rejection of the European Union into the federal election campaign.

A week out from the poll, the prime minister seized on a 52-48 vote in the British referendum to leave the EU as a sign Australia needed a steady hand in a time of instability in global markets.

“A strong majority government, a strong economic plan – that is what Australia needs in these times of opportunity and uncertainty,” Turnbull told reporters in Devonport, Tasmania.

The stability of a coalition government versus the “chaos” of a Labor-Greens minority has been one of Turnbull’s mantras through the campaign, as polls show the major parties neck-and-neck.

He’s expected to reinforce the message at the coalition’s official launch in western Sydney on Sunday.

Shadow treasurer Chris Bowen said while the Brexit would echo around the world, “now is not the time for these impacts to be politicised or dramatised in a scare campaign”.

“What we need is a clear, calm and methodical approach through this situation,” Bowen said.

Labor leader Bill Shorten said Australia could withstand any fallout from a Brexit, just as the Rudd government saw the nation through the global financial crisis.

“The fundamentals of the Australian economy are solid,” he told reporters in Darwin.

“We cope with international events all the time.”

“People think `there is this global uncertainty, we don’t want a risk with how we vote, let’s go with the coalition, stick with what we know’,” he told ABC TV.

“It’s a slight positive for the prime minister.”

Keating acknowledged his government cut the company tax rate from 49 per cent to 33 per cent to boost economic growth.

But he said his policy was properly costed and funded, not a $50 billion “discretionary unfunded tax cut”.

Turnbull told reporters the government’s “very substantial savings” to cover the cost of the tax cuts came from cutting back high-end superannuation concessions.

Bowen said the super changes were not enough to cover the $50 billion cost. 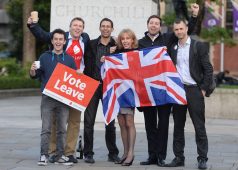 Shorten visited the NT to unveil priorities for the territory, including floodproofing roads, the national broadband network and a new business advisory council.

He also committed to overhauling temporary work visas to ensure Australian pay and conditions for visaholders and that the terms of visas were more strictly adhered to.

Turnbull committed $150 million to relocating and expanding the University of Tasmania’s northern campuses.