Making further contributions to superannuation can be a tax-effective strategy that boosts your funds for retirement.

However, you don’t have to be approaching retirement to be thinking about your superannuation balance.

Making additional contributions from early on in your career can have a significant impact due to the effects of compounding returns.

However, under current rules, if you are aged 65 years or over, you will need to satisfy a work test before contributing to super.

The superannuation fund will then issue confirmation that the contribution has been recorded as a concessional contribution and can be claimed as a tax deduction.

It is therefore important not to lodge your tax return or roll funds out of your superannuation fund prior to receiving confirmation that your ‘Notice of Intention to Claim a Tax Deduction’ Form has been lodged successfully.

Since July 1, 2018, individuals with a total superannuation balance of less than $500,000 have been able to carry forward their unused concessional cap space amounts. This enables people to make ‘catch-up’ superannuation contributions.

Individuals will be able to access their unused concessional contributions cap space on a rolling basis for a period of five years. Amounts that have not been used after five years will expire.

Tip: Be aware of how much you have already contributed for the financial year. Exceeding contribution caps can result in additional tax payable. 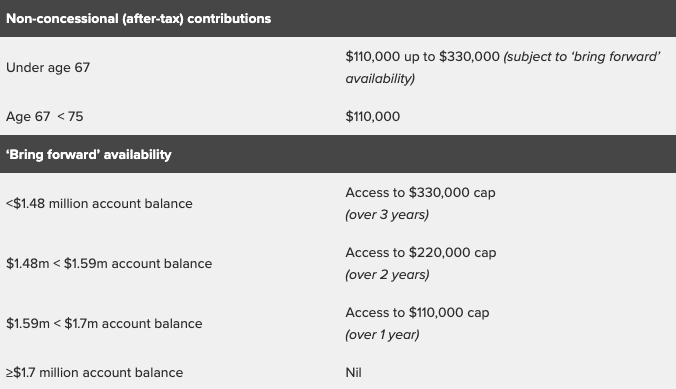 Contribution splitting allows you to split concessional contributions with your spouse, provided both of your superannuation funds permit this and you meet all necessary requirements (such as age and workforce status).

This can only be done after the end of the financial year and it is important that any intention to claim a deduction notice is submitted to the fund and confirmed before the contribution is split.

Often this can be done on the same paperwork. The maximum amount able to be transferred is 85 per cent of your concessional contribution (100 per cent – 15 per cent contribution tax).

It may also be advantageous to make contributions on behalf of your spouse. For example, you may be eligible to claim a tax offset of up to $540, where an after-tax contribution is made of at least $3,000 and the receiving spouse’s total income does not exceed $40,000.

With the end of the financial year fast approaching, please contact a BDO adviser if you would like to discuss your situation.

This article was first published at bdo.com.au on June 20. Read the original article here.