A lack of backpacker and other transient international labour has caused major issues finding farm workers across regional SA in the past 12 months from vineyards to fruit orchards and shearing sheds.

However, the shortage is beginning to gain traction with technology experts who are working with local producers to fast-track automation plans that aim to increase the use of robotic harvesting technologies as part of an emerging suite of AgTech solutions.

A group of about 20 AgTech experts from Adelaide headed to the Riverland late last month to meet with local producers and food companies about the issues facing the industry and what role technology could play in providing solutions.

BDO Australia’s AgTech Associate Director Michael Macolino helped organise the May 28 road trip along with Emma Leonard from AgriKnowHow and Oli Madgett, who is a member of the South Australian Government’s AgTech Advisory Group.

Macolino said building relationships to bridge the gap between tech developers, farmers and other end users would be crucial to the development of the AgTech industry in SA.

He said while he was pleasantly surprised by the early adoption of technology by a number of Riverland producers, the current labour shortage had created a surge of interest in automated harvesting solutions.

“Every farm that we went to said labour is a critical risk and a challenge they are trying to find solutions to from the way they monitor for pests and diseases, the way they manage the crop in terms of planting and applying fertilisers and they are all looking for automated harvesting solutions and robotics,” Macolino said.

“The cost of harvesting is significant and finding labour that can properly undertake the task of picking and identifying problems is a real challenge and they foresee that as being a challenge for at least the next couple of years.” 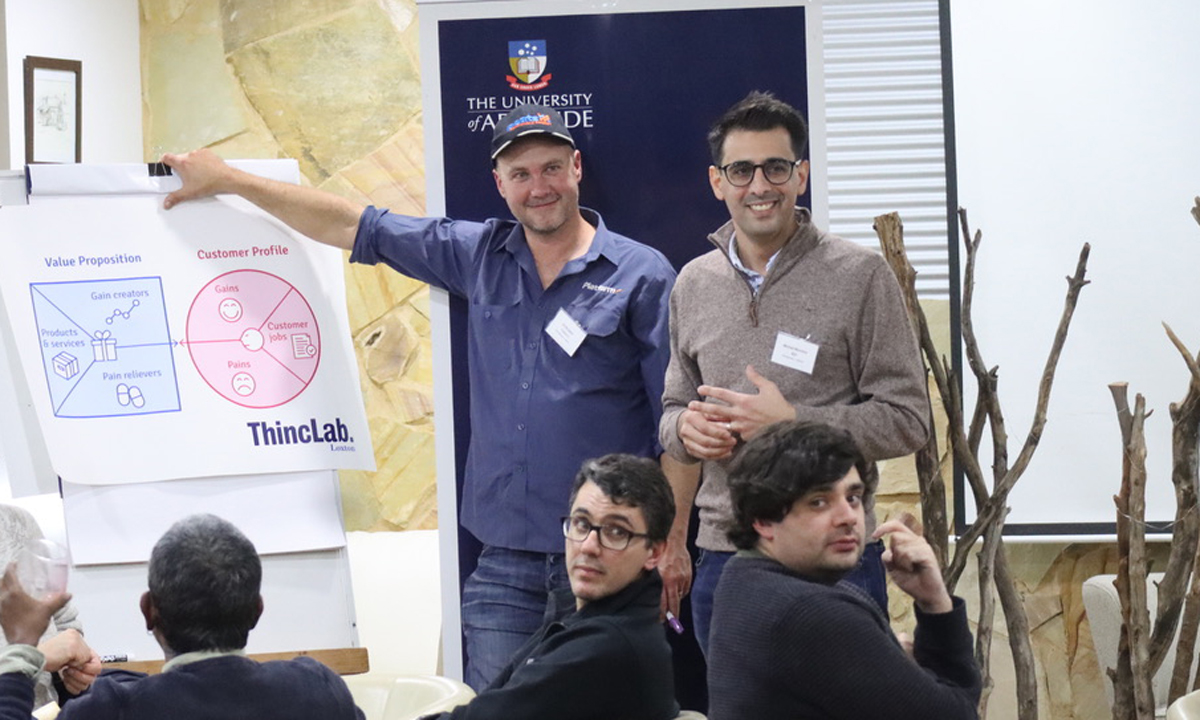 BDO’s Michael Macolino (standing right) was among about 20 AgTech experts who visited the Riverland last month.

Previously, automation advances in the agriculture sector had been driven by efficiency gains but the labour shortage has turned the need into one of addressing a supply problem rather than the desire for cost savings.

Macolino said automation had traditionally been driven by large-scale operators but smaller growers were now seeking to pool resources to access technology.

“There is a need to try and find ways to bring down the cost of some of this machinery or find ways for growers to collaborate so they can gain access to some of the technology that might be a bit more expensive,” he said.

“Citrus growers are considering how they can design new orchard plantings to allow the space for robots to get in and out and growing trees in such a way that is more two-dimensional rather than three-dimensional to allow the robot’s machine vision to identify, assess and pick fruit more easily.”

Agricultural technology has been identified as a key factor if Australia is to achieve the National Farmers’ Federation’s goal of $100 billion annual agriculture production in Australia by 2030 from the current level of about $63 billion.

The South Australian Government has also committed to making PIRSA Research Farms available to primary producers to showcase the opportunities available through AgTech.

The Loxton AgTech Demonstration Farm was established 12 months ago and is one of several demonstration farms set up by the state government to trial commercially available AgTech solutions in a controlled environment.

So far, three farms have been announced – the Struan and Kybybolite research farms in the state’s South East and the Loxton farm.

Macolino said while imported technology was available and in use on some properties, there was a need for technology to be specifically designed for Australian conditions so it could easily connect to a range of mobile, satellite and IOT networks.

He said beyond labour, water efficiency was among the other major opportunities for AgTech in South Australia, which has a long history of farm innovation in semi-arid zones.

“At the moment they are monitoring water use and yield across large areas of an orchard through sensors, satellite imagery and harvesting equipment, but are unable to get insightful data on small areas of the crop,” Macolino said.

“AgTech developers are working towards monitoring down to the tree level to optimise the application of water and nutrients.”

The group is planning a trip to AgTech demonstration farms in the South East later in the year.