The farms will also give the startups and AgTech innovators the chance to trial hi-tech products in a controlled environment ahead of commercialisation.

So far, three farms have been announced – the Struan and Kybybolite research farms in the state’s South East and the Loxton Research Farm and Centre, which was launched last month.

Agricultural technology has been identified as a key factor if Australia is to achieve the National Farmers’ Federation’s goal of $100 billion annual agriculture production in Australia by 2030 from the current level of about $63 billion.

BDO Adelaide AgTech Associate Director Michael Macolino said the lofty target could not be achieved simply by increasing farming efficiency and would require a range of new industries around the agri-food supply chain being established.

He said there was also an opportunity within AgTech for value-adding that previously wasn’t a large part of the industry.

“Traditionally a lot of these government research facilities have been quite closed off to the public but now they really want people to come out to the centres, engage with the researchers and see some of these technologies being used on farm,” Macolino said.

“One of the biggest barriers that AgTech has had in the past is that you’ve got these new solutions that get to a level just beyond the prototype but then there is this huge technical development gap before it can get to commercial scale and reliability in the field.

“The whole purpose of these demo farms is to enable early stage AgTech to be put it into a real environment that’s monitored within a strategic research and development framework, whilst also demonstrating how multiple technologies can integrate to create an end-to-end solution in a farming system.

“A producer in the area can come and see the technology in action at each stage of development, they can provide their feedback to the AgTech companies, shortening the early iteration cycle and informing the decision to go on to some more large scale development and manufacturing.”

Each of the farms specialise in specific areas of farming, such as livestock in the South East and citrus and viticulture at Loxton.

The farms have received 21 expressions of interest so far received from AgTech suppliers with 11 suppliers engaged.

“They are really trying to get everything from early stage startups through to more mature, commercially available technologies as well because that’s going to be part of the lure for these producers – coming to these farms and seeing a full range of technologies at an early stage all the way through to commercially available solutions,” Macolino said.

“The more technology they’ve got there at various stages, creates a multiplier effect where there may be opportunities for a number different technologies to collaborate and integrate to fill a lot of the technical challenges.

“That’s where the expression of interest process is important for getting as many of the broad range of technologies known to PIRSA and deployed on to the farms.”

Some AgTech products have been installed at the Struan and Kybybolite sites including a portable automatic in-paddock weighing machine that provides a hi-tech alternative to the process of physically mustering and weighing cattle one at a time.

More AgTech products are expected to be set up on the sites over the coming months.

However, he said timelines were being impacted due to COVID-19 travel restrictions.

“This calendar will be announced when it is safe to hold such events in line with the COVID-19 guidelines.”

The Kybybolite farm is about 20km northeast of Naracoorte while Struan is about 10km to the south of the South East farming hub.

The sites are part of a PIRSA-Elders partnership for the development of a Best Practice Demonstration Farm.

“Agriculture needs greater investment in AgTech, but not just any technology will do,” he said.

“Fundamentally, what really matters is how the development will address the key issues of productivity, profitability and sustainability.

“What agribusiness needs right now is tangible, on-the-ground initiatives that will benefit farmers and optimise the overall supply chain from a productivity and sustainability viewpoint – any innovation or idea must generate a distinct net benefit. 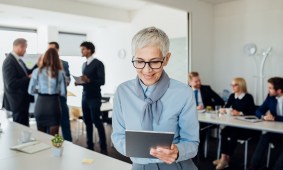 “This will be an important requirement for AgTech innovations at the Struan-Kybybolite demonstration farms, with the ultimate goal of improving productivity for South Australian primary producers.”

The state government last year announced a partnership with the University of Adelaide to give university scientists access to five state-owned research farms.

The university has established an incubator at the Loxton Research Sector to support AgTech startups as part of its ThincLab network.

Macolino, an Expert in Residence at ThincLab Waite, will help run a workshop at the Loxton ThincLab next month.

“What we’ve found particularly in AgTech is that a lot of farmers have engineered solutions to fix their own problems on the farm and then they start to do that early stage market investigation to see if it’s commercially viable,” he said.

“The ThincLab at Loxton is part of that process of giving opportunities to these regional entrepreneurs to get them involved in the innovation process, which they generally otherwise wouldn’t have access to.”