The BDO COVID Survey also found 87 per cent of respondents felt they and their colleagues had the resources to cope with the impact of COVID-19. This included the agility to accommodate flexible working arrangements and the ability of ICT teams to step up quickly to implement tools such as video conferencing capabilities and hardware upgrades.

The pulse survey conducted by BDO’s Industrial & Organisational Psychology Director Scott Way was undertaken online and by phone in early June. The survey’s purpose was to understand how BDO’s clients were responding to COVID-19 and how they intended to operate for the remainder of 2020.

Client organisations were drawn from private, public and not for profits and included aged care, manufacturing, retail businesses and government agencies mainly with 30+ staff.

The survey found 54 per cent of respondents expected their organisations to return to normal within three months while 18 per cent said they did not expect the ‘new normal’ to occur until next year.

Way said the positive response to COVID and the ability of organisations to respond quickly were standouts of the survey.

He said despite the positive results, people were still nervous about what the coming months would bring.

“It was encouraging that our Australian-ness kicked in with a pragmatic approach that said ‘let’s get on with it, now what do we need to do’,” Way said.

“But the uncertainty around when JobKeeper ends and the possibility of a second wave of illness could also lead to a second wave of unemployment so folks are much less confident about the future and far more wary and apprehensive so it is very much a case of watch this space”.

“Organisations are putting aside their strategic plans and saying we can only talk about the next three months and then focus on the three months after that to get through to Christmas.”

Way said he was impressed by the number of respondents that quickly implemented business continuity plans, which allowed them to react with certainty when restrictions were implemented in March.

He said organisations had reported that productivity had been maintained by staff working from home and in some cases increased.

“It was a bit like going over a speed bump where people didn’t initially know what to do but after a week or so working from home they got into a new routine.

“Those who had positive responses were saying ‘this is great, finally my employer has embraced working from home and now I don’t have a 40-minute commute so I’ve saved time’.

“Some of our clients still have a third to a half of their staff who are slow to return or don’t want to return to the office because they are saying ‘I have demonstrated I can do what I need to do from home and I’m hitting all my KPIs so why do I need to go back’?”

Way said respondents were happy with the productivity of staff working from home.

He said some staff relished the opportunity to reset their work-life balance.

“In some cases productivity rose – there seems to be greater productivity from people working from home because they are not being micro-managed and that extra freedom helped them deliver good productivity.

“A lot of this stuff has a bit of a double-edge though. Yes, there are fewer distractions at home but they miss some of those distractions such as the incidental water-cooler chat.

“Organisations try to compensate by having online sessions but one of the motivations for Australians going to work is to socialise.” 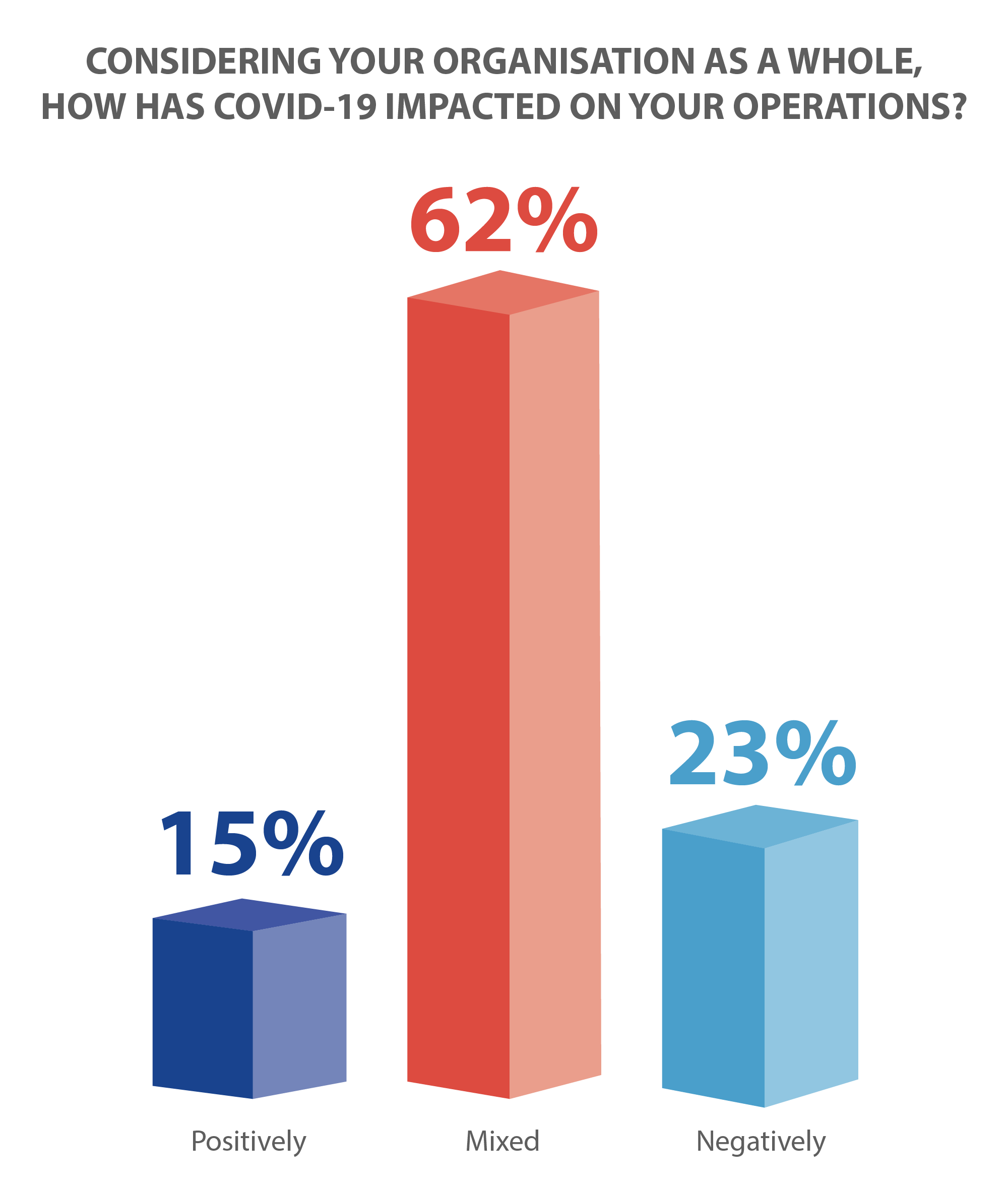 Way said companies were aware of potential issues with the mental health of staff during the lockdown and were proactive at addressing potential issues rather than having to react to things when people began to struggle.

While almost 90 per cent of respondents felt they and their colleagues had the resources to cope during the lockdown, Way said the 3 per cent who ‘strongly disagreed’ were angry about the inadequacy of their organisation’s response.

“It was only a small percentage but it was the sheer venom about the lack of organisation, technology not working, poor communication – they were cranky that’s for sure,” he said.

“Just as the positive stuff will stand those organisations in good stead, that 3 per cent have earnt no favours at all from their employer.”

The survey found that the operations of 23 per cent of organisations had been negatively impacted by COVID-19, 15 per cent had observed a positive impact and 62 per cent had experienced a mixed outcome.

“Some sectors are rebounding quite well and others quite slowly.

“The big take away is the back story of where to from here and our advice to organisations is to make sure you continue to plan for these different scenarios, don’t think that this (COVID-19) thing is over just yet.”