More than 20 Salvador Dali sculptures have been on display at the d’Arenberg Cube in the McLaren Vale wine region near Adelaide since March.

The success of the exhibition, including the sale of dozens of limited edition Dali sculptures, has prompted curator Christopher Talbot and d’Arenberg chief winemaker Chester Osborn to extend the show for a year until May 31, 2020.

“Art and wine together is not a new concept, we’re just taking it to a whole new level,” Talbot says.

“People come in and they’re mesmerised – they expect to see this in Paris or New York but not at a winery in McLaren Vale.”

The d’Arenberg Cube was inspired by Chester Osborn’s love of surrealism and also includes an Alternate Realities Museum, degustation restaurant and top floor wine tasting room. The Dali exhibition is on level 2 and fills the space used for private tastings and wine master classes since the $15 million building opened in December 2017.

“This building is fast becoming the most iconic destination you’ve got here,” Talbot says of the Cube.

“One of the reasons I choose non-traditional venues like the Cube is that here we play groovy music, you can have a glass of wine, we do presentations to explain the art and the comment we get the most is ‘what a surprise and how nice it is to come in and feel included’.”

The multi-million dollar Art Evolution.com exhibition is on loan from the Dalí Universe in Switzerland, whose Museum in Paris and public Dali exhibitions attract millions of attendees around the World.

The imposing multi-million dollar Dali “Nobility of Time” sculpture greets visitors to the Cube as they make their way towards the entrance. 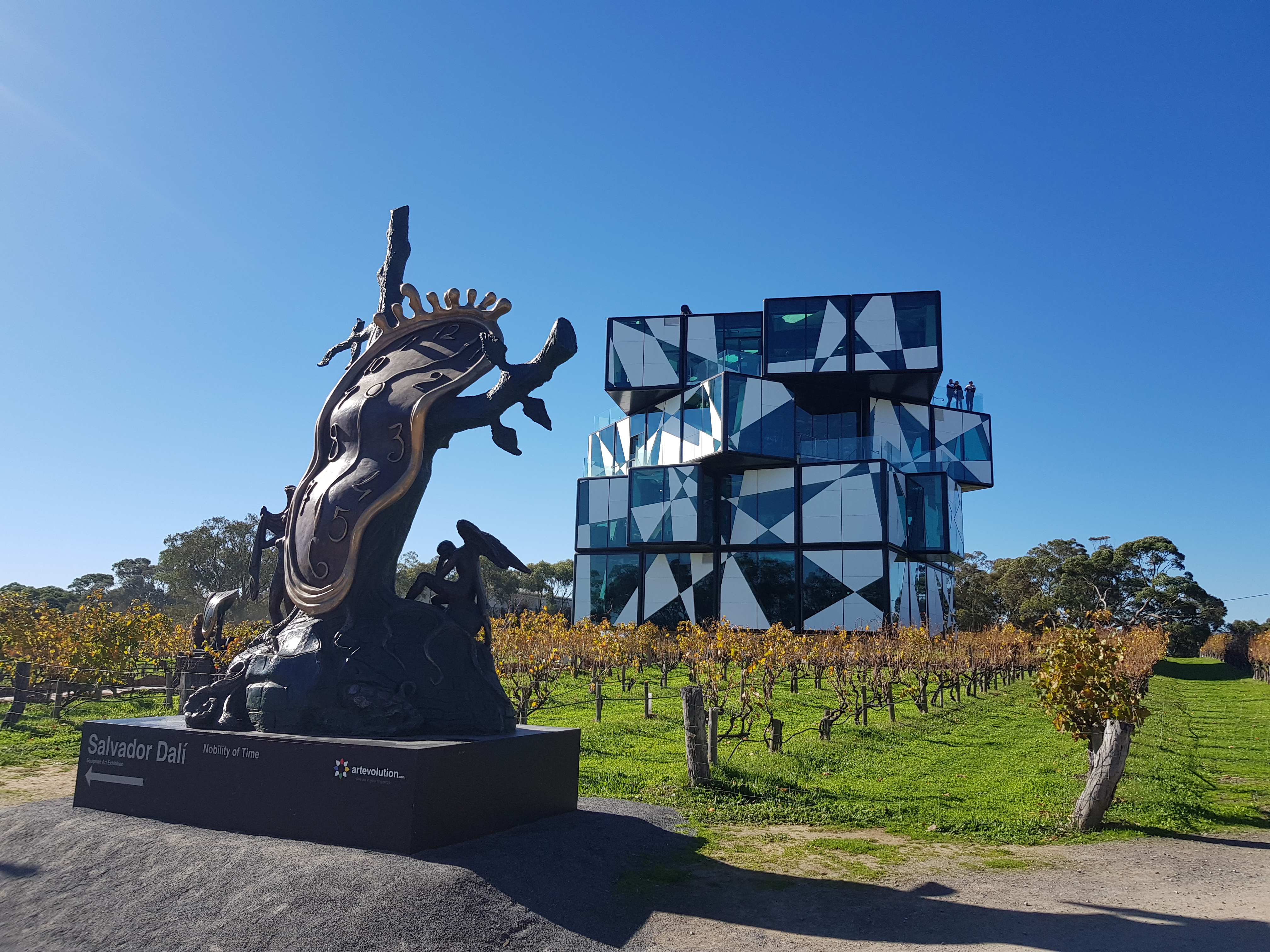 A 7-metre tall monumental original Salvador Dali “Triumphant Elephant”, valued at $2.6 million, will join the exhibition in October along with a giant bronze snail to bring the number of exhibited sculptures to 25.

Dali was born in Catalonia, Spain, in 1904 and died in 1989. He was known for his eccentric and grandiose behaviour as well as his surrealism across an expansive artistic repertoire including film, sculpture and most famously as a painter. He also undertook numerous commercial ventures that included designing the logo for the Spanish sweet, Chupa Chups in 1969.

The Dali Sculpture Collection came about when gallerist Benjamin Levi suggested to Dali in the 1970s that he consider making an entire collection of bronze artworks based on his most iconic imagery.

There are 29 designs in the collection that range in size from monumental to museum size and smaller pieces more suited to private collectors.

Talbot says the challenge of designing the models to be cast in bronze appealed to Dali as a way of ensuring his legacy lived on beyond the mainly individual pieces of art he had previously produced, which were selling at prices well beyond the financial capacity of most art collectors.

“Over a period of 10 years or so Dali had created directly or indirectly around 30 bronzes and no modern master had ever done that – it’s the single biggest collection ever put into production,” says Talbot.

“Dali and Levi thought generationally and understood that decades into the future collectors would still want to buy a Dali sculpture and this idea of immortality and legacy was something he could not get past – it was his obsession.”

“Dali thrived on controversy and he did some things which really upset the art establishment, instead of producing editions of 8 to 30 at very elitist prices, Dali authorized editions of 350 which could be sold at accessible prices, it was all about “inclusion” and not “exclusion”. One has to remember that this was in the time of “Andy Warhol” who was also breaking every rule under the sun, Warhol was also friends with Dali and had many interactions socially and artistically when Dali Lived in New York.

According to Talbot, whether good luck or good management it was also a major marketing and commercial coup and quite possibly one of the most successful art programs of the last 100 years and that certainly is surreal.

A few of the sculptures are sold out and others are approaching the 300 mark. It is a simple formula which is based on demand and limited quantity, as the edition reduces in number the selling price increases and once the limit is reached the moulds are broken so no more can be made.

Talbot says the 94cm-high Dali “Space Elephant” and “Space Venus”, both priced at $56,500 + GST are the most expensive pieces sold at the exhibition so far.

“About a third of the people coming through here have been coming to this floor and considering the Cube attracts up to 1500 people a day that’s a big number.”

The exhibition also features Dali graphics and original paintings by world renowned Australian surrealist Charles Billich, including his interpretation of the d’Arenberg Cube.

“This next 12 months isn’t just all about Dali, we are going to bring some world class artists and exhibitions to the space as well,” Talbot says.

Osborn and Talbot met in Sydney in February during the final days of its exhibition in The Rocks.

Osborn, known for his loud shirts and eclectic artistic tastes, says the combination of the d’Arenberg Cube and Salvador Dali had people talking in South Australia and interstate.

“Having a toy in the middle of a vineyard is surrealism and our own gallery is called the Alternate Realities Museum so it’s 100 per cent fitting that the Dali exhibition is here,” he says.

“There are still a lot of people out there who haven’t been to the Cube and who don’t know the exhibition is on so they will get an extra bonus when they come.”