The absorbent rubber polymer is made of waste cooking oil from fast-food outlets and sulphur – a by-product of the petroleum industry. It could be commercially available by the end of this year.

The international research team is headed up in South Australia by Flinders University’s Dr Justin Chalker.

The product is hydrophobic – meaning that it separates from water and binds well to oil. The polymer absorbs oil much like a sponge, forming a gel that can be scooped out of the water.

It is capable of absorbing two the three times its mass in oil or diesel and is reusable. The recovered oil can be squeezed from the polymer like water from a sponge and can also be reused.

“This is a new class of oil sorbent that is low-cost, scalable, and enables the efficient removal and recovery of oil from water,” said Dr Chalker, senior lecturer in Synthetic Chemistry at Flinders University.

“This application can consume excess waste sulphur that is stockpiled around the globe and may help mitigate the perennial problem of oil spills in aquatic environments.”

The team originally developed the polymer to capture mercury pollution from soil, water and air at mine sites and industrial plants.

It is currently being used in a program in Colombia to remove mercury from rivers contaminated by gold mining.

The researchers are hoping to scale up production of the polymer in South Australia and are looking for funding and engineering support to advance the project.

Dr Chalker, pictured below, said the product could be available commercially as early as this year, depending on the success of field trials and the level of support and collaboration from industry partners.

He said the waste canola oil from food outlets and sulphur were cheap and widely available.

“Just making a product from waste, regardless of what the end use, is a viable thing to think about. In this case, we’re converting waste into something that can help clean up the environment,” Dr Chalker said.

“We hope that our material will play a role in remediation and that’s the hallmark of impact.”

The International Tanker Owners Federation (ITOPF) estimated that 7000 tonnes of crude oil spilled from tankers into oceans in 2017. The environmental consequences of oil spills can be disastrous. The explosion on the Deepwater Horizon offshore drilling rig in 2010 spilled about 4.9 million barrels of crude oil into the Gulf of Mexico.

Unlike the sorbents currently in use, the porous polymer, below, does not absorb water, is buoyant and is made entirely of waste products. 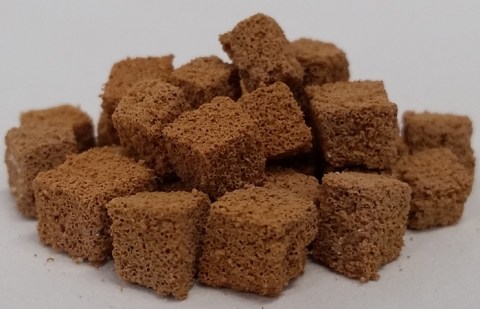 The product is being rolled out in a pilot program in conjunction with partner organisations in Australia and abroad. Commercial trials are in progress for the oil spill and mercury applications.