The fascinating story of a seafaring cat by the name of Trim is based on the famous British naval explorer Flinders’ own biographical tribute to his life companion Trim, a hardy feline who is reported to have learnt to swim and have no dread of water during his many voyage escapades.

To mark Matthew Flinders birthday (16 March), Flinders University humanities researcher Dr Gillian Dooley has prepared this special report on Trim, based on her research into the Biographical Tribute to the Memory of Trim and other materials stored at the National Maritime Museum in Greenwich, London.

In January 1807 Matthew Flinders was on Mauritius (then called Ile de France), where he had already been detained by the French for more than three years.

Although he was frustrated and longed to get home to England, he kept himself busy.

He wrote in his journal: “When not otherwise occupied, I have lately employed myself … in translating into French the history of my cat Trim, which I wrote out for the purpose”.

Was the ‘history’ Flinders wrote in January 1807 The Biographical Tribute to the Memory of Trim? 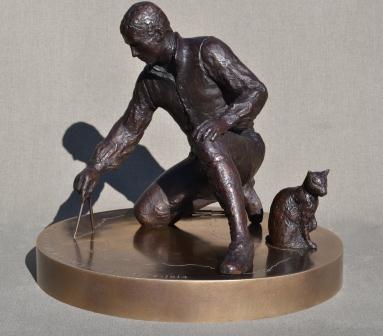 The bronze statue of world navigator Matthew Flinders and his cat Trim created for Flinders’ burial site in London and for the 50th anniversary of Flinders University in South Australia.

On the surviving manuscript, he added ‘Isle de France 1809’ to the title. Maybe what he wrote in 1807 was a simpler version that he elaborated over the next two or three years. In any case, what we have is far from a simple ‘history’.

There can’t be many cats in history who have been described in such affectionate detail.

Luckily the manuscript of Trim survived among Matthew’s papers, to be discovered in 1971 by Australian writer Stephen Murray-Smith.

It has been published several times since then and Trim now has his share of portraits and statues and it seems hardly proper nowadays to depict Flinders without his faithful Trim somewhere nearby.

But outside this manuscript, what do we know about ‘the real’ Trim?

In all the 235,000 words of Flinders’ private journal, he only mentioned him that one time, to say he was ‘writing out’ his ‘history’.

He didn’t figure in the journal during the dark days when, according to the Tribute, ‘confined in a room with his master and another officer, … he contributed by his gay humour to soften our straight captivity’.

Flinders’ letters give us a few more hints. He mentioned Trim twice in letters to his wife Ann. Ann would have known Trim from her short and ill-fated sojourn on board the Investigator between her marriage to Matthew on 17 April 1801, and the middle of June that year, when she was sent back to her family, banished from the voyage.

Matthew Flinders wrote news of him from Sydney in June 1803 as one among several shipmates: ‘Trim, like his master is becoming grey; he is at present fat and frisky, and takes meat from ones forks with his former dexterity: he is commonly my bedfellow.”

Artist George Gordon McCrae (1833-1927) drew ‘seafurrer’ Trim crashing through a glass window, after the cat born and bred at sea encountered glass in a conventional house window for the first time.

In November 1804, Flinders wrote to Ann again, this time from the ‘Garden Prison’ in Mauritius. At the end of a long, passionate letter, he added a teasing paragraph directed towards ‘that idle thing, Belle’ – Ann’s teenage half-sister Isabella Tyler.

‘Does she think I will bring her any pretty feathers or little fishes when she has not written me one line for these live-long three years last past?’

He catalogued a whole lot of presents that Isabella wouldn’t get, and one of them was ‘a set of Trims finger nails which he shed in the Gulph of Carpentaria.’

Trim is mentioned in one more letter.

This one was to Governor Philip Gidley King, written in September 1803 at sea in the tiny schooner Cumberland, which Matthew had decided to sail all the way to England even though nobody had ever been so far in such a small vessel.

He didn’t make it – he stopped at the French colony of Ile de France (Mauritius) to repair the ship, and he, Trim and the rest of the dozen crew were taken prisoner by the French.

And unfortunately after a couple of years, Trim went missing. Nobody knows what happened to him, though Flinders thought he might have ended up in a cooking pot!

But when Flinders wrote to Governor King, he didn’t know what awaited him and he was in a jovial mood.

He wrote, ‘of all the filthy little things I ever saw, this schooner, for bugs, lice, fleas, weavels, mosquitos, cockroaches large and small, and mice, rises superior to them all.’

He described the measures they were taking against the various insects, with the ‘bugs’ being the most persistent: he suggested that ‘before this vile bug-like smell will leave me, [I] must, I believe, as well as my clothes, undergo a good boiling in the large kettle.’

The rodents, however, were easily dealt with: ‘I shall set my old friend Trim to work upon the mice.’ He knew he could rely on his ‘faithful, intelligent … sporting, affectionate and useful’ feline friend.

Through all his trials and tribulations, Matthew was always dreaming about retiring to the English countryside to live quietly with Ann.

And, ‘if ever he shall have the happiness to enjoy repose in his native country’, there would be a place for Trim: ‘under a thatched cottage surrounded by half an acre of land … in a retired corner, a monument to perpetuate thy memory and record thy uncommon merits.’

Sadly that never happened. But Trim’s memory has now been restored and perpetuated until he is one of history’s most famous cats.

His ‘affectionate master and friend’ did him proud.

At the same time, as Murray-Smith writes, Trim ‘tells us as much about [Flinders’] personality and humanity as, perhaps, the rest of his published work does in total.’

In writing this loving, witty, moving tribute to Trim, he revealed a side of himself that we wouldn’t otherwise suspect had ever existed.

Gillian Dooley is an Honorary Senior Research Fellow in English at Flinders University. She is founding general editor of the Flinders Institute for Research in the Humanities electronic journal Transnational Literature and founding co-editor of Writers in Conversation. Dr Dooley’s research interests include the writers J.M. Coetzee, Iris Murdoch, V.S. Naipaul, Jane Austen, and maritime explorer Matthew Flinders – Flinders University’s namesake. She is currently working on a new, authoritative edition of Flinders’ ‘Biographical Tribute to the Memory of Trim’, with co-editor Philippa Sandall, the author of Seafurrers