On an episode of Q&A, audience member Diana Melham, who is executive director of the Sporting Shooters Association of Australia NSW branch, challenged former deputy prime minister Tim Fischer on the effectiveness of the gun buybacks he helped usher in as part of the Howard government’s sweeping gun reforms following the Port Arthur massacre in 1996.

Melham said “research shows” the government-funded gun buybacks in 1996 and 2003 have had “no effect in reducing the number of firearms deaths”. Fischer responded that a “fair take” on the statistics would show there has been a reduction in gun deaths since the reforms were introduced and the buybacks took place.

So, what does the research show?

Q&A AUDIENCE MEMBER: The government-funded buybacks in 1996 and 2003 cost $700 million. However, research shows these have had no effect in reducing the number of firearm deaths.

TIM FISCHER: Look, the statistics can be looked at as lies, damned lies and statistics, but a fair take on those stats, I think, would lead the average Australian to believe, correctly, there has been a reduction in gun deaths in this country since John Howard spearheaded the firearm agreement between the federal government and the state governments since the legislation passed, since the buyback took place.

When asked for sources to support his response, Tim Fischer referred The Conversation to research published by Christine Neill and Andrew Leigh in 2008 and 2010. Fischer also pointed to an Atlantic article, saying it affirmed his claim that “you are 15 times more likely to be shot dead in the USA than Australia on a proven per capita basis”.

Diana Melham provided The Conversation with a response on behalf of the Sporting Shooters Association of Australia (NSW), and quoted a study by Wang-Sheng Lee and Sandy Suardi, who concluded the National Firearms Agreement “did not have any large effects on reducing firearm homicide or suicide rates”.

Melham also referred to Australian Bureau of Statistics data and an Australian Institute of Health and Welfare report. You can read her full response here.

Tim Fischer was correct when he said there has been “a reduction in gun deaths in this country” since the Howard government introduced stricter gun laws in 1996, and since the 1996 and 2003 gun buybacks took place.

Does research show that the 1996 and 2003 gun buybacks had “no effect” on that reduction in firearm deaths, as Diana Melham said? First of all, it’s not possible to disentangle any effect of the gun buybacks from the rest of the gun reforms introduced at the same time.

What we can say with certainty is that in the 15 years prior to the first gun buyback in 1996, there had been 13 mass shootings in Australia. In the 21 years since more restrictive firearm policies came into effect, there has not been a single mass shooting in the country.

Between 1981 and 1996, there were 13 mass shooting incidents in Australia in which a total of 104 people were killed and 52 injured. This culminated in the 1996 massacre in Port Arthur, Tasmania, where 35 people were killed.

The 1996 National Firearms Agreement covered a raft of measures, including:

The agreement also included a national gun buyback scheme, which saw the surrender of more than 640,000 firearms, mainly rifles and shotguns.

In 2002, more national reforms were introduced, this time focused on controlling illegal trade in firearms and restricting the use of handguns. In 2003, another national handgun buyback scheme was instituted.

According to this parliamentary source, the 1996 and 2003 gun buyback schemes cost taxpayers just under $628 million, somewhat less than the $700 million Melham quoted.

So, what does research show about the effectiveness of the reforms?

First of all, let’s look at Australian Bureau of Statistics data on changes in annual firearm death rates, both before and after the 1996 reforms were introduced. 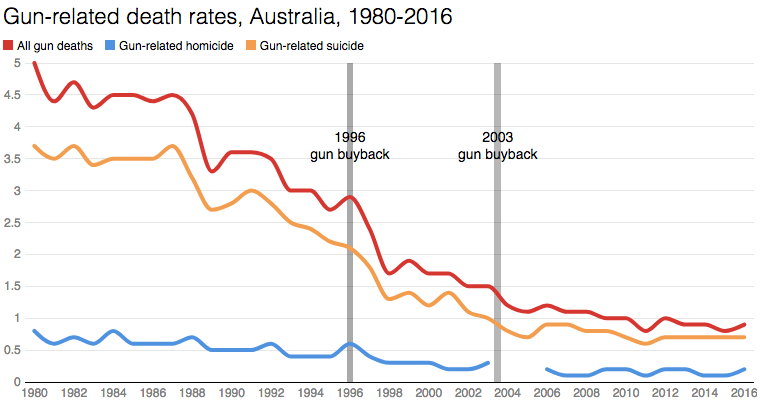 Age-standardised death rates on a per 100,000 population basis, using estimated mid-year population. Age-standardised death rates based on a death count of fewer than 20 have not been published. This is represented by a break in the line for gun related homicide rates. ‘All gun deaths’ includes suicide, homicide, accidental death and ‘undetermined intent’. In these data, guns include handguns, rifles, shotguns and larger firearms, including unspecified firearms. Source: Australian Bureau of Statistics

So it’s true that gun deaths reduced following the 1996 and 2003 firearm reforms and gun buybacks, as Fischer said.

But we can also see that firearm death rates began falling before the reforms and buybacks took place, as Melham said. Australian Bureau of Statistics data show that the annual rate of gun deaths fell from 5 per 100,000 in 1980 to 2.7 per 100,000 in 1995.

So it’s hard to tell from these data alone what effect the gun buyback schemes and tighter restrictions on firearms had on this decline.

A number of academic papers have asked whether the rates of firearm related deaths decreased more rapidly after Port Arthur than they were decreasing beforehand.

The authors of this study published in 2010 used “structural break tests” to examine whether there were points in time where the downward trends in firearm related death rates suddenly accelerated. They concluded that there was “little evidence to suggest that [the National Firearms Agreement] had any significant effects on firearm homicides and suicides”.

A 2006 paper found that firearm related suicide rates from 1997 to 2004 were lower than predicted by the trends in previous years. This would suggest that the firearm legislation and buybacks may have reduced firearm suicide rates.

Firearm related homicides remained in line with the trends from before the 1996 reforms.

A 2016 analysis found that rates of firearm related homicides and suicides “declined more rapidly” between 1997 and 2013 compared with before 1997. But there was also a decline in non firearm suicide and homicide deaths during that time of a greater magnitude. Because of this, the authors said it wasn’t possible to determine whether the change in firearm deaths could be attributed to the gun law reforms. 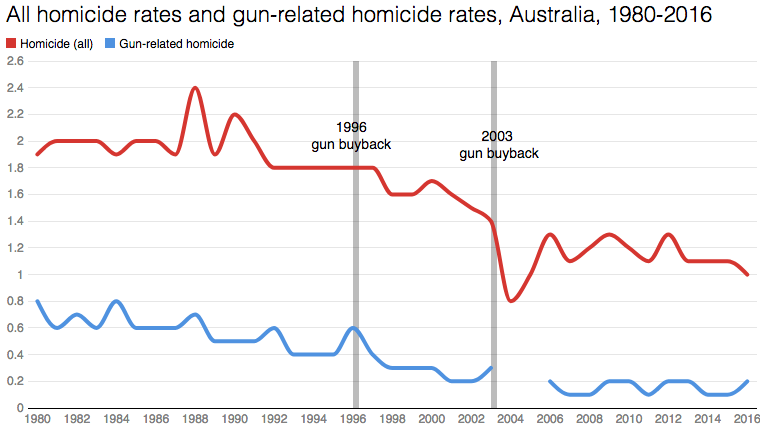 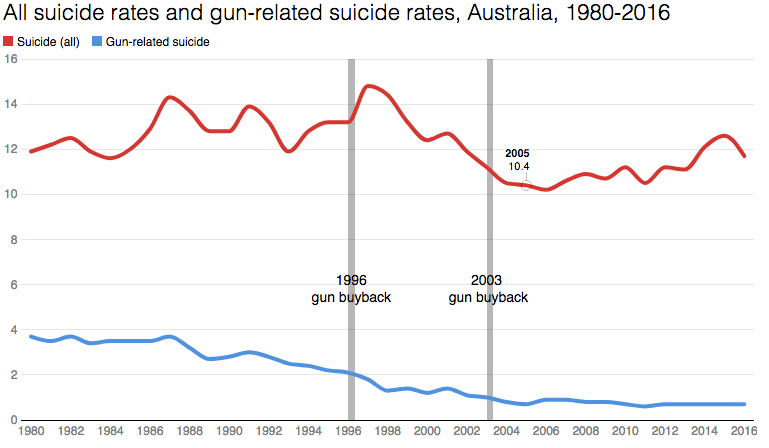 In Victoria, firearm reforms were introduced in 1988, eight years earlier than the rest of the country, following two mass shootings in the state. The reforms tightened restrictions on semiautomatic longarms, but did not include a gun buyback.

The authors concluded that “dramatic reductions in overall firearm related deaths and particularly suicides by firearms were achieved in the context of the implementation of strong regulatory reform”.

There were also differences between states in the number of guns handed in during the 1996 buyback. Tasmanian residents handed back guns at the highest rate.

The study found a “statistically significant decline in firearm deaths in states with higher firearm buyback rates”. There was a similar effect for firearm homicide rates, though this was less robust due to the small number of firearm homicide deaths to begin with.

However, the authors acknowledged it was hard to work out which aspect of the National Firearms Agreement was most effective, and that the results should be interpreted as a reflection of the combination of the gun buybacks and stricter regulations, not one or the other.

FactCheck experts for The Conversation agree.

“It’s clear that the gun buybacks in 1996 and 2003 and related firearm restrictions were followed by decreases in overall gun deaths, including firearm related homicides and suicides,” says Associate Professor in Criminology, David Bright, from the Flinders Centre for Crime Policy and Research.

“What’s less clear is the cause of these decreases.

“The difficulty is that there’s no alternative universe in which the buyback and restrictions didn’t take place. So it’s impossible to rule out the possibility that reductions in gun deaths were caused by factors unrelated to the buyback schemes and more restrictive firearm policies.”

Associate Professor Bright says some peer reviewed studies have found that the gun buybacks and stricter regulations led to a decline in the number of gun related deaths – and suicides in particular.

“Some studies found the National Firearms Agreement overall had modest effects, while other studies were inconclusive.

“What is not in dispute is that in the 15 years prior to 1996, there had been 13 mass shootings in Australia, in which a total of 104 people were killed and 52 were injured.

“In the 21 years since more restrictive firearm policies came into effect in Australia, there has not been a single mass shooting in the country.

Both Terry Goldsworthy, Assistant Professor in Criminology at Bond University, and Don Weatherburn, Director of the NSW Bureau of Crime Statistics and Research, agree with the verdict of this Fact Check.

“The author has correctly highlighted that since the introduction of tough gun laws and firearm buybacks in Australia, we have not suffered a mass shooting of the likes of Port Arthur. This is in contrast to the US, where mass shootings have been increasing over time,” says Professor Goldsworthy, who adds no one cause can be attributed to the decline in gun related deaths in Australia.