Marginal seats have long been gifted with political largesse, particularly at election time, but the importance of the Government’s four most marginal electorates – Adelaide, Elder, King and Newland – is underlined by a massive spending focus from both parties.

Voters in these seats are specifically targeted through their mailbox and online with tailored messages about projects in their neighbourhood backyard.

But while few individually have significant pricetags, the overall cost to taxpayers as parties chase a parliamentary majority adds up to tens of millions of dollars.

“It’s been totally pork-barrelled… every sporting club in this area has been given something,” says Bedford, who is contesting Newland after a significant chunk of her Florey electorate was shifted there in a boundary redistribution.

“If you go down to Pooraka or Ingle Farm (in neighbouring Florey and Playford), they’ve got nothing.”

She said the practice of major parties targeting spending in key seats was “like the Ros Kelly whiteboard stuff” –  a reference to a Keating-era federal scandal in which sporting grants were doled out on the basis of a rudimentary whiteboard assessment.

“It’s been going on forever,” she says.

“If I can hang on, we want to make that we can look at the whole north-east precinct… there has to be some sort of system.

“If you look at the toilets of [facilities in] Pooraka and Ingle Farm, it’s not on the same planet.”

In keeping with the tenor of the macro-level election campaign, Labor’s spending commitments in the four most marginal Liberal seats outweigh the Government’s by more than two to one.

But Treasurer Rob Lucas says that’s partly because the Government has already been spending money on projects, not just in key seats but across the board.

“There’s a whole series of things we’ve been doing over the past four years in a lot of areas, which would have particular significance in those local communities,” he said.

Lucas says the Marshall Government pledges in key seats are included in the costings he released on Monday – albeit tucked away in general-allocation funds, likely including Sundry Sport and Recreation Grants ($19 million), Sundry Education Department Grants ($13 million), Sundry Planning and Development Grants ($840,000) and “other projects” ($11.4 million).

He argues that money for projects including $4.5 million for the Ceduna Area School counter claims of pork-barrelling in the marginal seats – though he concedes “those four [electorates] would obviously, on both sides of politics, be in the upper echelons” in terms of spending.

“But there are probably some other seats which would have one-off projects,” he adds.

Mullighan insists Labor will account for any spending commitment – however small – when it releases its full costings tomorrow, saying the Opposition has no line of sight as to how much money in the grants funds remains uncommitted.

“So everything that we’ve committed in the campaign -whether it’s a few hundred grand for a local bowling club through to the health stuff and hydrogen jobs plan – is included in our costings as something we’re going to pay for,” he says.

“We’re not only accounting for the cost of the major things that Peter [Malinauskas] has been holding press conferences on – everything is included in our costings.

“There’s no skirting around that or trying to bury it or not account for it.”

But he too insists money is being committed in seats across the board, “whether Labor-held, Liberal-held, safe or marginal”.

“If a political party was clearly focussing its spending only in the four marginal seats, you’re open to that allegation [of pork-barrelling] but we’re comfortable we’ve been making commitments right across the board in Labor, Liberal and independent seats, and regardless of margin,” he says.

“I don’t think we can be accused of pork barrelling – we’re committing significant funds to seats we’re not targeting [and] that’s what exonerates us from the claim that we’re pork-barrelling.

“We’ve been very conscious of the risk of that allegation, which is why we’ve been careful to make sure we’re making commitments in seats across the board and the state, regardless of which party holds them or what the margin is.”

In north-east King, first-term Liberal Paula Luethen says “most of the people in the electorate have been delivered a picture of what [the next four years] looks like” under a re-elected Liberal Government.

“It’s very strong – improvements to our health system, more jobs in SA, lots of outcomes that give everyone a reason to stay in SA,” she says.

But at the local level, her corflutes are spruiking “improvement to safety and the congestion we have on The Grove Way”, a major arterial road in the electorate.

“That’s something the whole community got behind and supported me and we’ve been successful, announcing a $200,000 planning study to get engineers to have a really good look at how we address the congestion and safety concerns we have there,” she said.

“Certainly, I promised to work really hard to get that planning study, and we’re delivering on that.”

Elder MP Carolyn Power says she’s been “working really hard, door-knocking all the way through” the electorate – which appears to be the beneficiary of the most financial largesse from both parties, with more than $12 million on the table from Labor and almost $9 million from the Liberals.

“In terms of the strategy overall, my focus is just on the people I represent,” she says.

“I’ve been working with a number of my local primary schools, the principals, the governing councils, the parents – and we’ve made some pledges about improving, for example, Edwardstown Primary School, a $3 million investment there in building flexible modern classrooms which is a really big priority for the school.”

She said she had been “working with the parents and an incredible principal at Westbourne Park Primary, and we’ve pledged some funds to be able to build a nature play [area] as well as upgrade some of their toilet facilities”.

“Not too far from there we’ve got Colonel Light Gardens [primary school] where we’re going to be investing money to enhance that school with STEM learning facilities – so lots of great things happening,” she says. 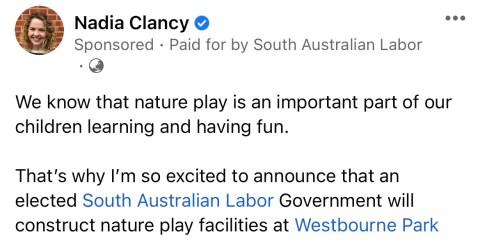 Power also cites the Liberals’ previous commitment to reopen and revive the Labor-shuttered Repat Hospital as “something people in my local community really care about”.

Asked if the school commitments were dependent on the Government’s survival, she said: “In terms of our commitments to the local primary schools in my area, they are commitments that a re-elected Marshall Liberal Government will deliver on.”

But Labor has matched many of those commitments, with Lucas arguing that “in a couple of cases they’ve actually just said ‘me too’.”

He cites the Edwardstown school project.

“That wasn’t a Labor commitment, but the Labor candidate – within 20 minutes I think it was – contacted the school and said ‘we’ll match the commitment’,” he said.

Nonetheless, he insists delivering any marginal seat pledges was “entirely a decision for an incoming government”.

“It’s not as if we’ve actually signed a contract for someone to build it,” he said.

After Labor provided a list of its commitments in the four key marginals, the Liberals initially provided a link to its campaign hub website, where it said all local pledges were searchable by postcode.

However, a more detailed list was provided after InDaily pointed out that key commitments that have been spruiked locally during the campaign, such as to Westbourne Park Primary School, did not appear to be included on the site.

The list provided for the Adelaide electorate also initially included the $25 million committed towards a new Aquatic Centre, for which Labor has pledged $80 million to fund the entire project.

WHERE YOUR MONEY IS BEING SPENT: