Several insiders say Penny Pratt, a longtime Liberal staffer who previously worked for Steven Marshall until he won government, is a likely frontrunner given the influence of the moderate-dominated state executive in the ballot to be held on Saturday week.

Each member of the executive gets a vote in addition to members of the local sub-branch, which could give Pratt around 10 votes in a ballot that may be decided by as few as 80 voters, depending on how many sub-branch members take part.

Pratt, whose father Michael is a former federal MP for Adelaide, has told electors in the preselection ballot she lives in the Clare Valley while working in Adelaide. She did not respond to questions today about how long she has lived in the region and whether she commutes to the city each day.

The Frome nomination is proving one of the more divisive in the current round of Liberal preselections, with six hopefuls vying for endorsement as the party’s candidate in the nominal safe seat, which will fall vacant as its longtime incumbent, independent Geoff Brock, shifts to neighbouring Stuart to take on Energy Minister Dan van Holst Pellekaan.

The party division is evident from an array of endorsements given to another prominent nominee, accountant and former Liberal Party treasurer Michael van Dissel, who hails from the party’s Right faction but is considered among a number of prominent conservatives who have repositioned themselves as the “sensible centre” in the past year.

Van Dissel’s campaign material features an endorsement from moderate powerbroker and SA senator Anne Ruston, who asserts that he has “always energetically and passionately championed our Liberal values and ideals”.

“He cares deeply about our state, its people and economy and has always been a tireless advocate for all South Australians whether they live in the city or the regions,” the federal minister for Families and Social Services continues.

Ruston’s endorsement, which sits alongside other references from the likes of Right luminaries Nick Minchin, David Fawcett and former Victorian Treasurer Alan Stockdale, has raised eyebrows in party circles.

Others to offer support were maverick state Liberal Nick McBride and centre-right MPs Steve Murray and Dan Cregan, the latter of whom was pictured with van Dissel in university days apparently exchanging barbs with anti-Howard Government protesters, including David Pearson – later a senior advisor in the Weatherill Labor Government – and now-United Workers Union boss Demi Pnevmatikos. 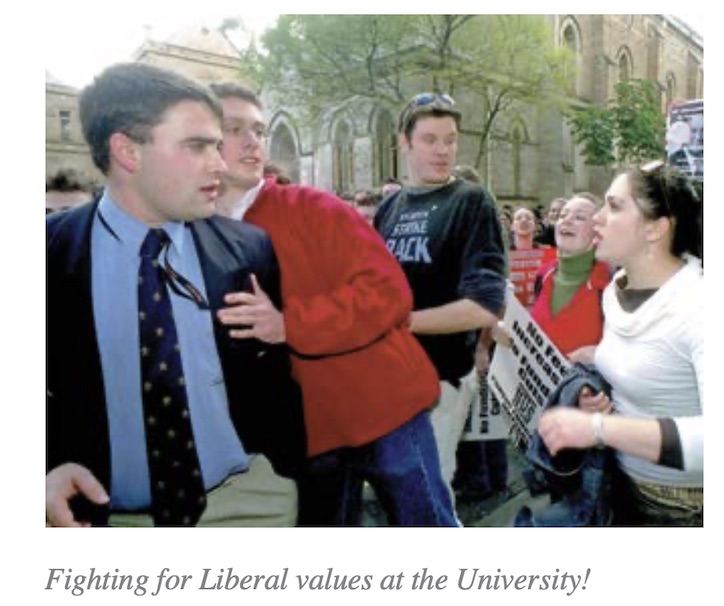 That’s despite hard Right figures such as Tony Pasin and Alex Antic believed to be backing another candidate, local real estate agent Craig Honan, whose daughter is understood to work in Antic’s office.

Van Dissel’s uncle Max was a former candidate for Frome under the Liberal-backed Save the RAH banner in 2010 and narrowly lost a bid for the state Liberal presidency late last year to moderate-backed former MLC Legh Davis.

Max Van Dissel, a Frome-based medico, told InDaily he was supporting his nephew’s bid – despite earlier considering a run for the seat himself – saying they share “similar views and my passion for rural health issues”.

“I think that [the successful candidate] should be seen as someone who has the potential to become a cabinet minister.”

The party is this weekend concluding its preselections for Mawson and the similarly divisive Schubert – where Marshall’s chief media advisor Ashton Hurn is running – along with finalising its senate ticket for the forthcoming federal election.