As convenor of the party’s Left faction, Gray has been one of the ALP’s most powerful, but lowest profile figures over the past decade – a period that saw the so-called PLUS (Progressive Left Union and Sub-Branches) group pull off the unlikely coup of getting one of its own installed as Labor leader and Premier.

But Gray, a pragmatist by both nature and necessity, shrugs when asked whether Jay Weatherill’s elevation was the greatest legacy of his tenure.

There are plenty within the party who will privately lament Gray’s approach, but he insists there has been “basically 20 years of stability within PLUS”, which with the majority Right faction, Labor Unity, controls the vast majority of votes at the ALP’s annual state convention.

“I maintained the stability of PLUS as a faction, and we had stability and clout as a minority faction,” he reflects.

“My job as the convenor is to, as best as possible, maintain the balance so that one group or another, or individuals, don’t dominate.”

Which, he notes, was no simple task.

“Labor has as many internal ructions as the Libs, but the Libs always play out on the front pages – and ours never did.”

People want power and influence, it’s that simple… they want to be more important than they fucking are

Gray finished up as convenor last month, at the same time as he took a redundancy from United Voice – the union he had served for much of his career and helmed for the past year, replacing David Di Troia, who also took a package after recent ill health.

The secretary’s role was effectively abolished, Gray says, after the recent national merger of United Voice (formerly known as the Liquor, Hospitality and Miscellaneous Workers’ Union) and the National Union of Workers.

What was previously a federation of state unions run by elected secretaries is now a national body – the United Workers’ Union – with the former state secretaries handed new roles as national executive directors, with specific portfolios.

“I would have been executive director of something, and that didn’t appeal – and I’m 61-years-old,” Gray says.

“I bear them no ill-will – I left on good terms, and it was my choice to leave…

“Despite our disagreements, I left on good terms with them all… I wish them nothing but the best and hope things work out as they hope.”

Grogan was also Gray’s hand-picked successor as PLUS convenor.

Despite talk of a contested ballot for the role, no internal opponent challenged Grogan in a ballot – just as none challenged Gray in each of his 10 years.

“And they wouldn’t have if I’d run again,” he argues.

“Quite a few people wanted me to stay on and do it, but my view was if I’m out, I’m out…

“It wasn’t a role I ever coveted [and] I’m not sorry to be finished – it’s a taxing role.”

Grogan had previously been in line for a Senate role, but was forced to relinquish her claim after a factional game of musical chairs, prompted by the abolition of the safe Left-held seat of Port Adelaide, which was held by Gray’s longtime mate Mark Butler.

“Don’t construe [the convenor’s role] as her reward – it’s not,” Gray notes.

She took it on the chin,” he says of Grogan’s thwarted federal ambition.

“It’s fortuitous that she wasn’t in the senate because she was there to step into this role… she’s a very competent person, she’s well-regarded and well-respected, and I’m hoping for a smooth transition.”

That transition coincided with a broad review of PLUS operations, chaired by deputy Labor leader Susan Close – the Left’s most senior state MP – along with Grogan and Community and Public Sector Union political coordinator Karen Atherton.

Several insiders told InDaily at the time the review had helped avert a messy power struggle to replace Gray, with one lauding it as “a really open conversation and an opportunity to rebuild and renew”.

But Gray dismisses any suggestion the review will herald a factional sea-change, saying: “There’s nothing in it – we always have reviews.”

“That’s their fig-leaf,” he says of his internal opponents who painted the inquiry as a critique of his leadership, noting pointedly: “I appointed the people doing the review!”

The ultimate goal is to win government, and we cocked that up pretty spectacularly

Rather, he insists, the review was “something that came out of the national council” after May’s shock federal election loss.

“We’d lost the federal election, we’d lost state elections [so] it was about having a look at how we operated,” he says.

“The ultimate goal is to win government, and we cocked that up pretty spectacularly.”

But, he insists, “there’s not one [negative] word in the review about me”.

Noting some insiders had flagged an ambition to use the process as a trigger to grow the Left’s factional influence, Gray adds: “People want to do more – but they never do more.”

“All these people, it’s all about [the fact] they want to be politicians,” he says.

“People want power and influence, it’s that simple… that’s what it’s all about.

“These are just people that want to be more important than they fucking are.”

Labor has as many internal ructions as the Libs, but the Libs always play out on the front pages – and ours never did

Gray appears to save particular disdain for the list of MPs and prospective MPs who defected from PLUS over the past decade, most of whom he claims were won over by offers from Labor Unity.

“I don’t deny it’s disappointing when it occurs [but] when you think about it over the scheme of things, it’s pretty small,” he argues, adding if his former factional subordinates can’t manage to “leave with the one who brought them… I think it reflects more on them than the faction or anything else”. 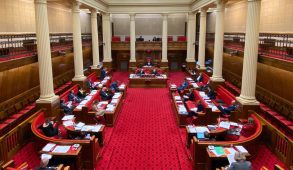 Gray says he’s “already had offers” of work within the party, and will probably return to the fold eventually doing electorate office work, “using my research skills and knowledge to assist punters basically”.

First, he wants to use his long-awaited free time to travel.

He’s already been to Mozambique since his redundancy was finalised, and wants to visit Croatia, while Canada remains on the “bucket-list”.

“I’ll remain a member of the party and the faction, but I’ll be far less active,” he says.

“I have no intentions of being a meddler.”