Alex Antic, a former Adelaide City Councillor and rising star of the Liberal Right, also advocated a significant role for SA in the global nuclear fuel cycle, pouring scorn on “the reckless rush into the unproven, uncosted world of renewable energy” as “a masterclass of failed policy from a failed former Labor government”.

In a speech that received glowing endorsements from senior conservative backers, Antic marked himself out as an ideological successor to former Liberal and outgoing senator Cory Bernardi – who today added more intrigue to the timing of his looming political exit by signing off from his decade-long newsletter.

MP for Barker Tony Pasin posted on Facebook he was “incredibly proud to witness the maiden speech of my good friend and colleague Senator Alex Antic [and] I know he will be a wonderful representative for South Australia”.

In his speech, Antic enthused about “the commonsense pragmatism” of regional Australians, “something from which our city folk could learn a great deal”.

“People from the regions have an unwavering grasp of the things which really matter – the basic tenets of family, faith, freedom and the flag are all alive and well in the country,” he told parliament.

“In many respects there are elements of the regions which remind me of some of the best parts of the Australia of my childhood… an Australia unaffected by the tyranny of political correctness, a phenomenon favoured by those who have become so duplicitous that they seek to construct matters of concern as a method of attracting attention to serve their own political hubris.”

He railed against “corporations seeking to impart a confected political ethos upon their customers” and sporting codes that “prioritise social justice causes over the core business of playing the sports which breathe life into the pay packets of their executives while, in the process, riding roughshod over the interests of grassroots supporters”.

“Happily, that Australia – the commonsense Australia – is alive and well in the overwhelming majority of Australians… but we cannot allow it to be further hijacked by the destructive forces of fabricated outrage, lest it shall wither and die,” he said.

Antic told InDaily he was seeking to highlight issues such as “the overwhelming number of social justice rounds the AFL has” and “the positions adopted by Rugby Australia throughout a whole range of incidents”.

Rugby Australia has been embroiled in an ongoing stoush with former marquee star Israel Folau after tearing up his contract over a social media post in which he claimed that “hell awaits” sinners including homosexuals.

The AFL has championed a range of social causes in recent years, highlighted by regular fixtures celebrating gay pride and an annual Indigenous Round.

Last month, Prime Minister Scott Morrison has attacked a Cricket Australia policy for community cricket that allows players to compete in line with their gender identity, rather than the sex they were born with, as “mystifying” and “heavy-handed”.

Antic said that many of the causes championed by elite sporting codes were “socially meritorious” but that he believes supporters “want sporting bodies to play sport”.

He said the same applied to corporations such as Gillette, Qantas and “many others” who he says have been pushing an ideological agenda rather than focussing on their customers.

“It strikes me as a broad comment about the culture of corporations generally now,” he said of his speech.

He noted though that he did not regard the recent advent of AFLW in the same light.

“I don’t see that as being a political statement… I think it’s been really gratifying to see women get involved in footy,” he said. 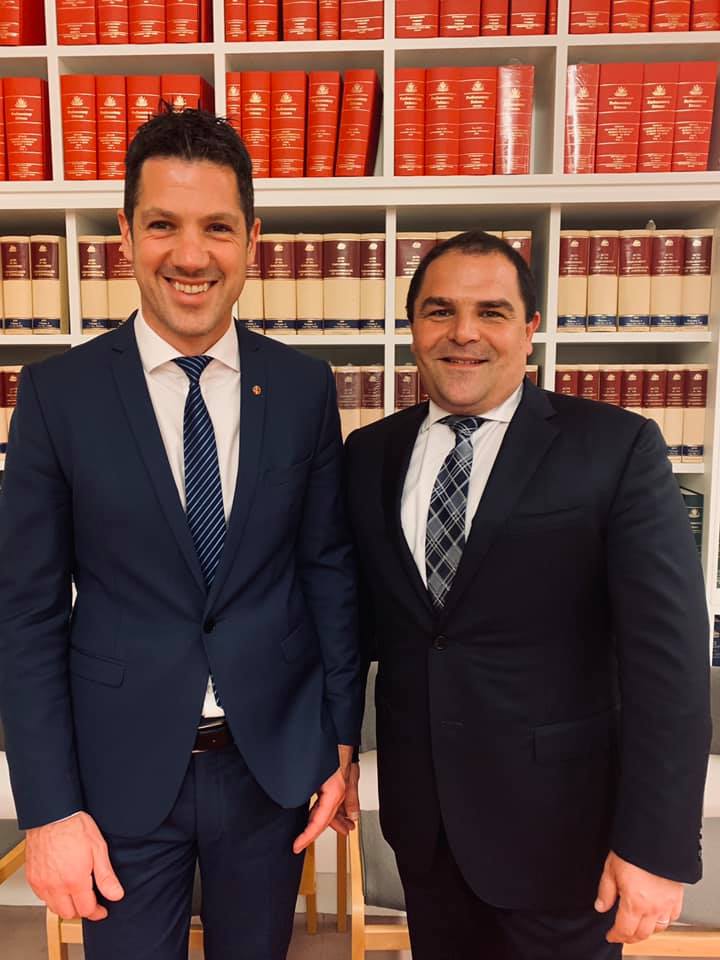 Antic with SA MP for Barker Tony Pasin after his speech. Photo via Facebook

With the Morrison Government last month establishing an inquiry into the potential future for nuclear power in Australia, Antic weighed into the debate, noting SA’s potential role with “a sizeable share of this country’s uranium reserves”.

“The reckless rush into the unproven, uncosted world of renewable energy in my home state represents both the deceased canary down a renewable energy coalmine — to coin a phrase — and a masterclass of failed policy from a failed former Labor government,” he told the senate.

“The curiosity of exporting uranium to the world—and, in so doing, supplying our neighbours with cheap energy proven to be virtually emissions free—while at home we are restricted from accessing the same benefits must be addressed.”

He referred to the 2016 Scarce Royal Commission into SA’s role in the Nuclear Fuel Cycle, saying: “At the very least, there is enough evidence before us to now have a proper debate, one which uses an evidence-based approach devoid of emotion, devoid of obvious hyperbole and devoid of political pointscoring.”

The nuclear debate in SA was closed off by then-Opposition Leader Steven Marshall withdrawing bipartisan support – a decision Antic stopped short of criticising.

“That was a call made by the then-Opposition Leader, but these things are difficult in isolation for state governments,” he told InDaily.

“It really is something which can be led by the federal sphere, and this federal inquiry can do that.

“We’ve got to keep the wheels turning in SA – it strikes me as something we should really look at.”

Antic’s contribution came as Bernardi, who wound up his breakaway Australian Conservatives after a poor showing at the federal election, today gave another strong indication he was set to quickly depart the Senate, paving the way for a hotly-contested Liberal ballot.

The senator issued a farewell edition of his “Weekly Dose of Common Sense” blog after 11 years.

“It has been a wonderful journey but after five books and 556 columns, this will be my last Weekly Dose of Common Sense,” he wrote in the emailed missive.

“I am grateful to those that have been a part of that journey from the beginning and those who have only just begun.

“It has been wonderful to meet so many over the years who have told me they are part of the common sense community.

“That community will continue throughout our great nation but my contribution will be through a different forum.”

InDaily has sought to contact the senator for clarification.