The ALP’s recent caucus strategy meeting in the Barossa – colloquially known as the ‘Labor Love-In’ – was given detailed analysis of the federal election results in SA, with a breakdown of booths relevant to state seats.

Results in the key Liberal-held marginal of Boothby, obtained by InDaily, show strong swings to Labor in more affluent areas, including Hills districts such as Belair and Blackwood, with swings away from the party in more traditional working class booths such as Edwardstown, Ascot Park and South Plympton. 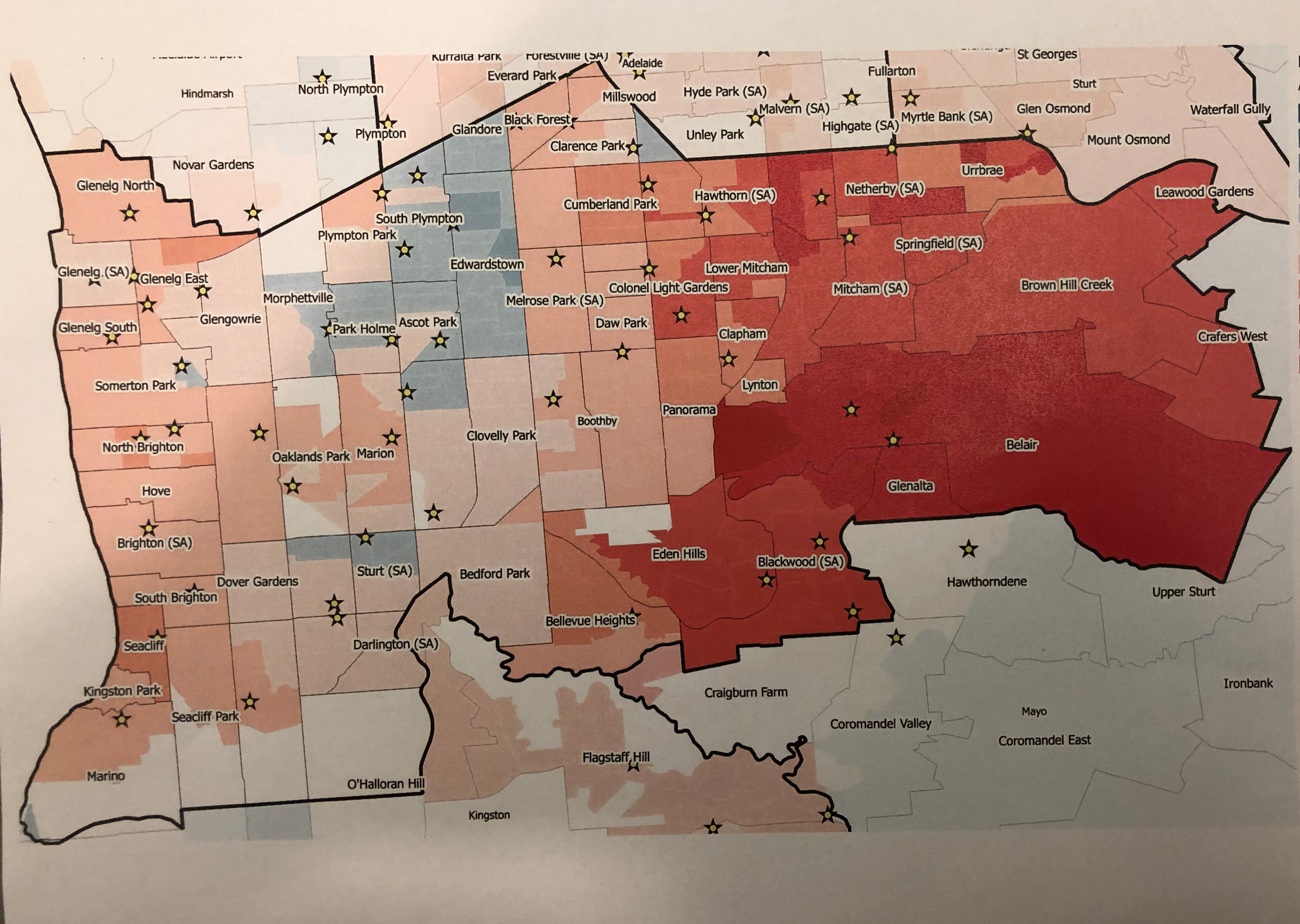 A screenshot of a map showing the total two-party swings in the seat of Boothby, with the deepest red areas denoting strong swings to Labor, and deep blue to the Liberals.

Boothby was retained by Nicolle Flint on a 1.4 margin, despite a 1.3 per cent swing against her after a federal boundary redistribution.

A Labor insider says the Boothby booth result is indicative of a broader trend seen “in every seat in the country” – which they insist dispels the popular election post-mortem that Labor’s financial reform policies cost them the poll.

“The principal conclusion you come to from that data is that there are mild swings in the wealthiest parts of the seat to Labor, and big swings in the working class areas against Labor – that would rather suggest it wasn’t the franking credits that lost us the election,” the source said.

“It was something more fundamental – it was our own base that rejected us. 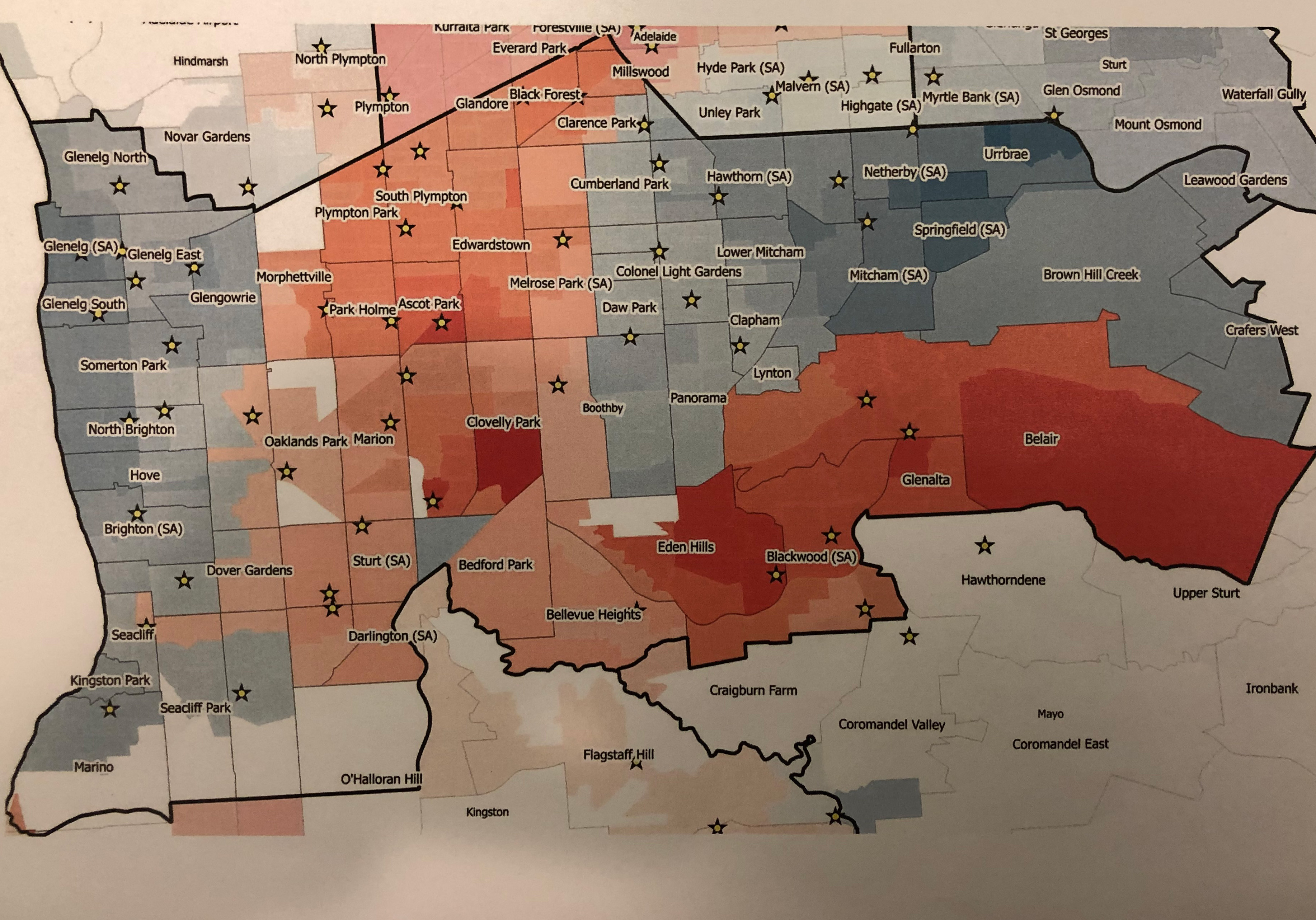 The two-party results in Boothby, with the blue areas those won by the Liberals (lightest to darkest showing strength of vote) and the red areas denoting Labor-won booths.

“Did they reject us on the franking credits [or a] scare campaign on negative gearing policy? Maybe.

“Or did they get the sense that we were more pro-environment than pro-jobs?”

That conclusion is one being impressed on Peter Malinauskas’s state caucus, with insiders insisting Boothby “doesn’t augur well for a state result”.

“If the federal results were replicated, the conclusion you draw from it is you can’t pick up enough Liberal votes with the sort of policies that would appeal to Liberal voters to win – because you’re losing too many rusted-on Labor voters,” the source insisted.

“That’s the conclusion that you draw… don’t desert our base.

“The working-class areas of Boothby turned against us in droves – they thought we went too far to the Left on a range of policies, that we were more interested in saving the environment than saving their job… that’s one conclusion you can come to.”

Malinauskas did not comment directly on the data analysis but told InDaily: “There’s no doubt about the fact there’s a lot to be learned out of the federal election result.”

“Centre-left parties globally have the challenge of wanting to get the balance right between ensuring the interests of people and their work are paramount, but at the same time balancing the very important and immediate need to take serious action on climate change,” he said.

A Liberal strategist though had a different take on the result, arguing votes that had previously gone to the Nick Xenophon Team flowed overwhelmingly to Labor.

Boothby’s result will have ramifications for a number of state seats which cover the same terrain, most notably Waite, which contains Belair and Glenalta – both of which showed strongly for Labor – Elder and Badcoe, which contains Edwardstown and Ascot Park.

But ALP insiders aren’t universally convinced that the lesson from the federal result is to eschew a strong climate change agenda, which was a hallmark of Labor’s 16 years in government.

“People are running around wanting to pull out their agendas – people will seize on things that prove their bias,” said one senior strategist.

But they nonetheless noted the swings to Labor in affluent booths more likely to be hit by franking credits and negative gearing changes.

“What’s fascinating is that all the people most likely to have been affected by big tax increases basically voted for us, and people that were less likely to be affected directly by them… voted against us,” they said.

“People that have high mortgages, who are paying a lot of income upfront, have cost of living pressures and low wages growth – they felt they couldn’t afford an economy that was going backwards and were much more risk averse… so to the extent that the Government was able to paint the cumulative impact of the taxes as a threat to the economy, that cost us votes.” 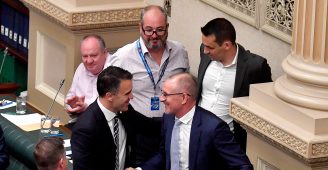 But the source argued the key was to “build a much stronger coalition between blue collar workers and the greens”, arguing by eschewing the environmental agenda “we’d lose whatever we’ve gained”.

“It’s way too simplistic to say there’s a Green/Blue Collar divide – that’s just restating the problem, it’s not getting us anywhere,” they said.

“The real question is how we join those two together – and that’s something federal Labor failed to do.”