With Treasurer Scott Morrison and, according to various reports, deputy PM Julie Bishop emerging as new challengers to see off a Peter Dutton takeover – and amid high drama as parliament was adjourned ahead of Question Time “at the request of Mr Dutton” – Turnbull faced the media to effectively call time on his leadership.

I have never seen a story like this. Three candidates now. Julie Bishop, Scott Morrison and Peter Dutton. And there’s the PM still being the PM… wow wow wow #auspol

Dutton’s backers were last night and today circulating a petition to call for a second party-room meeting, after an initial challenge fell short on Tuesday.

“I now await a letter with the signatures of the majority of the party room,” a stoic Turnbull said.

“If I receive that, I will convene a new party room meeting… at midday tomorrow (11.30am SA time).”

He said at that meeting he would “invite a spill motion to be moved” and “in the event it is carried I will take that as a vote of no confidence”.

“I will not stand as a candidate in the ballot,” he said.

Many MPs believe Tony Abbott will stand in any ballot tomorrow. They say he's used Dutton all along.

Turnbull was not in a reflective mood, but noted that “the Government I have led, the cabinet, has worked very, very cohesively” and “the reality is a minority in the party-room, supported by others outside the parliament, have sought to bully and intimidate others into making this change of leadership”.

“It’s been described by many people as a form of madness and it’s remarkable that we’re at this point, when only a month ago we were just a little bit behind Labor in the public polls – and in our own internal polls just a little bit ahead,” he noted.

In the event Turnbull stands aside, he intimated he would leave parliament, saying: “I’ve made it very clear that former Prime Ministers are best out of the parliament.” 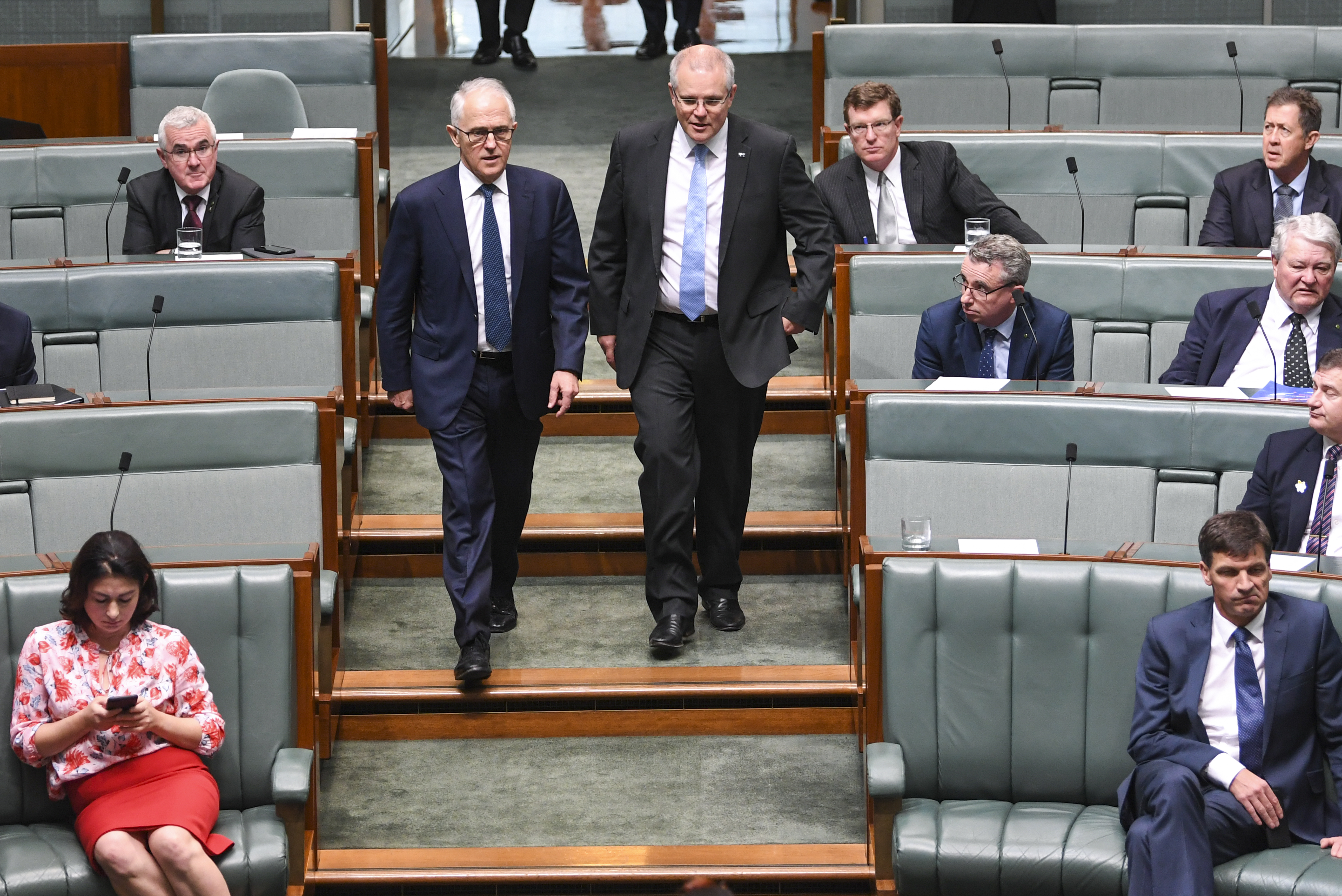 Malcolm Turnbull and Scott Morrison arrive for a vote to adjourn the House of Representatives. Photo: Lukas Coch / AAP

It was important Dutton’s eligibility to be in parliament was clarified, he said.

The former Home Affairs minister has his own legal advice that his interest in childcare centres – which receive a funding stream from the federal government – does not breach section 44 of the constitution.

This bans from parliament anyone who has “any direct or indirect pecuniary interest with the public service of the commonwealth”.

“This is a very, very significant point,” Mr Turnbull said.

“I cannot underline too much how important it is that anyone who seeks to be prime minister of Australia is eligible to be a member of parliament.”

The government’s legal advice is expected to be ready early Friday.

Turnbull said the public would be “crying out for an election” once the dust settled.

Earlier, several frontbenchers, including Mathias Cormann, Michaelia Cash and Mitch Fifield, resigned from cabinet after telling the prime minister he no longer has majority support in the Liberal partyroom.

“When I have five cabinet colleagues telling me they supported Peter Dutton on Tuesday … that is not something I can ignore.”

He said he had taken the action “with great sadness and a heavy heart”.

Senator Cormann, who yesterday publicly expressed his support for the prime minister at a media conference, said he initially took it upon himself later in the day to tell Turnbull he no longer was supported by party colleagues.

He said Dutton represented the best chance of winning the next election.

“We’ve made that judgment and it is now a matter for the party room,” he said.

The two other ministers expressed their support for Dutton.

“Earlier this morning, I called the prime minister to advise him that it was my judgment that the majority of the party room no longer supported his leadership,” Dutton told reporters at Parliament House on Thursday morning.

“As such, I asked him to convene a meeting of the Liberal Party at which I would challenge for the leadership.”

A few minutes ago I spoke with Malcolm Turnbull to advise him I believed the majority of the party room no longer supported his leadership. Accordingly, I asked him to convene a party room meeting at which I would challenge for the leadership of the Parliamentary Liberal Party.

In extraordinary scenes, the Government moved to adjourn parliament amid the battle over the Liberal leadership, with Bill Shorten arguing the coalition is “irreparably split” and should hang their heads in shame.

This morning I tendered my resignation to the Prime Minister. It has been a privilege to serve as Minister for Law Enforcement and Cyber Security and I remain deeply committed to the people of Hume. pic.twitter.com/ypqv7HQbKQ

So far 13 ministers have resigned, including assistant ministers Michael Sukkar and Zed Seselja, stepping up pressure on the prime minister to quit. 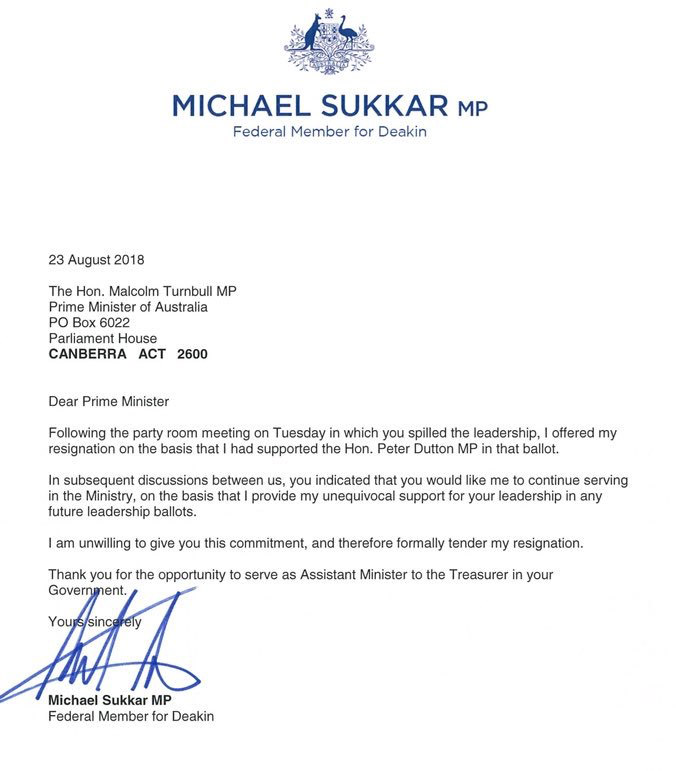 “What is happening right now is the government have decided this place has fallen apart so completely that they are dissolving the parliament for the day entirely,” he told the lower house this morning.

Burke said the coalition government was completely self-obsessed and had no regard for Australian voters.

“There will be no question time today because those opposite have stopped governing.”

Shorten said adjourning parliament was a clear admission of failure and the coalition should hang their heads in shame.

“The government may adjourn the parliament, but they cannot outrun the weight of failure of this government,” he said.

That followed the PM’s own Assistant Minister James McGrath last night insisting his resignation – initially refused – be accepted, as Dutton’s backers mobilised for a second challenge.

Dutton himself and Concetta Fierravanti-Wells left the front bench earlier this week.

Dutton admitted he has been calling Liberals to win support for a second challenge after failing 48 votes to 35 in the snap leadership ballot on Tuesday.

The electorate, however, appears to be supporting Turnbull.

A Morgan poll of more than 1200 voters picked Turnbull as the better prime minister over Shorten, 52 per cent to 44.5 per cent.

But Shorten thumped Dutton 59 per cent to 36.5 per cent when voters were given the chance to pick between them.

Dutton launched a media campaign yesterday, going on Melbourne radio to call for a royal commission into fuel and energy prices.

But Morrison yesterday unleashed on Dutton’s plan to take the GST off electricity prices, calling it a “budget blower” that would cost $7.5 billion over four years.

Dutton’s push for another challenge lost some steam amid questions about his parliamentary eligibility over the public funding of childcare centres held under a family trust.

Burke said there were also serious questions about Dutton’s eligibility to remain in parliament.

“The constitution is clear: you can’t be taking cash for your business from the government and at the same time be a member of parliament,” he told Sky News.

Bret Walker SC concludes that Dutton is disqualified from Parliament under s 44(v) of the Constitution. The 17 page advice is a careful, forensic examination of the issues by the most authoritative member of the Bar on constitutional issues outside of the High Court.

Having read the advice by Bret Walker SC, it is clear that Peter Dutton should be referred to the High Court. There is a real prospect that a person seeking to be our PM has breached section 44 of the Constitution and is disqualified from Parliament.https://t.co/n2fNxJjXuq

Dutton hit back at the “spurious and baseless” campaign calling his eligibility for parliament into question.

He released legal advice from Colin Biggers & Paisley Lawyers showing he was in the clear.

The legal advice is from December 2017 – but the law changed seven weeks ago.

Dutton has been facing questions over his interest in two Brisbane childcare centres through the RHT Family Trust, but he queried why the story came out as he was challenging the prime minister.

“The timing on the eve of current events in Australian politics is curious,” Mr Dutton said in a statement.

“There has never been any doubt about my eligibility to sit in the Parliament and I attach the unequivocal legal advice I obtained in 2017 to that effect.”

Dutton’s decision to intervene and grant visas to two foreign au pairs in 2015 has also come back to haunt him, now being referred for a parliamentary inquiry.

Labor referred the matter to the upper house’s legal and constitutional affairs committee today. The inquiry will look into allegations concerning the inappropriate exercise of ministerial powers, and will report by September 11.

Labor senator Louise Pratt said she was hopeful the inquiry would answer questions about this matter properly answered.

“Previous questions asked in estimates have not got to the bottom of whether Minister Dutton’s use of ministerial intervention powers, with respect to the visa status of two au pairs, were exercised appropriately,” Senator Pratt said.

In the first case, an au pair whose visa was cancelled at Brisbane’s international airport in June 2015 was able to make a phone call, and within a couple of hours, Dutton, as immigration minister, approved a new visa using his ministerial discretion powers.

In November the same year, Dutton granted a visitor visa to a second au pair.

Dutton has said he doesn’t know the two individuals involved and they didn’t work for his family.

He has denied the decision breached ministerial standards.

Former prime minister Kevin Rudd tweeted this morning that Dutton did not deserve to lead the country for boycotting the apology to first Australians.

Dutton was an MP for 7 years and was 38 when he boycotted the apology to first Australians. A grown man, experienced politician who knew what he was doing – sending a dog-whistle to racist sentiment. A question of character.For this reason alone, he should never be Prime Minister

Several Nationals MPs, including Kevin Hogan from northern NSW, have threatened to leave the government and sit on the cross bench if Dutton becomes prime minister.