The review, which details a blueprint for regaining power in 2022, laments that Labor was “running to form a coalition”, either with independents or Nick Xenophon’s SA Best, while Steven Marshall’s cashed-up and “confident” Liberals were “running to win”.

Described as “arguably the most thorough review in the party’s history”, the document – which was presented to the ALP state council last night and distributed to the broader party today – identifies “socially progressive professionals”, small business, young people and regional South Australians as target voters with which Labor must urgently reconnect.

Compiled between April and July by former state minister Steph Key and current federal MP Nick Champion from more than 100 written and verbal submissions, the review suggests Labor became distracted by the threat posed by Nick Xenophon’s failed SA Best raid on the lower house, and argues “it’s conceivable that had we prepared earlier and better in some seats, we may have won one or two extra seats”.

In particular, the review notes, “we should not have lost King” – the inner-northern suburbs seat that was nominally Labor’s most marginal after the 2016 redistribution.

The seat became a debacle for the ALP when, as InDaily revealed last year, Left-aligned hopeful Jo Chapley quit her faction to contest neighbouring Adelaide for the Right because she did not want to run in King, leaving the Left to instead preselect Housing Choices state manager Julie Duncan.

Liberal Paula Luethen won the seat by just 0.7 per cent, giving the Marshall Government 25 seats overall in the 47-seat parliament.

He lamented the “cold comfort” that Labor lost despite a statewide swing towards it of 1.1 per cent, saying “while it is difficult to come up with another example of an opposition winning with a swing against them, it happened, and we lost”.

“It recommends making greater investments in our people, by initiating leading edge training programs for candidates and campaign managers, and then putting them into the field sooner.” 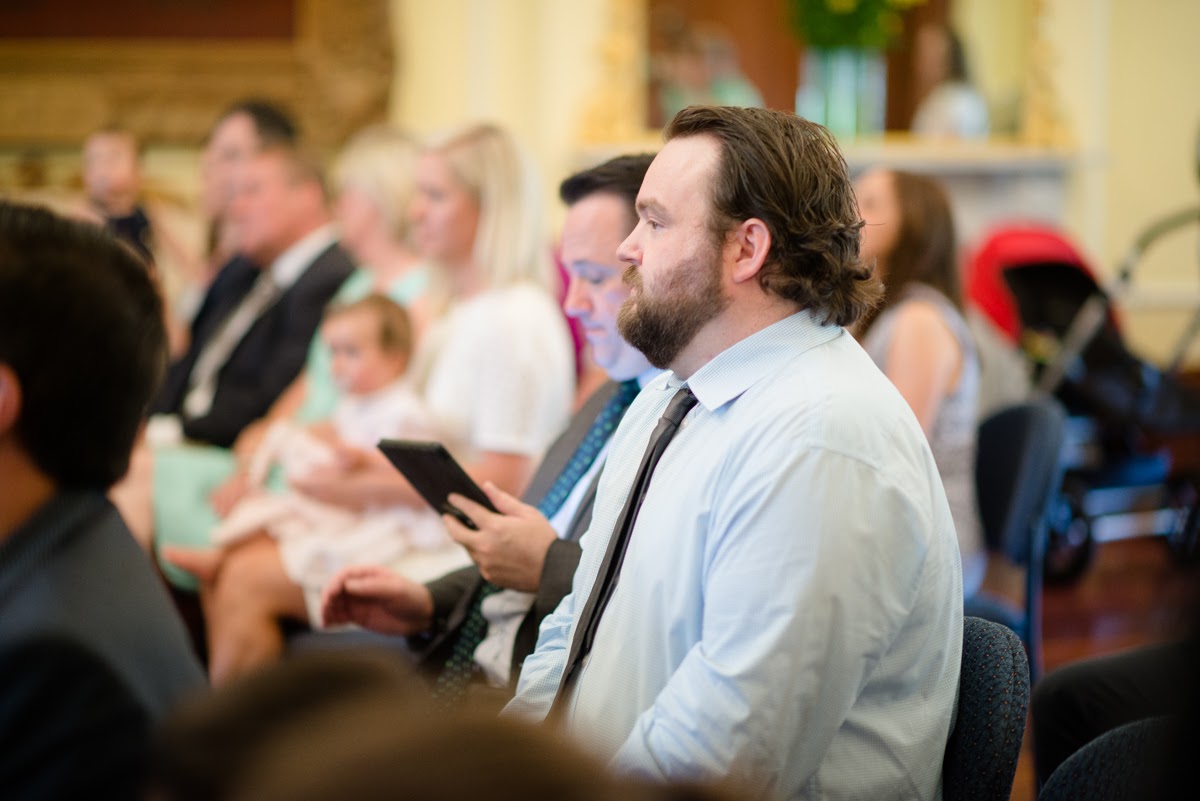 Many Labor figures have publicly posited the notion that the controversial boundary redistribution – which the ALP unsuccessfully contested in the Supreme Court – cost it government.

The review notes the election-night statement of respected ABC analyst Antony Green that “the final results confirm that the redistribution was largely responsible for the election outcome”, but emphasises: “It would a very bad mistake to say we lost the election entirely due to a bad redistribution.”

Rather, the document identifies four broad culprits: the redistribution, an ‘It’s Time’ factor after 16 years in power, “mistakes” such as Oakden, TAFE, Families SA scandals and Transforming Health – which was described as “an ambitious policy response” poorly rolled out – and strategic mistakes “at the micro-level”.

“The electorate marked us down for the number of real and perceived problems that occurred over the last term and beyond,” the report states.

“These issues enabled our opponents and the media to question our competence to govern.”

It notes “specific weaknesses” that were “repeated to us throughout this review”. Labor was “unable to counteract the impact of the various negative issues (perceived or real)”, and while it “reacted rapidly and well” to the initial Xenophon threat, “we did not adequately adjust our strategy and tactics as [SA Best’s] support slid”.

Labor notably continued running anti-Xenophon attacks ads throughout the last week of the campaign, with insiders fearful of losing a swag of northern-suburbs seats to the interloper.

“Some of our research showed that we could have made a different decision about SA Best as the campaign progressed (specifically, that we seemed to let the Liberals off too lightly as we were targeting SA Best),” the review argues.

“Many members raised this issue during the review, of course, all with the benefit of hindsight.”

It argues while it is “plausible” that Xenophon’s party “could have won several seats off us… the fact remains we need to get better at understanding the rapid movements in a more politically febrile atmosphere”.

Our traditional base is shrinking, our affiliates are shrinking in numbers… rebuilding our base is critical

Several candidates were also “preselected too late”, with candidates and campaign teams “not as strong or well-matched as they needed to be” in several seats.

“Black [in the southern suburbs] and King were highlighted as two examples where we needed to think through the candidate/campaign strategy/campaign team much better,” the review states. 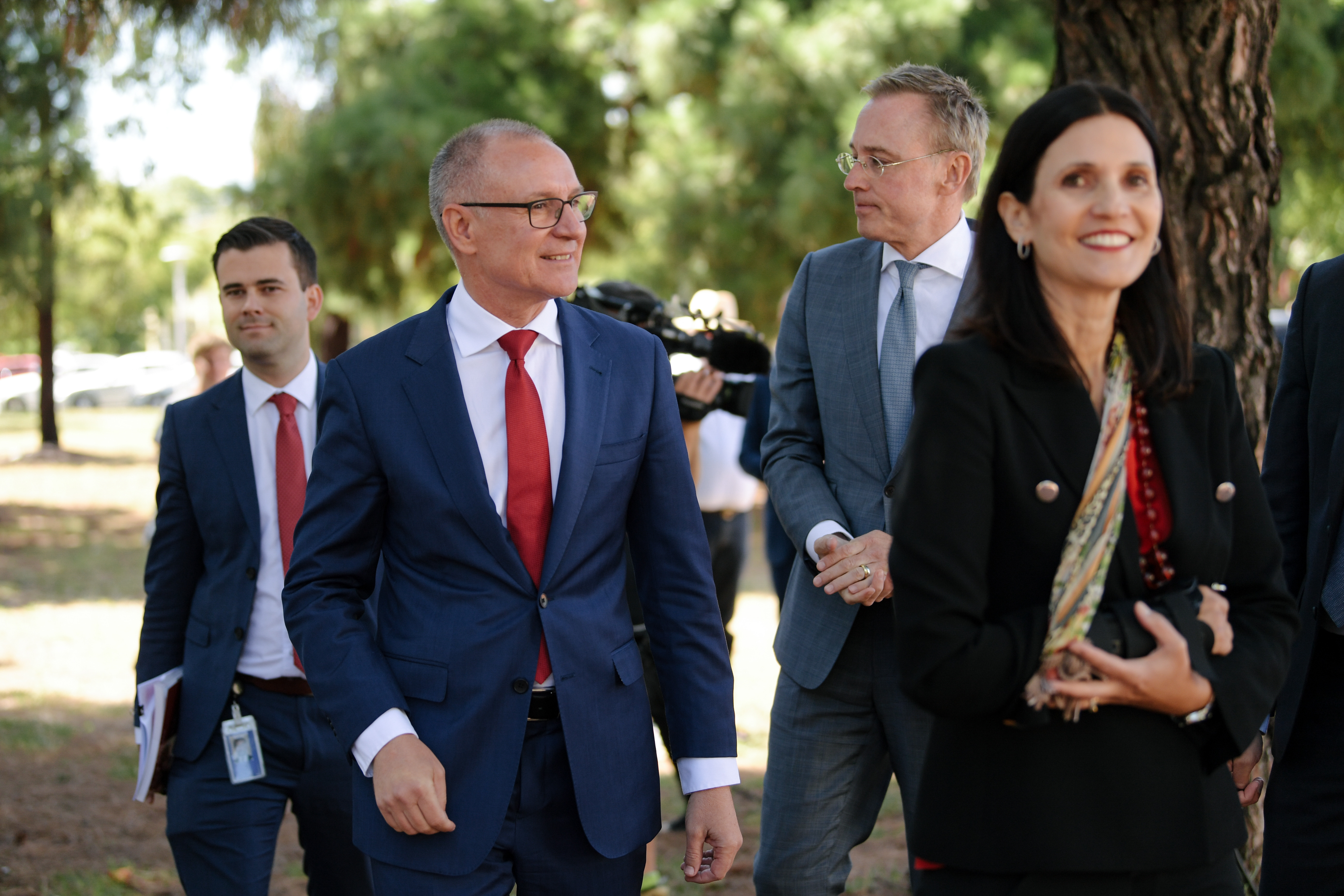 The party was also ill-prepared at grassroots level “to deal with the disruption that emanated from the redistribution”, which “cost us time, energy and eventually votes”.

The Liberals will always have more significant financial resources

While Labor’s campaign was “seen by a number of seasoned campaigners as being fairly good”, it was “not a ‘stand-out’ campaign (let’s face it, we lost)”, with the review arguing “we need to do much better in developing detailed and fully worked campaign strategies for our target seats” – both “those we need to retain [and] those we need to win”.

“Better developed campaign strategies would enable us to select better candidates and campaign managers, and to focus on the critical issues and areas in each electorate across the four years between elections,” it states.

It urges “a four-year plan for both Party Office (a Statewide plan, plus separate metro and regional plans) and for the critical seats we need to retain or win”.

This would include a review of Labor’s pre-polling and declaration voting strategies, with “the research previously conducted showing the poor return in this area” that is inconsistent with a modern trend towards early voting.

Fundraising was raised as a problem “by pretty well every member we spoke with” with the spectre of candidates “holding fundraisers in the last two weeks of a campaign” singled out for criticism.

“The Liberals will always have more significant financial resources… we can’t just rely on an incompetent Liberal Government,” the review notes.

Submissions noted that the Liberals, more so than in previous elections, were “running to win”, while Labor “were running to form a coalition with any independents and/or potentially Xenophon”.

The Liberals, by contrast, “ignored Xenophon (rebuffing him from Day One)”, while “Marshall appeared confident and assured, unlike in 2014”.

This was despite the review’s claim – based on internal party research – that “during 2017 many voters still didn’t know much about Steven Marshall and those that did had a relatively low opinion of him”. 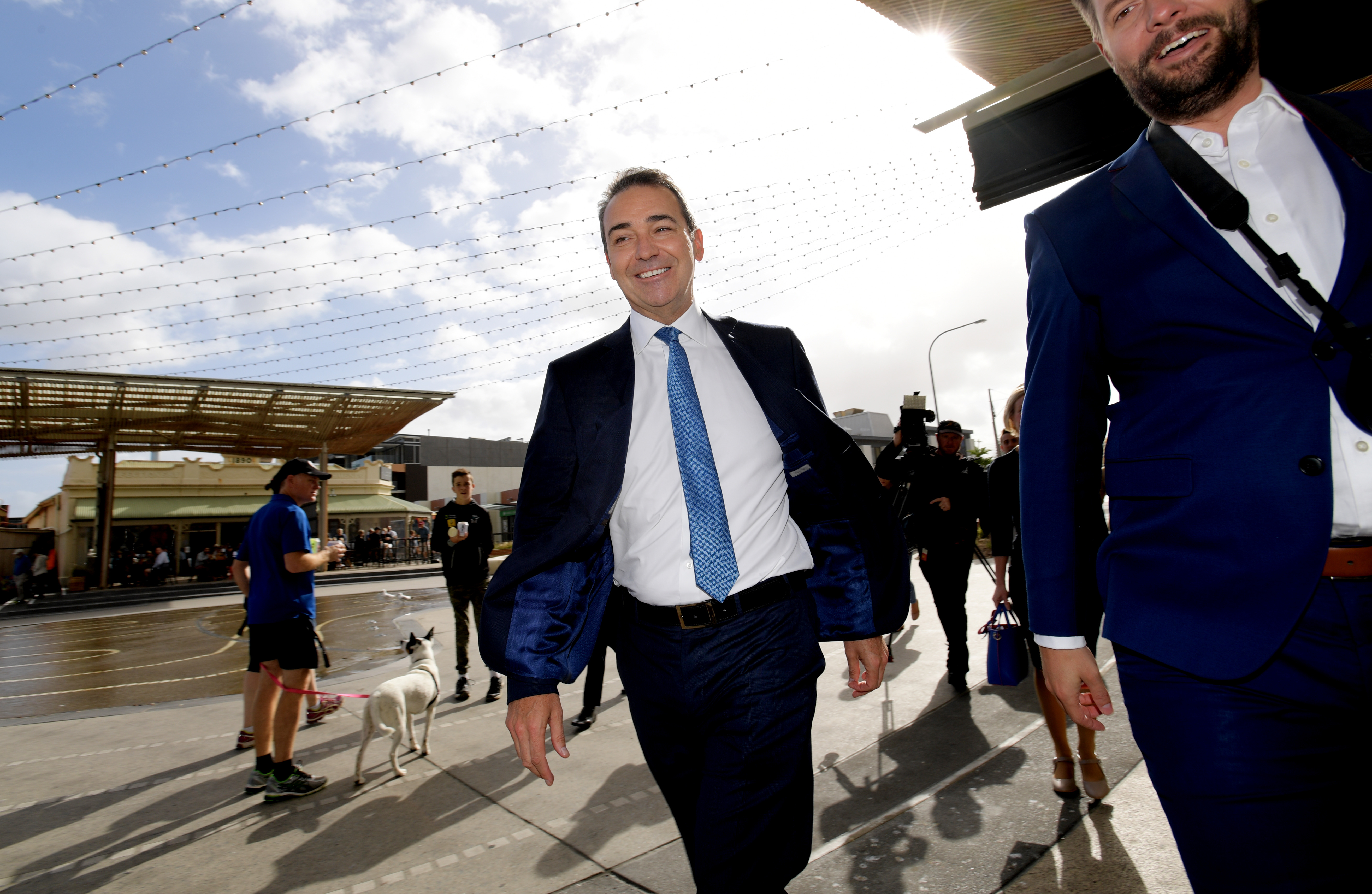 One reason for the Liberals’ confidence was their investment in the Koch Brothers-backed i360 campaign software, as reported by InDaily in February.

“While i360 was not necessarily a much better capability than we have, it appeared to give them confidence,” the review notes.

However, it concedes, “the Liberal camp is getting better at one of our traditional strengths… like day-to-day campaigning tools, it is time to leap ahead in our research and analytical capabilities”.

“Potentially, we need an independent review of our research and analysis to ensure we continue to use this as an edge over our competitors,” it says.

“We have held an advantage in campaigning techniques over the Liberals. However, they have caught up. We now need to regain that advantage.”

It notes that the Libs’ “two-pronged approach to research and analysis” served them well, with “high-quality quantitative and qualitative research” from the local team, including Marshall’s office, combined with access to the Federal Liberal research capability.

“Several senior Liberals have commented that when their local research began to match the Federal research, they knew they were looking good,” the review states. 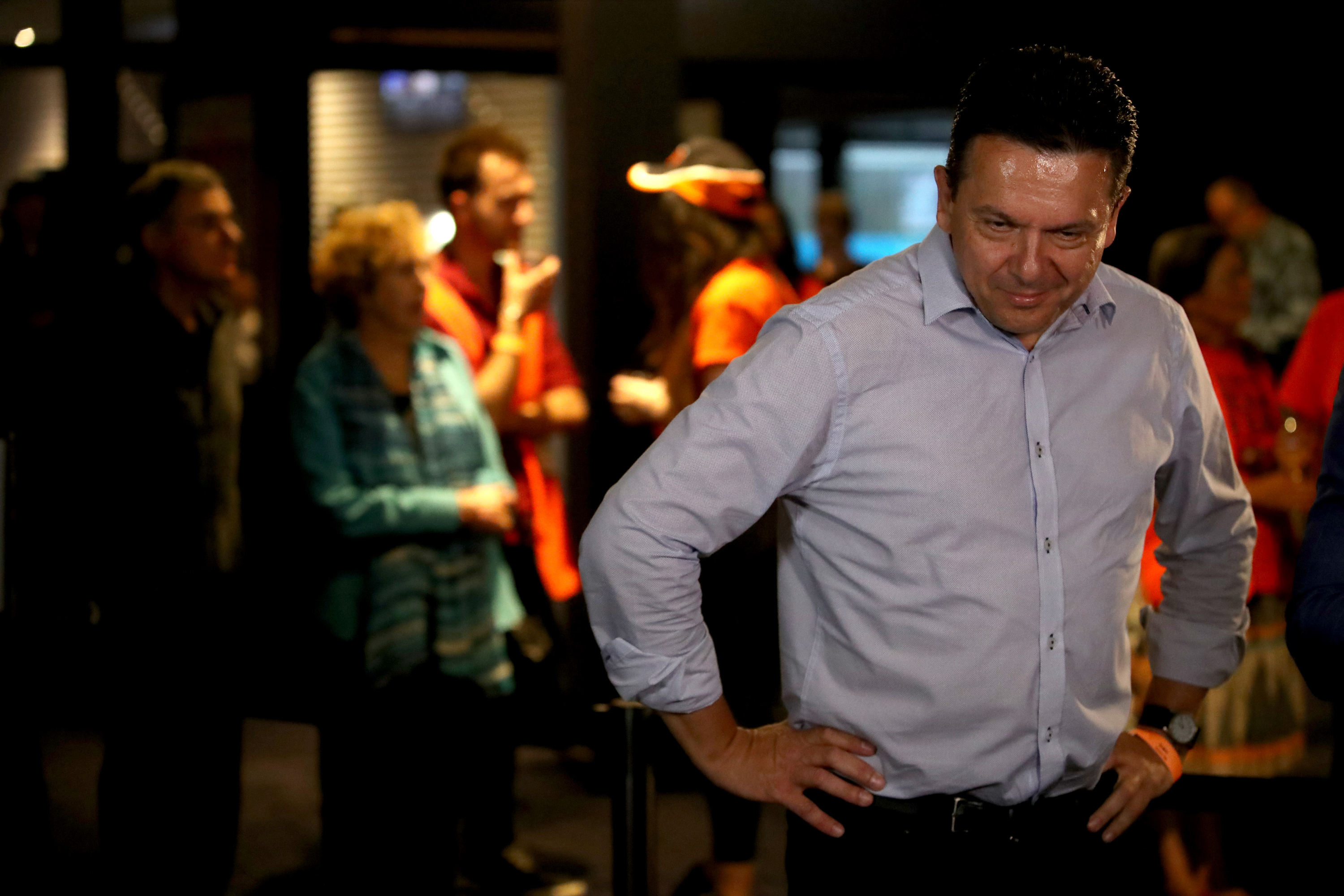 It suggests improving the ALP’s campaign tools, with the dated ‘Campaign Central’ database, in particular, requiring “some dramatic improvement”.

“We need to lift our training capability… we have relied on our historical expertise and experience, but we are not preparing well enough for the future.”

However, it concedes: “It’s likely the Liberals will always outgun us in research and analytics… they simply have more money.”

The report suggests the Liberals had a favourable run with the media, pointedly noting “they received a lot of media kudos from some very small announcements [while] we received much less (or even criticism) from some comparatively big announcements”.

The review also urges “preparing a more detailed and exhaustive strategy approach for the election more generally and, specifically, for our target seats”.

It says the party must “develop these strategies well before the election: years out, not months”.

It also recommends “a full review of our advertising and PR capability (including our partners)”.

“This doesn’t mean we are unhappy with the support we’ve received to date, but after 16 years in government, we need to rewire ourselves as an opposition and put ourselves in position to be the next government,” it says.

“What served us well in government will not necessarily serve us well in opposition.”

However, it suggests a broader approach to rebuilding Labor’s electoral base under Peter Malinauskas and his deputy Susan Close, saying “we need to be clear about the meaning of the Labor brand for voters in 2022”. 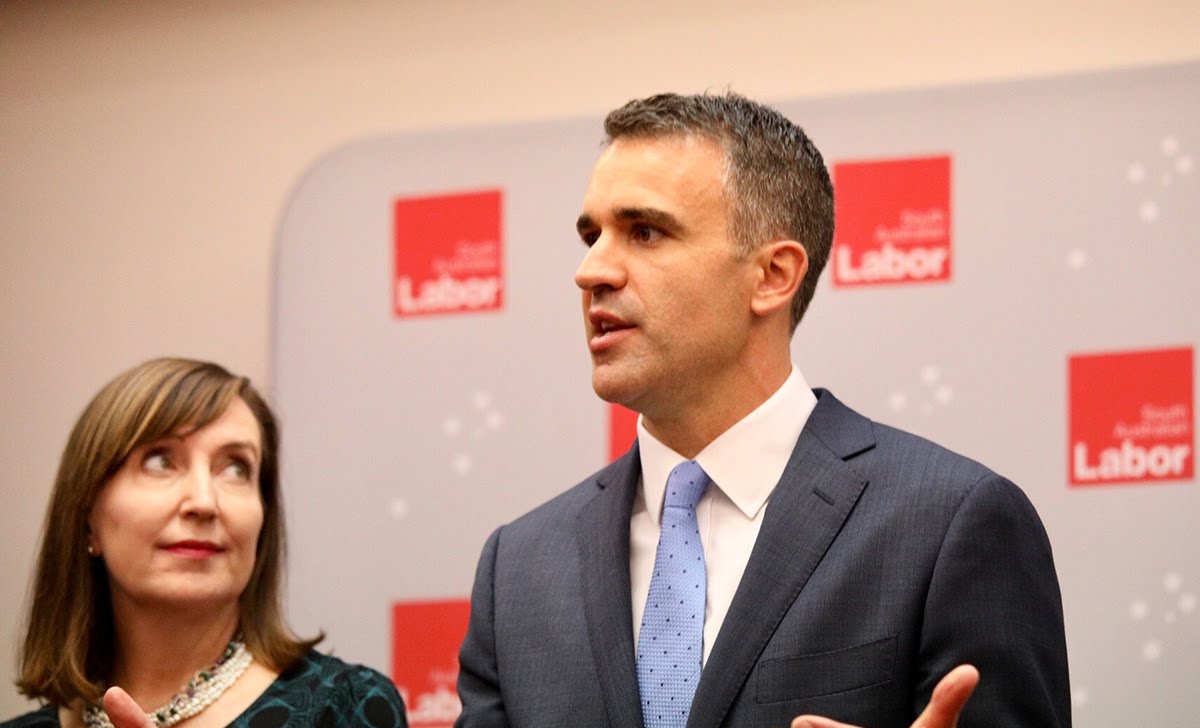 Malinauskas and Close face the media after their confirmation. as leader and deputy. Photo: Tony Lewis / InDaily

“We also need to revisit all of our policies and ensure they are both fit-for-purpose for 2022 and will attract a two-party-preferred vote of over 50 per cent,” it urges.

“While our superior campaigning combined with the Liberals’ poor performance helped us to win in 2010 and 2014, these issues were less relevant in 2018 (the Liberals lifted their campaigning performance to, arguably, as good as ours and their Leader was able to hold together a relatively united team).”

Labor is urged to rethink its sub-branch structure, with the review noting “our traditional base is shrinking”.

“Our affiliates are shrinking in numbers… rebuilding our base is critical to our capability to run successful campaigns,” it says.

The fact that the election result played out largely according to the nominal boundaries suggests to the authors that “we have work to do in our policy development to broaden our appeal to demographics that may be attracted to the Liberals or a party like SA Best”.

“In particular, we need to look at groups like socially progressive professionals (including the more educated voter who have been Labor supporters since the days of Whitlam and Dunstan), winning back small business (who in many cases come from a Labor base) and refocusing on the young who are either disinterested or who vote Green,” they write.

They also urge rebuilding the ALP base in the regions, where the party’s vote “is perilously low”.

This recommendation is in line with a submission to the review by Labor veteran Chris Schacht, revealed by InDaily last week.

“We will need to think about not only policies, but also candidates who appeal to this broader voter group,” the report states.

“Specifically, we need an exhaustive longer-term strategy to achieve this.

“We can’t just be an effective Opposition and party organisation and hope that the polls turn our way.”

The report urges the ALP state executive to form a team to formally work through its findings, “to show that it values this feedback by responding seriously to this report and not letting it gather dust on the shelf”.