The Property Council has been spruiking its leaders’ lunch – a debate to take place a day before writs for the March election are issued on February 17 – with Weatherill listed as “invited”.

The Premier said today that he would not attend, in a media statement that described the event as a “Liberal Leadership showdown” representing “a contest for conservative hearts and minds”.

The statement derisively refers to “prominent SA Liberals Steven Marshall and Nick Xenophon battling it out at a Liberal Leaders’ debate”, with Weatherill noting that “with the State Liberals in such disarray, the debate will give SA business leaders the opportunity to consider former Liberal Nick Xenophon as the alternative Liberal Party leader in SA”. 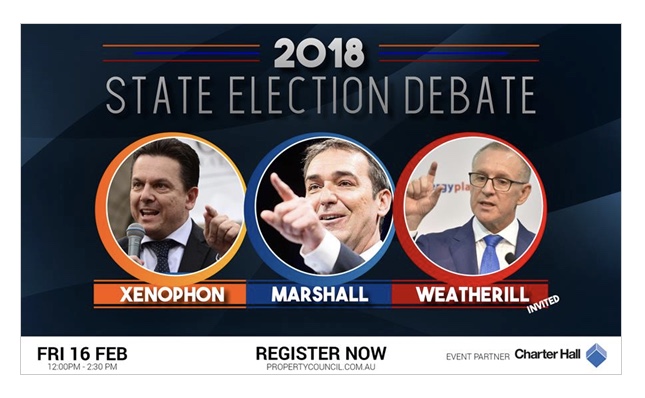 An invitation to the event.

Marshall today reacted angrily to the snub, telling InDaily in a statement: “What a pathetic comment from a man who has completely abandoned the South Australian business sector.”

“After nailing his anti-business colours to the mast through his attempts to introduce massive new taxes, Jay Weatherill is now running away from a genuine and important debate,” Marshall said.

Xenophon said Weatherill’s refusal to attend was “an extraordinary development” that “shows cowardice on the part of the Premier to face up to a very important sector that drives growth and jobs in the state”.

“To characterise this as a contest between two Liberals is deeply offensive, given my voting record in the Senate was about even between Liberal and Labor on key legislation,” he said.

But the move appears part of a concerted strategy – detailed to InDaily by ALP insiders in recent days – to position Labor as the non-conservative alternative to the Liberals and SA Best during the election campaign.

It’s a strategy that has been evident in recent pronouncements by the Premier, including his oft-repeated refrain that Labor will boast the highest number of seats in the lower house after polling day, a bid to paint the political Left as a settled proposition that can “deliver a strong and stable and secure government for the future”, whereas “if you vote orange or blue or any of the other shades of the rainbow, you don’t know what you’re going to get”.

Weatherill, who was not available to speak to InDaily today, told FIVEaa last week that the election had “turned into a bit of a race between us and Nick [Xenophon, because] the Libs look like they’ve given up”.

“They’re barely on the scene at the moment, so it’s very much coming down to a Labor/Xenophon battle,” he said.

It’s a theme he hammered again today, gleefully scuttling the Property Council event – just days after the organisation’s executive director Daniel Gannon complained publicly that a promised $250,000 grant to help lure companies to headquarter in Adelaide had been axed, as payback, he claimed, for the council’s lobbying against the dumped state bank tax.

Another prominent critic of the tax, Business SA, also lost $100,000 that was earmarked for trade missions.

Weatherill said the Property Council had advertised the event before confirming his attendance, with his office saying he “will decline the offer to participate”.

His office would not reveal his alternate plans for the day, saying they were “to be revealed”, but insisted Weatherill would participate in “at least three” leaders’ debates during the campaign, including at the SA Press Club on February 2. 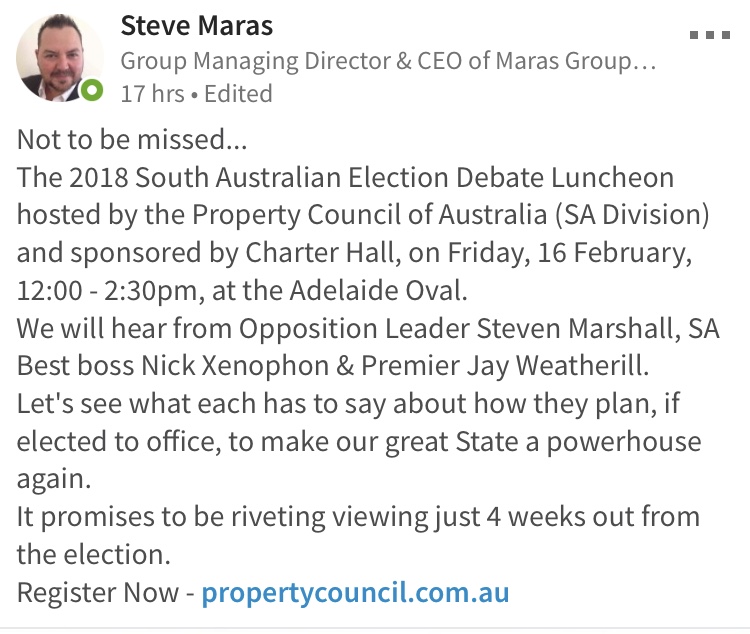 “I will participate in several other leaders’ debates – just not this one,” Weatherill said in a statement.

“This debate will determine once and for all, whose tie is the brighter shade of blue. [It] will determine the true Liberal Party leader – the embattled Steven Marshall, or Nick Xenophon.”

Gannon – who was Marshall’s chief media adviser until after the last election – has been targeted by Labor in recent days, with Treasurer Tom Koutsantonis singling him out on Twitter as a Labor critic.

Basic homework pays off, Daniel Gannon is a Liberal, always has been. SA Labor has abolished all stamp duties on all commercial properties, the only state to have done this, a great initiative for the property sector but all Daniel does is criticise Labor. https://t.co/jGCRDrN0Io

Your loudest and proudest supporter of commercial stamps abolition. Any alternative analysis of my support is 100% wrong. We call things as we see them, which you well know.

That followed Gannon failing to share the Weatherill’s Violet Crumble-fuelled jubilation after the Government helped bankroll Robern Menz’s chocolate coup with a $750,000 jobs fund grant and a $900,000 Investment Attraction Agency – the week after it pulled its grant for the Property Council.

Gannon told InDaily in a statement the leaders’ debate was held for “an audience of business leaders and industry captains”.

“While it’s disappointing that the Premier has chosen to not participate in the event, we respect his decision to do so. However, any suggestion that this organisation or this sector is behaving in a partisan manner is completely fictitious.”

Gannon said “despite some recent differences in policy opinion, the Property Council and Government have partnered on many occasions this past four years to deliver good outcomes in planning, sustainability, red tape, tax, density, and other areas”.

“It’s disappointing that the Government now seems to be dishing out even more ‘political payback’ at a time when the business sector and community is seeking solutions to important policies that target job creation,” he said.

“A discussion with Steven Marshall and Nick Xenophon is an important part of the story of the upcoming election campaign, and while we would have preferred the Premier’s involvement, the property sector is keen to better understand the alternative policies from the state’s alternative leaders.”

Gannon’s Twitter timeline suggests a bipartisan approach to policy debate. He recently took Liberal MLC Andrew McLachlan to task for an Advertiser column which derided recent “banal” city architectural projects, including at Adelaide University and the Convention Centre, which Gannon called “a disappointing contribution from a policy-maker”.