InDaily can reveal Liberal state director Sascha Meldrum wrote to state council delegates yesterday telling them Murray – who was preselected in March to contest the Hills seat of Davenport – “has submitted his resignation… in order to focus on campaigning”.

Vice-president and prominent lawyer Morry Bailes will act in the president’s role from this week before a formal replacement is elected next month.

But senior party figures have confirmed that there is cross-factional support for Olsen to take the reins, under a deal that would see the Liberal elder statesman – and current SANFL president – return to try and steer the party to a long-awaited election victory.

Olsen did not return calls today, but responded to a text message inquiry saying he had “been asked to assist with the unexpected casual vacancy”.

He cited past MPs such as Alexander Downer, Robert Lawson and Grant Chapman filling the role previously.

One senior figure told InDaily the state council would vote for its new president on June 16 and “Olsen will be a nominee”.

“He’s got support from both sides of the party,” the source said.

“He is prepared to do it to help win the election.”

It will be the first official party role Olsen has held since he retired from his Hills seat of Kavel at the 2002 election – when Labor first seized power. He had stood down as Premier only months earlier over the Motorola controversy.

It is not, however, the first time he has served as state president – he previously held the role back in 1979. Ironically, he maintained the position despite running as the party’s candidate for the since-abolished seat of Rocky River.

“He’s done the job before, albeit in a very different era,” enthused one insider.

Despite cross-factional support, Olsen’s candidacy will open the party to political critique, given the notorious factional spats of his era in parliament and his longstanding status as a figurehead of the conservative Right.

His rivalry with moderate Dean Brown was a constant distraction for the party across the 1980s and ‘90s, both in opposition and government.

But a senior moderate figure told InDaily they had “spoken to Olsen and indicated complete support for his candidacy, and that’s a position shared broadly across [the faction]”.

“For any other argy-bargy that exists, there’s a fairly strong unity of purpose at present – and this is a demonstration of it,” the source said.

“John will bring a strong understanding of campaigning, fundraising, the delineation between the parliamentary party’s role and the organisational role, and making sure everything is geared towards helping Steven [Marshall] and the candidates.”

Bailes confirmed he was acting as president after Murray’s resignation, but wouldn’t comment further, saying: “We’ll just let the process take its course.”

However, it’s understood he won’t nominate for the permanent role, although there is no guarantee there will not be a challenger.

“It’s the Liberal party – there’s always a potential rogue, stray element,” said one insider on the prospect of a ballot.

“But I’d be surprised… in the end everybody has confidence [in Olsen] in terms of overseeing the party administration.”

Another said that “under our system there’s no guarantee someone else won’t put their hand up [so] there may or may not be a contest… but it will be a contest John Olsen will win.”

Murray did not respond to inquiries today, but it’s understood he wants to focus full-time on campaigning, given his prospective seat is one of a handful likely to be targeted by Nick Xenophon’s fledgling SA Best.

He is replacing Sam Duluk in the substantially redrawn electorate, with the incumbent set to take on former Liberal Martin Hamilton-Smith in Waite. 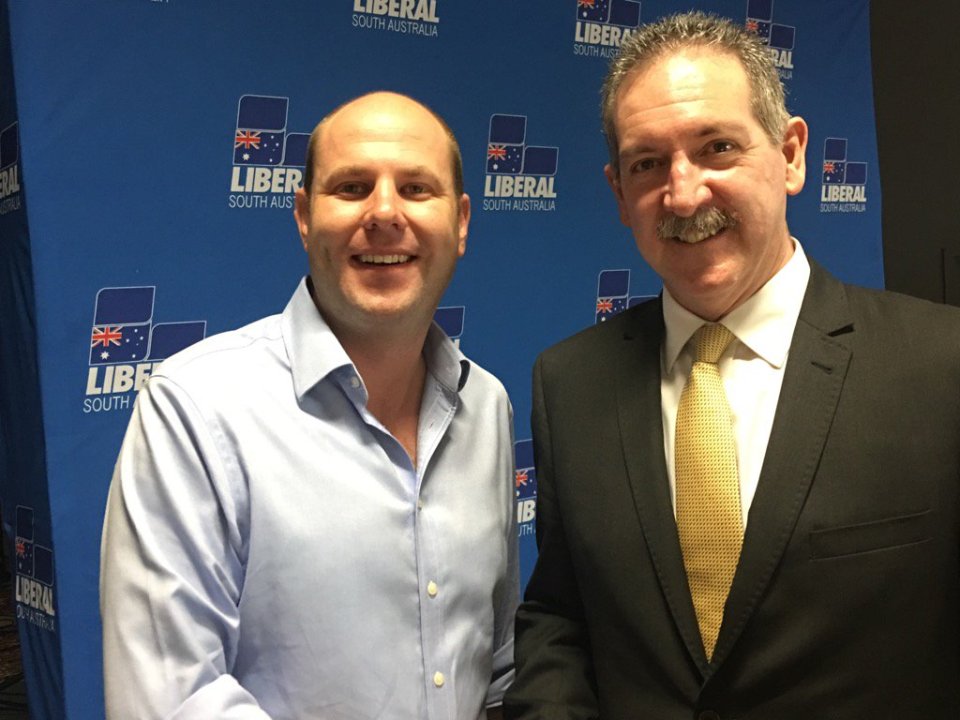 “Murray’s a newbie and Davenport is deep in the Hills… who knows if Xenophon is going to target it [so] he needs to be a candidate focused on winning the seat full-time,” an insider said.

After a Senate stint, he returned to state politics to re-take the leadership, but was famously beaten by Brown – only to usurp him in a coup four years later. He narrowly won the 1997 election thereafter.

After leaving politics he was appointed Australia’s Consul-General first in Los Angeles and then New York. He has also worked as a special adviser for local lobbying firm Bespoke Approach.

His political return comes only weeks after party members in Colton soundly rejected the candidacy of Dean Brown’s son Alex, who stood for preselection against Marshall’s anointed candidate Matt Cowdrey.