The Liberals have traditionally used kid gloves when sparring with the popular senator – who launched his rebadged party on the weekend – leaving Labor and the unions to land the most telling blows.

An ALP campaign on penalty rates took some skin off Xenophon before the 2014 election, but it was a scrap from which the Opposition appeared happy to remain aloof.

However, InDaily understands the prospect of Xenophon’s SA Best running strongly in Liberal-held seats and effectively anointing the state’s next government has prompted a strategic rethink.

Xenophon’s party is likely to target Hills areas sharing a footprint with the federal seat of Mayo, which NXT candidate Rebekha Sharkie seized from the Liberals at last year’s double dissolution poll.

That will put the likes of Heysen, Davenport, Kavel and Finniss in the frame, along with Mawson. While the latter is Labor-held, it is nominally Liberal under a proposed boundary redistribution, so a Xenophon gain would still ironically come at the Liberals’ expense.

The new approach was showcased by Opposition Leader Steven Marshall today, who sent a text message to the hosts of an ABC Radio Adelaide interview with Xenophon, demanding to know how many policies the senator would commit to develop ahead of the March 2018 state election, and pondering whether federal staff entitlements would be used in formulating state-based policy – a point Xenophon described as a “cheap shot”.

“They’ll be delivered without federal staff entitlements… I like Steven but it’s a pretty cheap shot,” the senator said.

But Marshall told InDaily the question of policy was a pivotal one – signalling it will be a point on which Xenophon’s candidates will be battered by Liberal propaganda.

“Never before has SA needed a majority government with a reform agenda as much as it does now,” he said.

“My real concern is that we end up with a minority government which is unable to drive the reform agenda SA actually desperately needs… the people of SA need to be very careful about where they put their vote.” 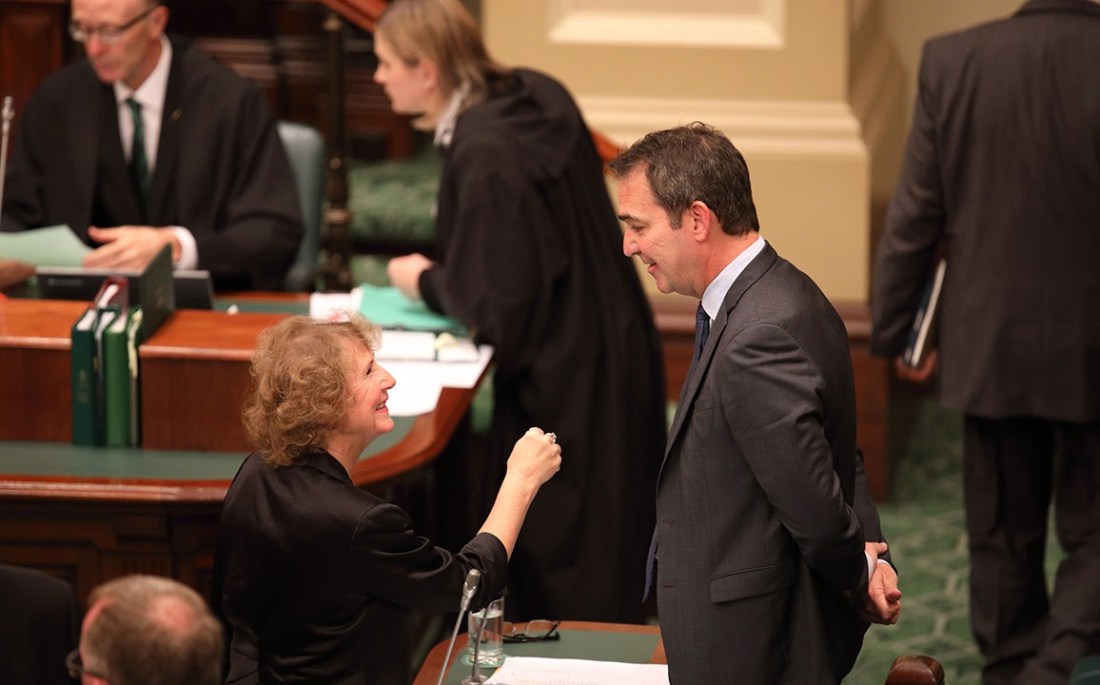 Steven Marshall shares a word with Isobel Redmond, his predecessor as Opposition Leader and outgoing MP for Heysen – where Xenophon’s party is expected to poll strongly. Photo: Tony Lewis / InDaily

He said Xenophon had “now announced his aspirations to hold the balance of power in the [lower] house where government is formed”.

“Every single policy would need to be taken past a third party holding the balance of power – that spells disaster for the people of SA,” he said, warning against a “hung parliament that’s hung out to dry by independents with populist policies”.

“It’s incumbent on him then to make it very clear what his policy positions are across 53 portfolios.”

Marshall has previously noted that the Liberal Party would be unveiling a broad suite of major policies between now and the election, and he said today that “policy work takes up a huge amount of resources”.

Four out of Xenophon’s five MPs were elected at federal level, which means most of their resources are funded from Commonwealth coffers.

Marshall also demanded the party’s candidates indicate who they will preference, so voters are “fully informed”.

The scenario the Liberals face is a complex one – each Opposition-held seat Xenophon targets becomes akin to the 2014 Fisher by-election, in which independent Daniel Woodyatt snared broad support with the backing of former incumbent Bob Such’s widow Lyn.

The Liberals campaign targeted Woodyatt more heavily than Labor, in a bid to ensure he finished in third place. Had he pipped Labor to second, he would have won the seat easily with ALP preferences.

The same potential situation looms in each of the Hills seats – the Liberals must likely win more than 50 per cent of the primary vote or ensure Xenophon’s candidates finish in third place.

However, it’s a tightrope scenario for the Liberals; in a general election they will not have the luxury of tailoring such a campaign to individual seats, with the broader statewide message geared to pushing Labor’s vote as low as possible.

Xenophon told ABC radio it was “a bit arrogant to say we’re going to get people elected”.

“We need to convince people to vote for us, that we have better policies than the major parties, and that involves a lot of doorknocking, a lot of campaigning and we won’t have anywhere near the resources of the major parties,” he said.

However, he appeared bullish about the Hills region, noting “Rebekha Sharkie had a stunning victory in the seat of Mayo and on the basis of that victory, the basis of Rebekha’s incredibly hard work in that electorate, there’s a real chance that we could pick up some seats”.

Xenophon has long committed to running between six to a dozen lower house candidates, today indicating he would also focus on “traditional Labor seats” in the northern suburbs.

“I think that the northern suburbs of Adelaide have been let down on a whole range of issues, have been ignored,” he said.

“We’ll [also] look at those western suburbs seats where the Queen Elizabeth Hospital is having its services stripped away, including the cardiology unit… which is a real issue in terms of locals not getting the health services they deserve.”

Labor is vulnerable in the western seat of Lee, where Stephen Mullighan’s margin has been stripped back by the pending redistribution. Another ALP rising star, Corrections Minister Peter Malinauskas, is attempting to enter the lower house in the neighbouring safe seat of Croydon, from which Speaker Michael Atkinson is retiring.

While Xenophon has long refused to suggest who he would back in the event of a hung parliament, he didn’t baulk at the prospect of holding the balance of power, dismissing Premier Jay Weatherill’s assertion that he would not govern in a such a situation.

“I’ve heard that too many times before and it’s something that the major parties always say, but when they’re faced with the reality of having to form a minority government they all roll their sleeves up,” he said.

“SA has not been travelling well for a number of years and I think that goes to poor governance, poor opposition and there is a real vacuum out there for a voice from the political centre.”