And the Premier believes the South Australian public will reward his own Government at the 2018 election for courting “political risk” with contentious changes to the state’s healthcare system and a royal commission into the nuclear fuel cycle.

In an interview with InDaily that signals a brutal tone of debate for the approaching state election campaign – and suggests Labor is stepping up its attacks on Liberal leader Steven Marshall as that campaign gears up – Weatherill took aim at what he says is a continuing “small target strategy” by the State Opposition, which he branded “craven, lazy and indolent”.

But the Liberals have branded the suggestion “ridiculous”, arguing they have taken a lead in the policy debate by committing to reinstating emergency services levy (ESL) remissions, reforming high schools to begin in Year Seven and imposing rate caps on SA councils.

It can also be revealed Liberal MPs have been charged with drawing up policy blueprints ahead of a party-room conference later this month, which will formalise the Opposition’s policy agenda to take to the election.

Weatherill argued his own federal leader, Shorten – with whom he was at loggerheads over the nuclear debate and further GST reform – only “started looking like a leader when he promulgated negative gearing policy” in February, four months before the federal election.

“From that point onwards he grew in stature, and it gave him confidence to do the next thing,” he told InDaily.

“It takes some courage to prosecute your ideas and defend them, [but] there’s political risk and political reward… what we need at the moment is people to take political risks.

“We’re reforming our public hospital system, we’re restructuring the way in which services are provided in every public hospital in the state – that’s good policy, but it has risk written all over it.

“The nuclear fuel cycle royal commission’s got political risk written all over it. We haven’t shirked any of the big public policy [questions].”

Labor’s Transforming Health reforms have been the subject of intense scrutiny of late, while its linchpin new Royal Adelaide Hospital is being tarnished by an ongoing Supreme Court spat with the consortium building it.

“Of course it’s easy to find somebody that’s prepared to complain about change,” Weatherill insisted.

“You wouldn’t say the doctors, as a class, are a traditional Labor-voting constituency, and a number of them have absolutely decided to campaign against these changes, because it involves them doing different things… we’re changing the system because that gives us better quality of care; that causes inconvenience to doctors, they complain, they campaign strongly and that causes political pain for us – doctors attacking politicians, of course it does!”

But Weatherill insists his Government has “courageously” implemented the reforms “because they’re in the interest of the state”.

“And I think ultimately people will give credit to people that are taking on the big decisions,” he insisted.

“There will always be complaints around the edges, but in their heart of hearts they understand somebody’s got to tackle these big questions.”

In the wake of a draft electoral boundaries review that former Liberal leader Iain Evans described as “bullshit” in a recent InDaily article, the Premier argues the Opposition “just wanted to be handed Government without actually having to do any of the heavy lifting”, suggesting the Liberals were annoyed they “didn’t get a 50-metre penalty in front of goal from the redistribution”.

“There’s basically been this long-term strategy of not revealing policies or programs [and] they’re slapping each other on the back saying, ‘We were robbed again’,” he said.

“They basically want to have it handed to them – it’s just absolutely lazy and indolent; it’s like, ‘It’s my turn’. It’s just pathetic and juvenile.”

The ABC reported this week that a leaked Liberal policy document revealed the Opposition had considered a “jobs bonus” grants scheme similar to – but smaller than – the one announced by Labor in the state budget.

Marshall, who is currently on annual leave visiting his son overseas, subsequently criticised the budget measure as “an absolute drop in the ocean”.

Marshall’s deputy, and acting Liberal leader, Vickie Chapman said the document “doesn’t surprise me [because] there’s hundreds of them out there that people are talking to stakeholders about”.

“That’s not a sign of laziness, that’s a sign of enthusiasm… and good on Steven for cracking the whip,” she said.

Chapman conceded that a “small target” strategy had been preferred “under previous leaders” but insisted “under Steven that’s not been the case”. 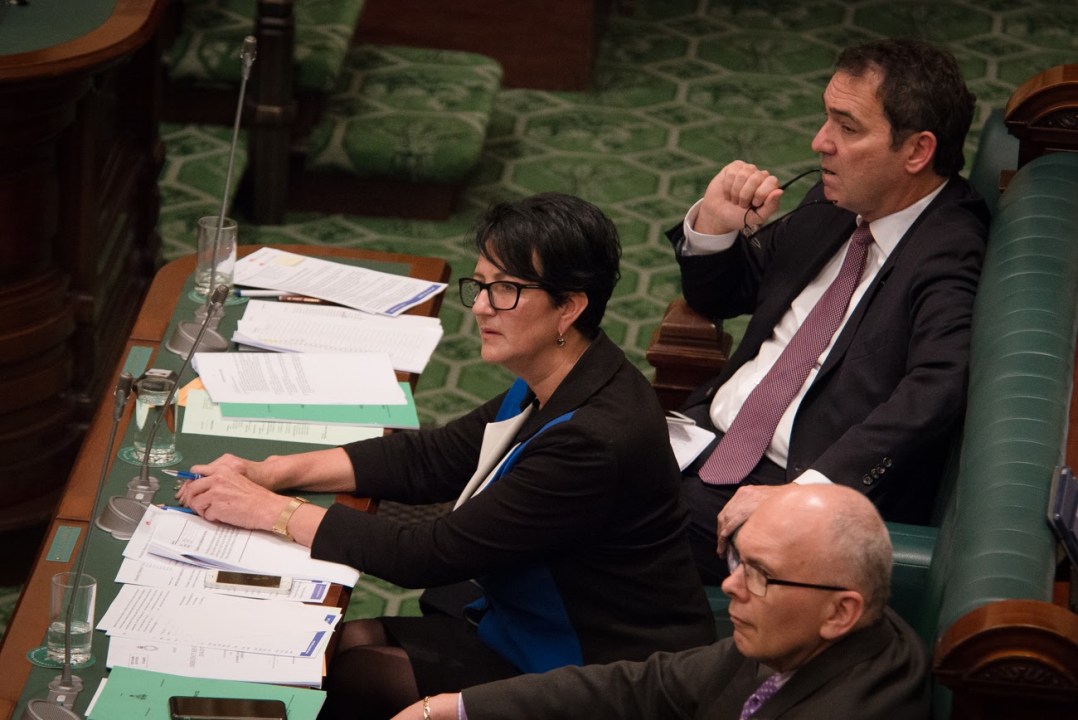 “He’s made some major statements of controversy,” she said, pointing to the ESL, school reforms and rate capping, as well as the Opposition’s long insistence on separating child protection from the Education Department and establishing a Children’s Commissioner with investigative powers – both of which are now happening.

She said Labor’s strategy was predicated on “harvesting money” from the public “and when you’re bleeding saying, ‘We’ll give some back’”.

“I think Steven’s been masterful in his commitment to saying, ‘No, we’ve a totally different approach here: stop suffocating people in the first place’,” she said.

“I feel a vastly different approach from Steven [to previous Liberal leaders].”

And she insisted that difference would be widely noticed “when we have a chance to be able to sell that message”.

“The federal election is out of the way now, so there’s more oxygen to do that.”

Chapman denied reforms such as Transforming Health would be a boon for Labor, saying “that’s been exposed as a monumental disaster and the new build, which is now hamstrung in the Supreme Court, will be another financial disaster”.

“Every day somebody’s screaming about how this new policy is not working… none of those things in Transforming Health is going to rescue this Government from what’s been a gross mismanagement,” she said.

On the nuclear issue, Chapman said: “Weatherill scans the world and tries to find an idea, then thinks, ‘I’ll be bold and brash about this’ – but he’s years late, so it just becomes a sideshow.”

She said Liberal parliamentarians had been “looking at policy options in preparation for our conference in three weeks’time”.

“Everyone has been given instructions to review what policies they’re looking at… in my time in parliament, I’ve never seen [such] pressure on the team to investigate, assess and deliver on policy initiatives.”