The safe Liberal seat, which covers 92 per cent of South Australia, is at risk of falling to the Nick Xenophon Team, with Port Augusta Mayor Sam Johnson blaming the Federal Government for taking it for granted.

Rowan Ramsey holds Grey with a 13.5 per cent margin but Johnson warns if he manages to hold on it will only be narrowly, saying local voters are sick of being overlooked.

“When we had the closure of the Port Augusta Power Station, the Liberals were invisible,” he said.

“With Arrium, there was a sheer lack of advocacy and action.”

After Labor last week committed $100 million to the steelworks, Prime Minister Malcolm Turnbull yesterday pledged a $49.2 million loan for new machinery to help Arrium remove waste materials and produce a higher-grade ore, a measure he said would add $241 million to the troubled steelmaker’s cashflow over the next five years.

Beyond the future of the iconic operation becoming an electoral flashpoint in SA, it’s no surprise both parties have focussed largesse on the area, with polling earlier this month suggesting NXT candidate Andrea Broadfoot would defeat Ramsey by 54-46 per cent and attract 38 per cent of first preference votes. 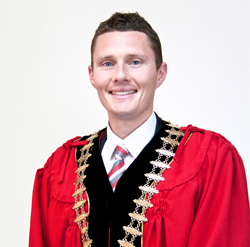 Johnson, a Liberal Party member, said the loss of thousands of jobs in the Upper Spencer Gulf Region over the past few years made voters hungry for change.

“The most common question we heard [at a recent a forum] is: ‘Who should we vote for to get a marginal seat?'”

“You should never, ever take a seat with a big margin for granted.”

Johnson told ABC891 this morning his “gut feel” was that the seat would become a marginal after July 2, “whether it’s a Liberal retain [by] 2 to 3  per cent, or Xenophon win with a margin of 2 to 3 per cent”.

But Ramsey hit back, reportedly suggesting off-air to ABC presenter Matthew Abraham that Johnson was positioning himself for a run at the seat.

Ramsey’s office told InDaily the MP was “really busy” today and would not return calls.

“Funny that, Rowan has never actually asked me that question himself and we’ve never even had that conversation,” Johnson responded.

“Would I take the seat of Grey? At the moment I’m committed to being the Mayor until 2018 [but] when 2018 presents itself would I consider it? Absolutely. [In] what capacity I would consider it, I have no idea.”

He said he would consider running as an independent Liberal, revealing he had been inundated by calls from party MPs and officials since venting his thoughts on radio this morning, “because it’s not what they want to hear”.

“Let’s go right back to Nyrstar in Port Pirie… and when they needed help, that’s a one industry town, and at that point in time there was minimal support.”

He said former mayor Geoff Brock – now a member of the Weatherill cabinet – “will back my comments that Pirie was on a knife edge and it was the State Labor Government that actually came in and underwrote the deal and saved them”.

“I went through the Alinta closure last year and we’re still going through that transition at the moment… and the question was put to me by council staff just recently, ‘Can you name what the current Federal Government has done for Port Augusta since the Alinta closure?’ Johnson said.

“And I looked like a rabbit in the headlights and it was pretty embarrassing at that point in time.”