It’s not a happy camp in the Liberal state electorate of Waite.

First there was two years of uncertainty over the future of their local MP Sam Duluk, who’d been fighting a basic assault charge stemming from his behaviour at a drunken parliament house 2019 Christmas Party.

Then, having been acquitted of the charge, Duluk wasn’t exactly warmly welcomed back into the Liberal fold, and finally opted to run as an independent in the southern suburbs/foothills seat after Greens MLC Tammy Franks levelled a bunch of other accusations his way under parliamentary privilege.

But to cap it all off, the battle to decide who succeeds him as the Liberal Party’s candidate (with, of course, a state election not too many sleeps away) is shaping up as one of the most bitter and divisive in the organisation’s long history – which, let’s face it, puts it up against some pretty stiff competition.

There are four nominees in the preselection contest: Mitcham councillor Adriana Christopoulos, a former Labor staffer and candidate who also tried her luck with SA Best before seeing the Liberal light; nominal centre-Right candidate Melissa Jones and former party vice-president Cara Miller, who previously co-owned medical business Sound Radiology, which was bought out and rebadged last year after going into voluntary administration.

The party’s Right faction – from which Duluk himself hailed – has only one hopeful: high-profile city councillor Alexander Hyde, a staffer to outgoing Boothby MP Nicolle Flint.

Moderates in the party have been long agitating for change in the seat, but were stymied in attempts to hold an early preselection, with the conservative-leaning local SEC [state electoral conference] writing en masse to the state executive demanding no action be taken until Duluk’s court proceedings were dealt with.

Miller herself took the unusual step of establishing a separate branch within the Waite SEC, in Brownhill Creek (a suburb, according to critics, notable for having no enrolled Liberal members whatsoever).

But things blew up overnight, with the SEC president Malcolm Post firing off an extraordinary email to his members.

“I have recently been advised that the Waite pre-selection meeting is likely to take place on Saturday 13th November 2021, when a suitable venue can be found to accommodate you and observers, under current COVID-19 rules,” he begins, relatively uncontroversially.

“You may have seen the original date for the vote published as a week earlier.”

But the third line’s the kicker.

“The delay has occurred as result of the Candidate Review Committee (Comprising Lou Crotti, Solicitor and Chair of the Constitution Committee, Legh Davis, State President and Sasha Meldrum, State Director) needing to undertake further screening of a candidate.”

Without going into much detail, Post explains that under the CRC process “each candidate must fully disclose any past or current, personal or business issues that may cause embarrassment to the Liberal Party once they are selected as the Candidate and/or the become a Member of Parliament”.

“They are also required to sign a Statutory Declaration under the Oaths Act answering several pertinent questions,” he continues.

It’s understood that Post is entitled to ask the prospective candidates questions directly before the CRC process is completed, and quizzed Miller about a longstanding civil court action brought against her by her late husband’s family relating to her disbursement of his estate, in particular a 40 per cent shareholding in the now defunct Sound Radiology.

Miller, however, told InDaily she had not been asked to provide the CRC any further information regarding her nomination, and asked whether she understood the delay to be related to the recent court proceedings, replied: “No.”

But Post’s email went on.

“I have also been made aware that a pre-selection candidate is making comments about my ineffectiveness as the president of the Waite Branch and SEC,” he wrote.

“I believe that the specific criticism is that Waite held no meetings, and it was therefore necessary to attempt to create the Brownhill Creek Branch.”

He argued he had made it clear that non-AGM meetings would not be held after a particularly fraught gathering of the Waite SEC in early 2020 – at which members voted to inform the state party they were backing Duluk – was secretly recorded, with the audio “leaked to InDaily and the ABC”.

“This caused Sam, the Liberal Party and some members great discomfort as the confidentiality of the meeting and their comments was betrayed and worse, made public,” Post wrote.

“Discussion between the State Director and I concluded that your privacy needed to be absolute, and as we could not guarantee your confidentiality, no meetings were to be held, apart from the AGMs.”

Post said that “several Liberal Ministers and State Parliamentarians” had also declined invitations to address the branch, “for fear of being recorded and then exposed to the press”.

“At no stage did any member of the proposed new Brownhill Creek Branch approach me with any concerns about my Presidency,” he said.

“While I would never attempt to influence how you vote, I will say the following: one of the candidates has made several attempts to access the SEC membership list in the past two years – to what end I am not sure.

“This was done either by volunteering ‘to help the Membership Officer’, or by putting up a motion at the 2020 AGM for there to be more than one membership officer.”

He finishes with a dig at the fledgling Brownhill Creek branch, noting that its predecessor – the Urrbrae/Springfield Branch – “was closed some years back with members’ consent, because it was ineffective, duplicated events and created double the reporting paperwork”.

InDaily asked Miller if she had raised questions about Post’s presidency, had sought to access the SEC membership list and whether she was the candidate referred to in relation to the extended CRC process.

She responded via SMS with a very Margaret Thatcher-esque: “No, no, no.”

“In regards to an email sent to SEC members last night,” she went on, “I can’t make any further comment as it is an internal matter”.

“My focus remains on the preselection process,” she said. 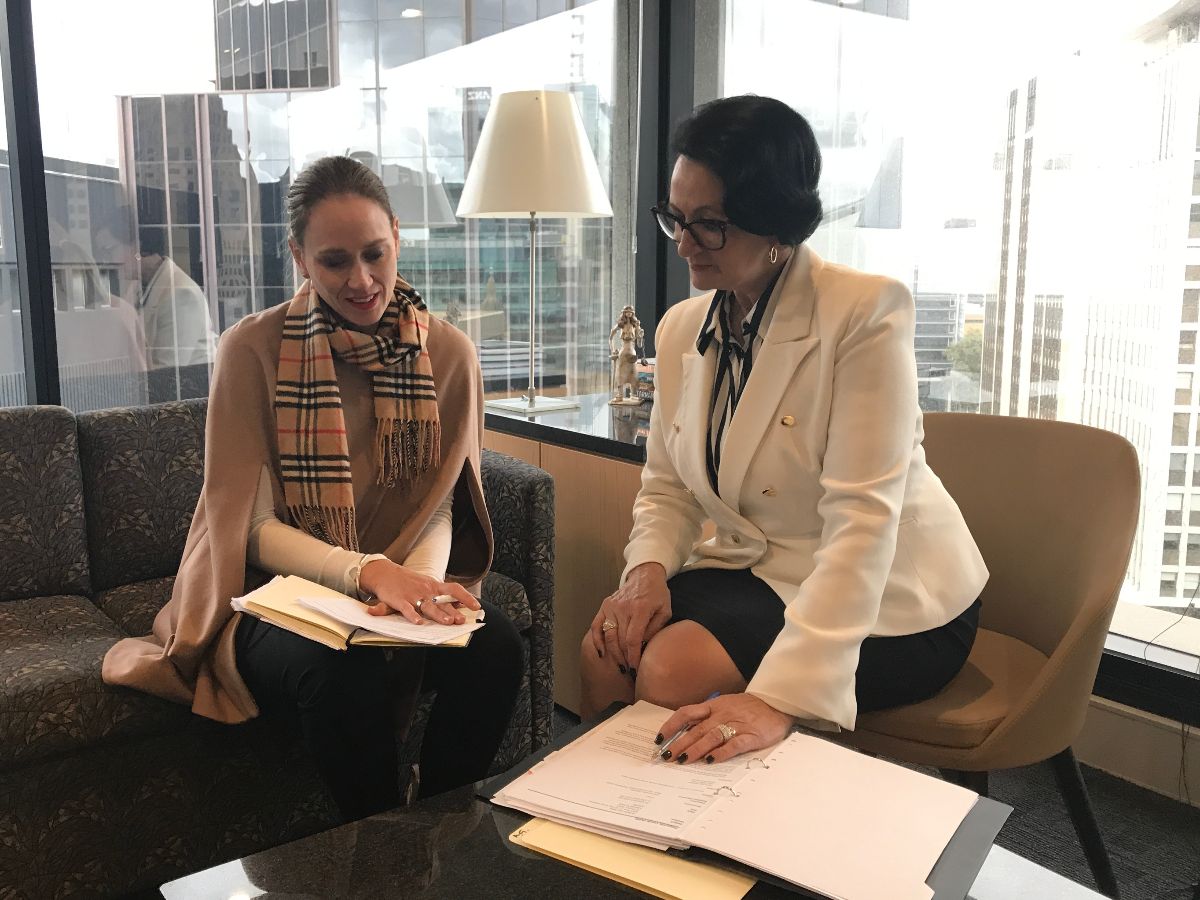 Miller with Liberal deputy leader Vickie Chapman, in a photo distributed as part of her 2019 vice-presidential campaign.

Still, at least some of the Waite fraternity seem to be getting along ok – with Duluk and his one-time confidant Hyde spotted chatting amiably at the Blackwood RSL on the weekend.

Both men insist they were just there to support the local covers outfit, the Porter Bay Band, one of whom is a local branch member.

“I ran into the Member for Waite at the Blackwood RSL, of which I am a member and so is he,” Hyde tells InDaily in a statement.

“That was after I attended an Army Band concert for Veterans’ Health Week earlier in the day at the Repat.

“It was a great afternoon of 60s and 70s live music at the RSL and there were more than a few Liberal members and supporters there.”

And then he adds for good measure: “It’s a shame the other candidates weren’t there too.”

Hyde continues: “It’s normal for opponents to chat with each other, MPs do it all the time, and especially so when you’re out and about in the community so much – I don’t think it needs to be a storm in a schooner.”

As for Duluk, he says he’s “happy to talk to anyone at the Blackwood RSL, where I am a patron”.

But the private chat has, unsurprisingly, raised eyebrows in Liberal circles – as has the fact that a blurry photograph of the pair has been doing the party rounds, and shared with particular eagerness by members who aren’t fans of either aspirant.

And to think the party thought it had trouble in Waite in the days of its former incumbent Martin Hamilton-Smith!