SA senator and Liberal Right-winger Alex Antic loves a good crusade – particularly so when it allows him to deride the socially ‘woke’.

In his city council days, he championed a bid to remove a proliferation of ‘love locks’ from the Adelaide University footbridge, arguing the engraved public displays of affection were compromising the structural integrity of the overpass.

He’s also fired up against major sporting codes for their social justice advocacy, arguing it distracts from their “core business” of kicking pigskins around fields.

Antic’s latest venture into the arena of the Woke comes in the form of a video uploaded to his Facebook page, wherein he and National Party senator Matt Canavan take turns deriding a Melbourne-based activist’s bid to change the name of the popular Golden Gaytime ice-cream.

“The latest news out of Wokeland today is that a Melbourne activist has started an online petition to change the name of the great ice-cream Gaytime,” Antic tells his viewers, before the pair enjoy a pair of the icy treats in a brave show of defiance against the cancel culture warrior hordes.

“These incursions on language may seem trivial on the surface but in truth there’s an argument there’s something more insidious going on here,” Antic later told ABC Radio Adelaide, comparing the “totalitarian trend” to Stalin airbrushing his opponents from history.

“We’ve effectively created a social licence for people to feel offended – we’re now seeing an ‘offence scavenger hunt’ of people almost trying to find ways to become offended so they can prosecute arguments which really are attacks on Australian institutions,” he said.

For his part, Canavan said he was “sick and tired of people who have nothing better to do than trying to change our language”, noting successful campaigns against lines such as Coon Cheese, Chicos and Redskins.

ABC tried commendably to achieve editorial ‘balance’ in its coverage this morning by calling in gay state Labor MP and noted ice-cream connoisseur Ian Hunter for the rebuttal.

However, while Hunter questioned the timing of Antic’s antics – calling the post a “classic case of political deflection when your mob’s got real issues to deal with” – he doesn’t advocate changing the Gaytime moniker either.

“It’s so childish and juvenile [but] in terms of the issue of changing the name I don’t think it’s in the same category as Coon Cheese,” Hunter told InDaily.

“Whilst I’m supportive of the chap who wants to take up this issue [the Change petitioner known only as ‘Brian Mc’], I just don’t agree with him.”

Hunter notes that “I don’t speak for the gay community and I’m not a young gay any more” but adds that in his social circles “I haven’t heard any clamour to change the name”.

Having said that, he’s no fan of the Streets snack per se.

“I’ve never really enjoyed it,” he said of the biscuit-coated frozen treat, saying its iconic status was “all in the label”.

According to Hunter, the outer “honeycomb” – which is in fact a biscuit crumb – is “soggy”, while the outer coating lacks a “nice choc crunch”.

And as for the sweet, sweet innards, he laments there’s “not a lot of flavour in it”.

It’s not the first time Hunter has disagreed with the federal Libs – as state Water Minister in 2016 he famously unleashed a potty-mouthed tirade at then-Acting PM Barnaby Joyce in an Adelaide eatery before storming off for a quiet ice-cream. 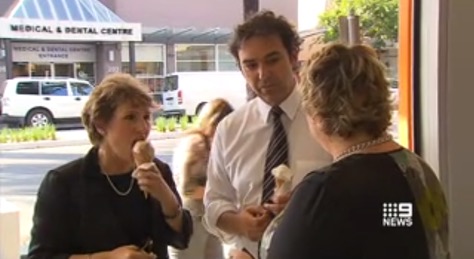 We don’t have a photo of Ian Hunter eating his ice cream, but here is Isobel Redmond and Steven Marshall instead.

He revealed for the first time to InDaily today that his dessert of choice that night was a “raspberry mango gelati”, but he insists his ice-block of choice is always a lemon icy-pole.

Which is really the nub of the matter, he points out – “different tastes for different folk”.

“I don’t want to cancel anyone who wants to eat a Golden Gaytime – I think they should be allowed to.”

While his federal colleagues rail against Cancel Culture, state Environment Minister David Speirs appears to be cancelling himself.

Speirs has a history of getting testy with online critics he accuses of ‘trolling’ him, last year reportedly calling one such interrogator personally and threatening her with a costly defamation suit – although he later texted her, conceded he was “grumpy and frustrated” and offered to discuss her complaint further over a “cuppa”.

But Speirs appears to have continued his online troll-hunting adventures, this time wading into a debate over proposed soccer pitches on the south-west corner of the Belair National Park, on part of the land previously used for the Belair Golf Course.

The proposal by the Sturt Lions Football Club to establish a new homeground on up to 10 hectares of the precinct has met with vocal opposition from some locals – despite being still under assessment.

So it was unsurprising that a recent social media post by Speirs asking respondents “What does a cooler, greener and climate-resilient Adelaide look like to you” prompted some less-than-impressed feedback about the soccer pitch incursion.

Speirs, however, was happy to buy in.

When one poster wrote that it would “be great not to lose Belair National Park to soccer fields and car parks”, he responded: “You could say it’s been lost to a golf course for a century.”

“While no decision has been made on the soccer, I just cannot see how residents endured a golf course in the fire protection buffer zone but now won’t cope with soccer fields AND many are openly advocating the removal of a fire protection zone?

This seemed to inflame the situation (no pun intended).

When another respondent took him to task for his “narky replies”, he charged on: “Nothing narky about my replies, I’m just trying to work thru the consultation process properly instead of being shouted down by online trolls.”

Needless to say, this didn’t go down well with some on the site, but Speirs maintained that “nasty, bullying messages from faceless accounts, accusing me of having an ‘ulterior motive’ is the very definition of trolling.”

“I’m happy to have robust debate in the public arena, but I will not allow my character to be denigrated.”

He then got into an argument with a T-shirt vendor about whether the golf course’s 1937 establishment constituted the site having been open space for “100 years” or just thereabouts, but finally appeared to give up on the whole thread, which now appears to be deleted.

Another constituent, Rachael Norton, tells InDaily her own unrelated comment was removed from Speirs’ post and she was blocked from viewing his account after complaining about the Hove railway crossing upgrade.

She had been protesting the removal of 40 Norfolk pines as part of a much-vaunted upgrade, and insists there was nothing ‘trolling’ about her critique, whose most inflammatory rhetoric was a relatively gentle “Thanks! For Nothing!!” 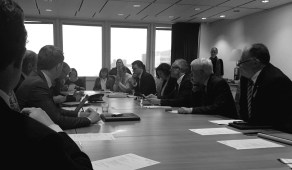 Richardson: A robust discussion about a number of different matters

“As far as I know, we live in a democratic society where people are allowed to have opinions,” Norton tells InDaily.

“I don’t think [deleting comments and blocking people] is fostering good relations with electors or with parties.”

Speirs did not answer his phone for comment today, but his opposite number, Labor’s Susan Close, was happy to weigh in.

“Temperament is an important part of being a member of parliament, and that means being able to handle criticism of government decisions without taking it personally – and recognising that your job is to listen to people, even if ultimately you disagree,” she said.

As an aside, Norton also noted that several comments critical of Antic’s pro-life stance in the recent SA abortion debate appeared to have been removed from the senator’s own Facebook post.