Champing at the bit

Long-time federal Labor backbencher Nick Champion will confirm his candidacy for the safe seat of Taylor before ALP preselections nominations close on Monday.

Senior sources have confirmed the member of Spence’s state parliament move – long-forecast by InDaily – will be formalised over the weekend: expect to see ‘The Champ’ given the same treatment as soon-to-be-colleague Tony Piccolo, whose recent shift from Light to Schubert was confirmed with a weekend media conference complete with photo op with Labor leader Peter Malinauskas, meeting locals in his prospective political digs.

Of course, the ALP brains trust will be hoping this particular seat swap works better than that one did – Piccolo shuffled off from Schubert with his tail between his legs after a mooted boundary redraw giving him half a hope of winning the seat failed to eventuate.

Malinauskas is said to be an enthusiastic backer of his Right faction colleague joining the state political ranks, with sources expecting Champion’s long wait for an elusive frontbench elevation to end soon after the March 2022 election.

It’s not often that a vacancy opens for a safe federal seat, so expect the proverbial conga-line to be forming outside ALP state secretary Reggie Martin’s door as we speak.

While Labor carves up its political empire in Opposition, its former member Frances Bedford is considering a seat swap of her own.

InDaily has previously revealed the long-time ALP maverick-turned-independent is considering shifting from the seat of Florey she’s held since 1997 (and controversially retained after quitting the party when it tried to deselect her) into neighbouring Newland, where she’ll instead terrorise incumbent Liberal Richard Harvey, who holds the state’s most marginal seat by a nominal 0.2 per cent.

The ramifications of such a shift on the broader election result are significant: Florey would automatically go back to Labor, while a three-cornered contest in Newland could shift that seat from the Liberal side of the ledger – effectively boosting Labor’s tally to 21 seats from the get-go.

Bedford, however, isn’t rushing her decision: and is now doing what all diligent local members do – consulting her constituents.

In her latest electorate brochure, she lays out the boundary changes, and asks respondents the question all of state parliament is pondering: “Which seat should I contest?” 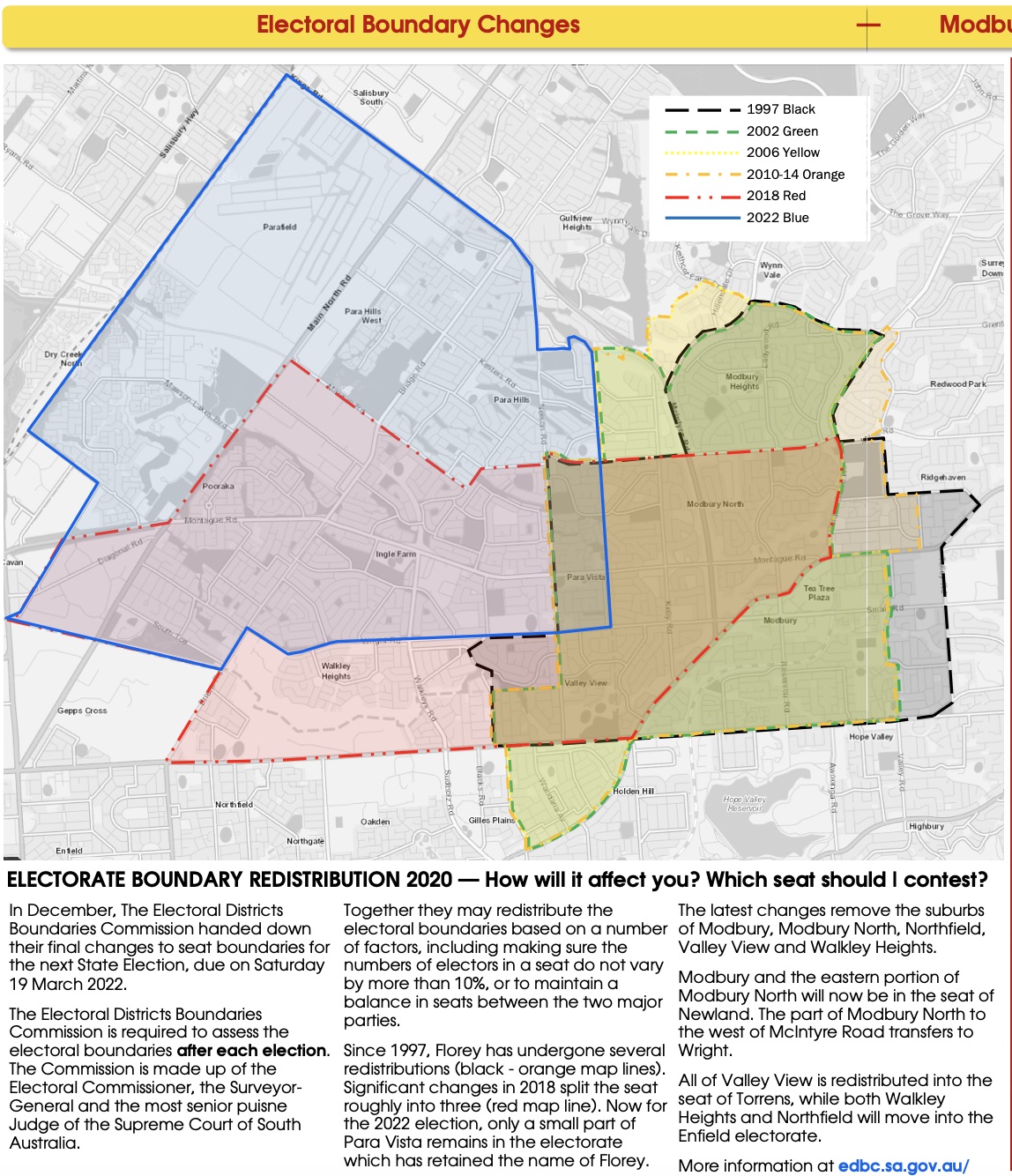 If you’re not a conservative at 35…

The Libs, meanwhile, are going through preselection turmoil of their own, with a ballot to determine their senate ticket for the next federal election to be held tonight.*

The Right don’t have a horse in the senate race, where incumbents Simon Birmingham and Andrew McLachlan will take the first two spots, with the third to be fought out between two moderates – current SA Liberal vice-president Rachel Swift and Kerrynne Liddle, a staffer for Social Services Minister Anne Ruston.

The pair also faced off last year as candidates for the party’s vice-presidency, with Liddle pulling out of the ballot on the day due to illness.

Awkward then, that she’s had to declare a brief – but relatively recent – political Achilles Heel: she was previously a member of the ALP.

Liberal and Labor sources have told InDaily Liddle was a member of the Labor Party from 2006 to 2009.

Still, as Seinfeld used to say, not that there’s anything wrong with that.

Former Liberal leader Isobel Redmond once admitted to a brief dalliance with Labor during her younger years.

And, as one party insider noted: “Remember that the Feds made Turnbull PM once!”

Liddle told InDaily that “when I was running my own business, Precise Media Management, my office was across the road from the ALP office” on Gilles St.

“I was interested in becoming involved in politics and I attended one meeting some 15 years ago, in 2006,” she said via text message.

“When I heard the unionists pushing their agenda it was immediately clear their politics and policies were not relevant to me. I never went back.”

Sources insist Liddle, who has previously run for the senate in 2016, has been “a loyal Liberal” for several years, with one arguing: “This is the first time we’ve got a real opportunity to put a strong, conservative Indigenous woman into the senate.”

Defeating Ebola: is it harder than winning senate preselection?

The Ruston-led group of moderates is backing Liddle – although, Ruston’s backing appears to transcend factional lines lately, given her recent courting of the centre Right with her endorsement of former party treasurer Michael van Dissel in Frome.

But prominent Left and Centre-Right figures are spruiking for her opponent, former Rhodes scholar and self-proclaimed “internationally respected thought leader in health and biosecurity” Rachel Swift.

Among various CV humblebrags to her state council colleagues is her modest claim about fighting a killer disease with the UN in West Africa: 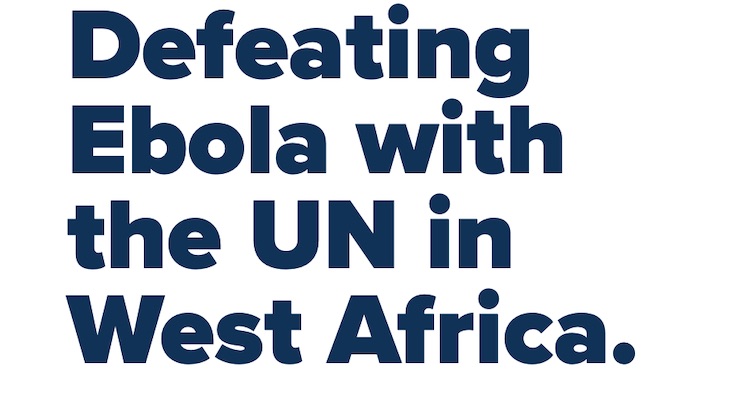 The trick to politics is a cut-through slogan.

“I joined the United Nations leadership team that had been formed to launch the UN’s first ever health mission in response to Ebola,” her campaign brochure explains.

“By day, we flew low over the jungles in choppers to far-flung parts of the country to understand what was happening where testing, phones and even running water didn’t exist.

“By day, we worked with local community leaders to design the measures that would ultimately contain the spread.

“By night, we tracked the charts and worked the phones with the leaders of governments and NGOs, unlocking the resources needed to bring the infection rate under control.”

Swift in her campaign material with parliamentarians Dan Cregan and Andrew McLachlan.

No wonder “it was touch and go for a while”.

“But the speed of the response gave us a fighting chance,” she notes.

While the Ebola outbreak in question was contained, some Lib insiders have snickered at the tenor of Swift’s claim, with one noting: “Given Ebola still exists, it’s a bit hard to say you defeated it.”

Ironically, even with no Right opponent the contest has become particularly fraught, with factional ties fraying over the looming ballot.

One source declared the standoff “a dumpster fire”, with “both the mods and the Right all over the place”.

The third spot on the Liberal ticket is considered winnable – current senator Alex Antic managed to snare a seat from the same position after rolling former Family First-turned-Liberal senator Lucy Gichuhi in 2018.